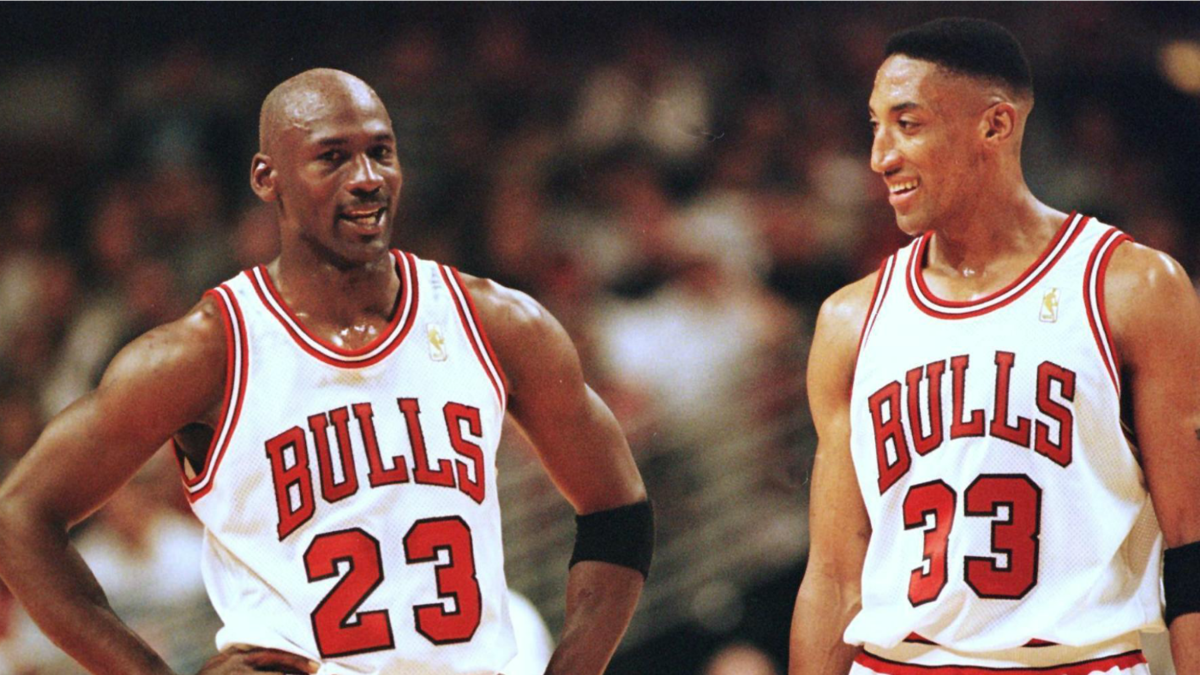 The first two episodes of “The Last Dance” — ESPN’s 10-part series chronicling Michael Jordan and the 1997-98 Chicago Bulls — were a monster hit, reportedly drawing over six million viewers. So far the focus has been on former Bulls GM Jerry Krause, who has been painted as the clear villain of the story, Phil Jackson, Scottie Pippen and, of course, Jordan.

This Sunday, Dennis Rodman will reportedly be featured in Episode 3. Rodman was not a part of Chicago’s first three titles, but he was an integral part of the second three-peat after Jordan’s baseball hiatus from 1993-95.

That two-year period temporarily opened the NBA for new rulers. Patrick Ewing’s Knicks finally made it to the Finals. The Houston Rockets won two championships. And in the opinion of Rodman, who appeared on ESPN’s First Take on Monday, Pippen capably stepped into Jordan’s shoes as the “best player in the world.”

“If you notice about Scottie Pippen, when Michael Jordan left in ’93, ’94, ’95 — Scottie Pippen was the best player in the world,” Rodman said. “If people didn’t know that, he led the team in every category. Every category. Scottie got his wings in 1991 when [the Bulls] beat the Detroit Pistons. When Michael left, Scottie took over and next thing you know he was the best player in the world. People don’t know that.”

This is particularly interesting because Pippen’s falling out with Krause was the focal point of Episode 2. Pippen has always been under-appreciated simply for existing in Jordan’s shadow, and people who don’t remember were shocked to find out he was the sixth-highest-paid player on the Bulls in 1997 after delivering five titles as Jordan’s wingman. Pippen felt disrespected that Krause and Bulls owner Jerry Reinsdorf wouldn’t renegotiate his seven-year, $18 million contract, which he signed long before he or the Bulls had turned into all-time greats.

Krause reportedly tried to trade Pippen for incoming rookie Tracy McGrady on draft night in 1997, but McGrady says Jordan axed the deal. You can understand why Pippen felt so under-appreciated, and to this day he’s seen by a lot of people as a great Robin who was never capable of being Batman. Rodman says otherwise.

It’s obviously a strong claim to say Pippen was, effectively, the second-best player in the world to Jordan by the end of Chicago’s first three-peat, but it’s not without merit. In his first season without Jordan, Pippen was first-team All-NBA and All-Defense while finishing third in MVP voting. Hakeem Olajuwon won the award, and his Rockets also won the 1994 championship while Pippen’s Bulls lost in the second round to the Knicks.

The following season, Chicago lost in the second round again, this time to the Orlando Magic. Again, that doesn’t mean Rodman’s claim is off base just because Pippen couldn’t lead the Bulls to a championship. Jordan couldn’t do that either until Pippen came along. In the end, it’s probably a bit of a stretch to say Pippen was the best player in the world, but not by much. The moral of the story is Pippen was, and still is, highly under-appreciated for the all-time player he was, and Rodman is simply calling attention to that.