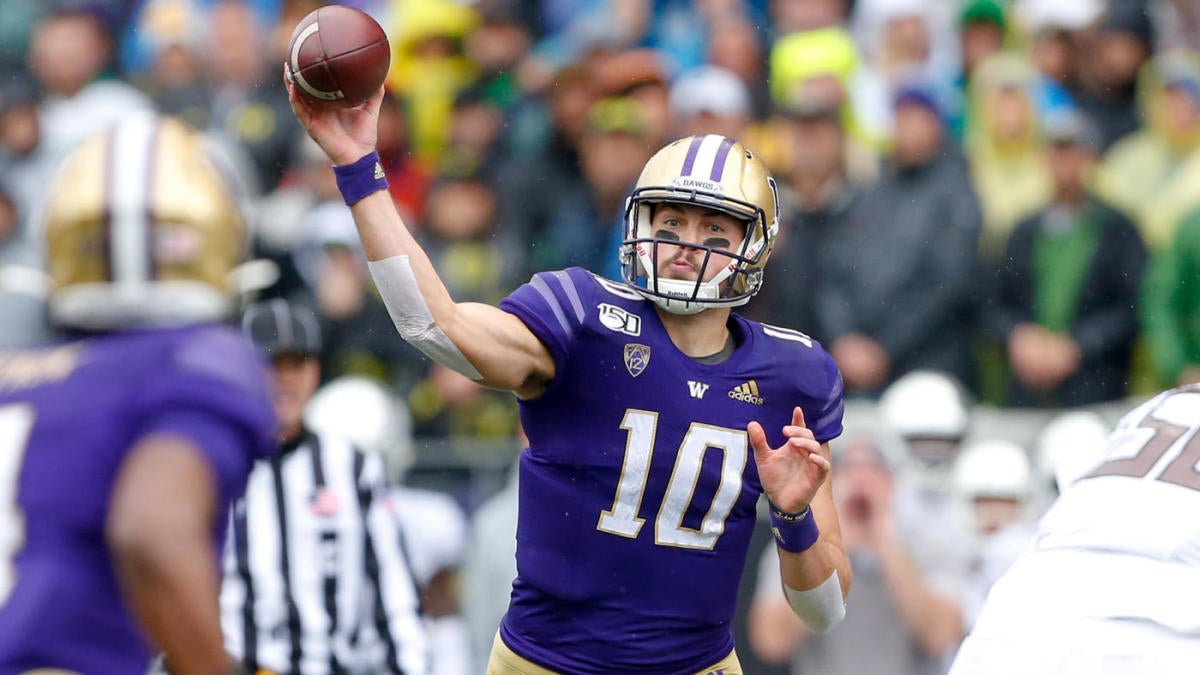 Two days of the 2020 NFL Draft are in the books but less than half of the selections have been made. CBS Sports sorted through the rubble to uncover the top 25 prospects available for selection on Saturday.

Weaver does a great job of getting off blocks and shows advanced level hand-fighting. Over the past three years, he has accumulated 34 sacks. Few, if any, edge rushers available have that level of production.

Hall dealt with some injuries this season but he shows first-round potential when healthy. The cornerback does a great job mirroring the receiver downfield and has great size.

Biadasz was once projected as a first round pick. He also dealt with some injuries this past season. Teams should value him as a potential difference maker along their interior offensive line though.

The big-armed quarterback from Washington is still on the board after watching Jalen Hurts get taken by the Eagles. Eason has a lot of upside but, why was he only a one-year starter for the Huskies if he is so good?

Muti is a star when healthy. Unfortunately for him, he has not been able to stay healthy. His medical track record is frightening and that is the only reason he is still on the board. The best ability is availability.

The Prince from Nigeria is still looking for his NFL destination. It is a bit of a surprise that he is still on the board. Tega Wanogho has stretches of exciting play on the left side. He provides some shock with his hands.

Davis-Gaither has no business being on the board. He is a modern day NFL linebacker that can cover sideline to sideline. He is a bit undersized but does not surrender any tackling ability. The North Carolina native is really instinctual.

Peoples-Jones is one of the most athletic receivers in this draft class. The problem is that the athleticism does not match his stat sheet. For having his level of talent, he should have had more collegiate production.

Driscoll is a sturdy option on the right side. He was consistent for most of the season but is not going to amaze anyone with his athleticism.

Kindley is a stout interior offensive guard that can pave roadways at the next level. His frame makes him difficult to move and he uses that to his advantage.

Hopkins is more of a pass catching tight end. His slender frame does not offer much as a blocker. The Purdue product will not be everyone’s cup of tea but he should be someone’s … and soon.

Robertson is a nickelback but that is a starter’s role in today’s NFL. He is small in stature but large in determination. He plays much bigger than his size and has a feisty attitude.

It is a weak class of interior offensive linemen and Harris is one of the best remaining. He offers versatility as an offensive guard or center. The Husky was a consistent producer and should contribute at the next level.

Pride is another prospect with a future as a nickelback. He is a really smart player capable of diagnosing plays quickly. He tested well at the NFL Combine.

Gandy-Golden has Julio Jones comparable size and strength. He is not as explosive as Jones but knows what to do with the football when it is in his hands.

Lynch was a surprise entry into the 2020 NFL Draft. He shows some explosive flashes but needs to become more consistent. The Bear is good value on Day 3 though.

Before suffering some knee injuries, Adams was regarded as a potential first round pick. He does not possess the dynamic play that once made him so promising but he plays with a mean streak.

Pinter played offensive tackle in college but should transition inside. His frame suggests that he has a future at guard. With his movement ability, he could have a pretty good NFL career.

The interior offensive line portion of the big board has arrived. Throckmorton has shown a lot of versatility and consistency at Oregon. Teams will find a spot for him next season.

Bredeson has been a rock at the heart of Michigan’s offense. There were not many good interior offensive line options early in the draft but the chickens are coming to roost on Day 3.

Strowbridge has some positional flexibility to play on the edge or inside. He performed well at the Reese’s Senior Bowl.

Stenberg plays with a mean streak, which teams love. However, he was the recipient of some unnecessary penalties last season and teams do not love that aspect of his game. He is a bit bigger than the average interior lineman but should find a home early Day 3.

Stone is a well-built safety with good instincts and ball skills. The Hawkeyes are always well-coached and that could lend him to being an early contributor for his next team.

Bryant has room for improvement as a blocker but teams in need of a tight end will find good value with him on Day 3. He looks smaller on the field but presents himself well as a pass catcher.

Pollard has a lot of positional flexibility as well. Teams love players that can fill multiple roles in a pinch because it allows them to potentially use a roster spot on another position.