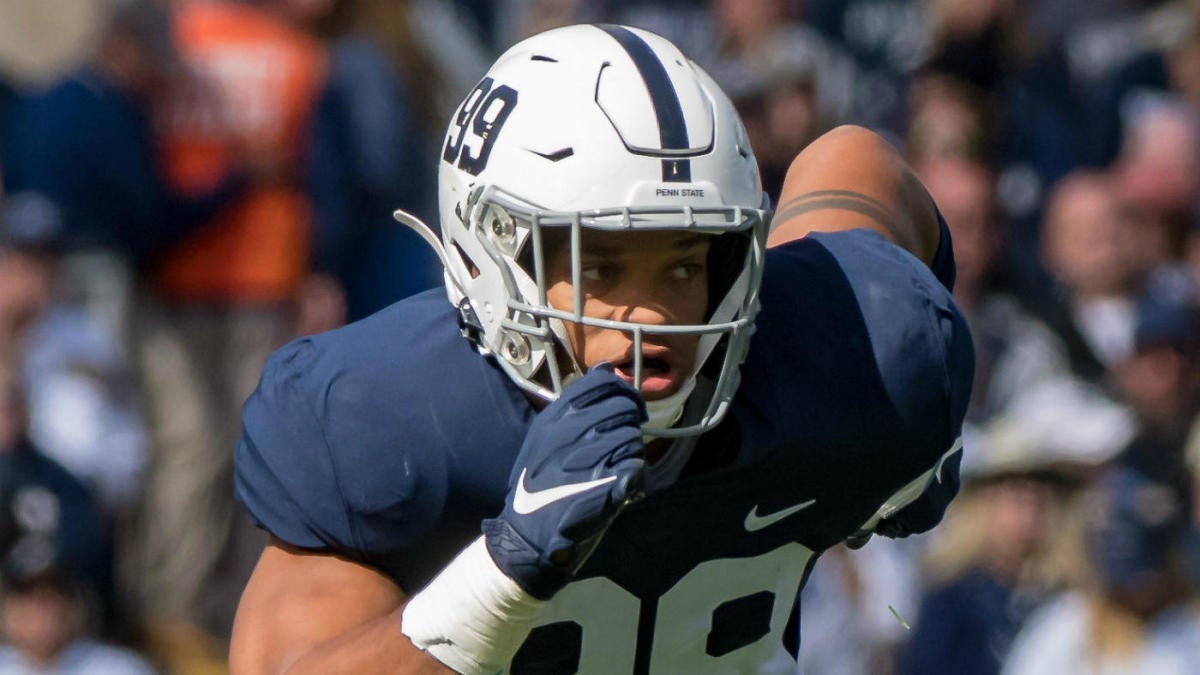 Like Day 1, Day 2 of the 2020 NFL Draft saw several teams make very strong picks that should immediately pay dividends for the upcoming season. Conversely, several other teams made some head-scratching decisions that will surely come back to haunt them in the not-too-distant-future.

Here’s a look at Friday night’s Day 2 winners and losers, a list that has several repeats from the previous day.

After inheriting a team that finished 31st in the league in scoring defense in 2019, new Panthers head coach Matt Rhule is taking drastic steps towards improving Carolina’s defense in 2020. With the 38th pick, Carolina was able to select Penn State’s Yetur Gross-Matos, a Day 1 talent and one of the top EDGE rushers in the draft. While he may not do anything at an elite level, Gross-Matos did play at a very high level at Happy Valley. An athletic player with an equally impressive football IQ, Gross-Matos recorded 17 sacks and 34.5 tackles for loss during his final two seasons at Penn State.

Carolina then traded up to the 64th pick to acquire Jeremy Chinn, one of the top safeties in this year’s draft. The 2019 Buck Buchanan Award recipient (which goes to best defensive player in the FCS), Chinn is a versatile player who should make an immediate impact on Carolina’s re-vamped defense in 2020.

Green Bay finds itself in the loser category for a second straight day. Instead of addressing their needs at receiver, the Packers drafted Boston College running back AJ Dillon with the 62nd pick and Cincinnati tight end Josiah Deguara with the 94th pick.

While Dillon put up impressive numbers at Boston College, the Packers could have used that pick on Antonio Gibson, who was a much bigger receiving presence during his time at Memphis, or scooped up some actual receiving help in the form of Bryan Edwards or Devin Duvernay. And while Deguara has some upside, Green Bay passed on selecting Dayton tight end Adam Trautman, a much more accomplished player who the Saints were able to acquire with the 105th pick.

While Florida edge rusher Jabari Zuniga (the team’s third and final Day 2 pick) is somewhat of a question mark, the Jets nailed their other Day 2 picks in Baylor receiver Denzel Mims and California safety Ashtyn Davis. After passing on a receiver in Day 1 (instead taking Louisville lineman Mekhi Becton with the 11th pick), the Jets were still able to land a good receiver in Mims, a speed demon who also scored 28 touchdowns during his last three years with the Bears.

Speaking of speed, that is also one of the attributes associated with Davis, an instinctive, physical player who should complement fellow safety Jamal Adams in New York’s talented defense.

After taking Henry Ruggs III in the first round, the Raiders oddly took two more receivers in the third round, even though the team is initially expected to use Kentucky’s Lynn Bowden Jr. more as a running back. That being said, Las Vegas could have used that pick to address other positions, as the team already has a bona fide star at running back in Josh Jacobs. And while Bryan Edwards (who was selected right after Bowden) has the potential to be a good player, the Raiders should have used one or both of these picks to address defensive needs, perhaps by selecting a linebacker or a defensive tackle.

While the Raiders’ final third-round pick was spent on a position of need, the player they picked, former Clemson safety Tanner Muse, is a linebacker/safety hybrid to leaves something to be desired in terms of pass coverage. The Raiders could have opted for one of the linebackers taken a few spots before this pick (Malik Harrison, Jacob Phillips) earlier in Round 3, or spent this same pick on either Davion Taylor, who went a few picks later, or Akeem Davis-Gaither, who is still available after two days of the draft.

Dallas enters the winners’ circle for a second straight day. A day after watching receiver CeeDee Lamb fall to them with the 17th pick, the Cowboys were just as fortunate on Day 2. With the 51st pick, they were able to acquire former Alabama cornerback Trevon Diggs, a Day 1 talent who helps the Cowboys fill the void left by Byron Jones‘ departure in free agency. Diggs could have easily been the team’s first-round pick had Lamb not been available.

The Cowboys, who needed to address their defensive line, were then able to pick up former Oklahoma defensive Neville Gallimore, the fourth-ranked defensive lineman and the 36th-best prospect in the draft, according to CBS Sports. Both players should make an immediate impact for the Cowboys, who significantly improved their roster during the first two days of the draft.

Miami possibly reached with the 39th pick, taking former Louisiana guard Robert Hunt (the 17th-best lineman and 86th-best prospect per our rankings) instead of LSU’s Lloyd Cushenberry, a higher-rated prospect that was eventually selected by the Broncos in the third round. The Dolphins also passed up on the opportunity to select former Wisconsin running back Jonathan Taylor, who was taken by the Colts with the 41st pick.

Miami didn’t address the running back position at all on Day 2. Instead, they spent their picks on two defensive players that have several big question marks. With the 56th pick, Miami selected Alabama defensive lineman Raekwon Davis, a formidable run-stuffer but not a necessary good pass rusher. The Dolphins spent the No. 70 overall pick on former Texas safety Brandon Jones, a player that has potential but has too many red flags (has as small frame, is not very good in run support) to be taken with that high of a pick.

While they only had one pick on Day 2, the Cardinals made that pick count, selecting former Houston offensive tackle Josh Jones with the 72nd pick. The fifth-best lineman and 17th-best prospect in the draft, Jones, a four-year starter in college, has the potential to become one of the NFL‘s top offensive tackles for years to come, and he immediately upgrades the right side of the offensive line in Arizona.

Making this pick even more sweet is the fact that the Cardinals passed on selecting a tackle in the first round, instead using the eighth overall pick on Isaiah Simmons. While that move was risky, it ultimately paid off for the Cardinals, who were able to acquire two players who will be expected to make immediate impacts in 2020.

Like the Cardinals, Washington only had one pick during the second night of the draft. But unlike Arizona, the Redskins didn’t make the most of their pick. Instead of using the 66th overall pick on either a linebacker or a defensive back, Washington instead chose  former Memphis running back Antonio Gibson, a player that was more productive as a receiver than as a running back during his time with the Tigers.

While Gibson may end up giving the Redskins’ offense an added dimension while also making life easier for Dwayne Haskins, Washington is already set at running back and would have been better served using the pick filling one of actual needs. Chase Young was a great start to the draft on Thursday, but with another day in the books, they haven’t done much else to address the issues with a roster that played poorly enough to earn the No. 2 overall pick.

Like the Cowboys, the Vikings were the beneficiary of having players with Day 1 talent fall to them on Day 2. With the 58th pick, Minnesota was able to acquire former Boise State lineman Ezra Cleveland, who, according to CBS Sports NFL draft analysis Chris Trapasso, is the “perfect fit” for the Vikings‘ zone-blocking scheme because of his “high-level short-area athleticism.”

Minnesota, who was able to select former TCU cornerback Jeff Gladney near the end of the first round, was able to further add to their cornerback room on Friday night, drafting Mississippi State’s Cameron Dantzler with the 89th pick. While his size (he’s only 188 pounds) and unimpressive 40 time at the combine likely led to him being available in the third round, Dantzler possesses plenty of upside that includes his natural ball skills, versatility and a feisty attitude that should serve him well at the next level.

The Vikings capped off their successful Day 2 of the draft by acquiring four Day 3 picks from the Saints in exchange for the 105th pick. Minnesota enters Day 3 with a staggering 13 draft picks.

While former Mississippi State linebacker Willie Gay Jr. (the 63rd overall pick) fills a need on defense, the Chiefs should have used that pick on a cornerback, as Kansas City still hasn’t addressed arguably their biggest need heading into the final day of the draft. Kansas City’s second Day 2 pick, former TCU lineman Lucas Niang, was a great value but is developmental pick that is not supposed to make any sort of impact in 2020.

The Chiefs are coming off a Super Bowl win, but while other title contenders made clear upgrades to their 2020 rosters on Day 2, Kansas City might have lost some ground in the race to build a Super Bowl LV winner.