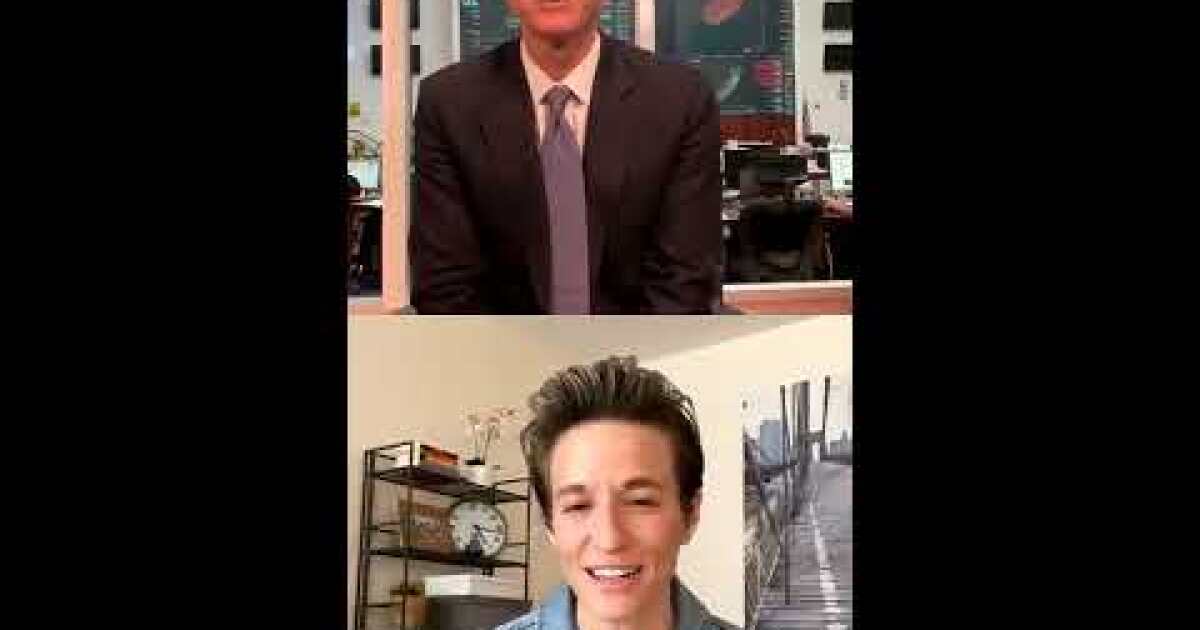 California Gov. Gavin Newsom, facing discontent in some parts of the state over his COVID-19 policies, received a warm embrace from World Cup soccer champion Megan Rapinoe during a 30-minute Instagram chat Thursday in which he urged people to hold on just a bit longer.

Rapinoe, the reigning world player of the year, grew up in conservative Shasta County, where just 27 people have tested positive for the virus. And her conversation with the governor touched on such hot-button issues as Newsom’s shelter-in-place order, aid to undocumented immigrants, coronavirus testing and the gender-discrimination lawsuit Rapinoe and her teammates have filed against U.S. Soccer, the questions were largely softballs at which Newsom took a healthy hack.

Addressing the stay-at-home order, now ending its fifth week, Rapinoe admitted the edict was “making people a little bit stir crazy,” especially in rural towns such as Redding, where her family lives. But, she added, by acting quickly — California was the first state to require residents to stay home — Newsom “look[ed] like a genius” by slowing the spread of the virus and flattening the curve.

“We’re so close to sort of really turning the page at just the moment where people are saying, ‘It’s a beautiful weekend, the beaches, they’re calling, these parks and playgrounds,” the governor said. “And so we just really can’t impress upon people more gratitude for doing the right thing. Not only for themselves, but for the community and for the state and each other.

“All we ask is to go out of this way we came in it: and that’s together.”

Rapinoe is well-known for both her political protests, such as taking a knee during the national anthem, as well as for her civic and community work. She has long donated part of her salary to soccer-centered charities around the world, partnered with the Boys and Girls Club and raised awareness around issues such as LBGTQ rights and pay inequality. She raised more than $150,000 in 2018 for victims of a wildfire near her parents’ Northern California home, even though her sexual orientation and politics have made her an outcast in the neighborhood.

During Thursday’s conversation, Rapinoe, who has been hosting weekly Instagram chats with her partner, WNBA star Sue Bird, from their home in Washington state, referenced her rural roots when asking about the timing for lifting the lockdown.

The governor answered, in part, by acknowledging the recent protests of his policies.

“We have to tailor our strategies bottom up as we collaborate regionally across states,” he said. “We also want to collaborate within the state on a regional basis, community by community, so that we can mitigate the spread from one city, one town to the next. And make sure that again, we’re only driven by one thing: public health and people’s safety and not by politics and not by protest.

“As much as I respect — and I really do respect protest and I want people to express themselves — I also want them to be safe. I want them to be healthy. And it’s going to be data that ultimately determines the way we start to pull back.”

Newsom was also asked about a program, announced last week, that will provide financial assistance for undocumented immigrants, who make up 10% of California’s workforce but who were left out of the federal government’s $2-trillion stimulus package.

“We have roughly 2 million people here without documentation. But I’ll tell you what, they’re the backbone of our central services,” he said. “You look at the sectors of our economy we deem essential, primarily the food sector, logistics sector and the warehouse sector — that’s overly represented by these workers.

“And they’re literally saving our lives. They’re feeding us. They’re taking care of us. Not $1 in that federal stimulus to help them and their families.”

Toward the end of the session Newsom’s wife, Jennifer Siebel Newsom, asked Rapinoe about the women’s team’s gender discrimination lawsuit against U.S. Soccer. The players are seeking at least $66 million from their federation, which they accuse of violating both the Equal Pay Act and Title VII of the Civil Rights Act of 1964.

The case, scheduled for May 5 in Los Angeles, has been rescheduled to June 16. It is expected the two sides will reach a settlement before the trial begins.

“I’m very optimistic,” Rapinoe said. “We’ve had discrimination against us and the team over a number of years. But this case has become so much bigger than that. And to tie it to this moment, the interesting part of this moment is people who have traditionally been undervalued because people don’t see them as having as much value, now they’re the essential workers.”

The audience for the Instgram session peaked at just more than 1,900 viewers.