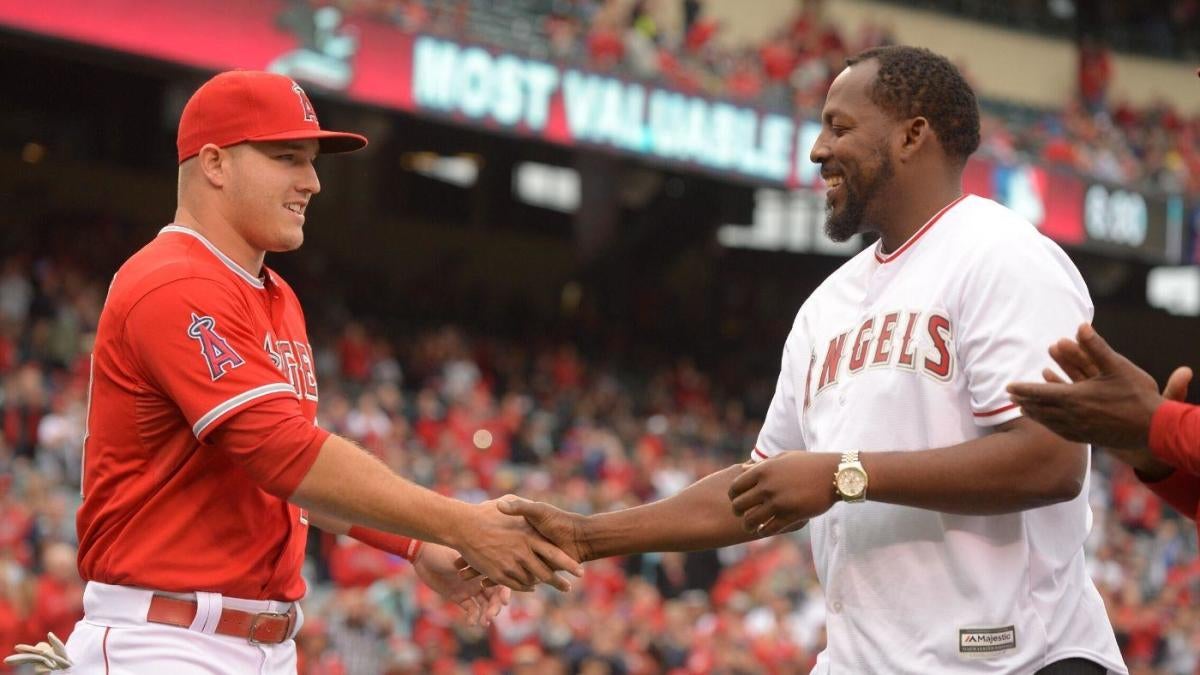 Yowza.
In an effort to avoid going stir crazy with MLB and every other major sports league shut down during the coronavirus pandemic, I’ve decided to take a look at the best of the best for each baseball franchise. We’ve created a 30-day series making an all-time team for each MLB club. We’re breaking down one team each day throughout April, continuing today in Southern California.
Up next are the Los Angeles Angels . To the lineup!

Nolan Ryan came into his own with the Angels, so he’s an easy pick. Also easy is the career leader in WAR, wins and innings — and he’s still tied for fifth in ERA+ despite the huge workload — Chuck Finley.

Andrelton Simmons is one of the best defenders of all-time while David Eckstein was very good for the 2002 World Series champion team. The pick here is obvious, though, in six-time All-Star and franchise icon Jim Fregosi. Only one player in Angels history has more WAR and we know who that is.
Salmon.

As a (hopefully?) fun twist, I’m making a Baseball Stars team for each. That’s right, the old-school Nintendo video game “Baseball Stars,” which I still consider to be the best baseball video game ever. It allowed you to create teams and I used to make all-time lineups for prominent MLB franchises. There are the eight position players with four starting pitchers, one reliever and five bench position players on each Baseball Stars squads.

Garret Anderson spent some time in center, but he was mostly a left fielder (and we needed CF open anyway) and that makes this an incredibly obvious pick. Anderson is the Halos’ career leader in hits, runs, doubles, RBI, total bases, extra-base hits and even sac flies. There was some “compiling” in there, but he was a three-time All-Star and once finished fourth in AL MVP voting. Oh yeah, that was in 2002, when the Angels won their only World Series.

On the bench, man, it’s tough to wade through all those names. I’ll go Darin (Erstad) as I know what a fan favorite he is, plus he’s sixth in WAR and was a centerpiece on the title team. His 2000 season was one for the books, too. Speaking of, I gotta take (Don) Baylor for his MVP. We’ll round it out with Chili (Davis) and Wally (Joyner).

I think it’s because of how quickly he fell apart after his age-31 season, but I feel like it’s easy to forget just how good Jered Weaver was. From 2010-12, he finished fifth, second (to MVP Justin Verlander) and third in AL Cy Young voting, respectively. He’s third in Angels history in WAR, second in wins and third in strikeouts, behind the top two picks.

Also making his second team is Bobby Grich. Check out how he ranks in JAWS at second base! Why was Grich so underrated in his time? It’s pretty easy, actually. He didn’t often carry high batting averages while walking a lot. With the Angels, Grich was a .269 hitter, but he ran a .370 on-base percentage. He also hit for good power, giving him a 124 OPS+ while playing great defense at second. He sits fifth in career WAR in Angels’ position player history. If you don’t want Grich — and you should — you’d be looking at Adam Kennedy or Howie Kendrick. In the case of the latter, Kendrick wouldn’t have been a terrible pick, but I like the perpetually underrated Grich.

Still, while I’d normally lean toward Joyner’s power, he slugged .450 and not .550 in his time with the Angels. Carew hit .313 with a .393 on-base percentage. He makes his second team in this exercise.

Bryan Harvey and K-Rod (Francisco Rodriguez) both had solid runs. K-Rod’s was exceptional and you could argue more dominant, but I’m not taking anyone over Troy Percival. If I wasn’t sticking to the Baseball Stars format, K-Rod as the put-out-the-fires guy before the ninth and Percival as the closer would be lethal.
Now, the Angels have had a lot of great outfielders who were better with other teams but also did well here. There are also some who were better with the Angels but had a shorter run. Fred Lynn, Torii Hunter, Chili Davis, Bobby Bonds, Don Baylor (1979 MVP), Jim Edmonds, Frank Robinson and Reggie Jackson are all on that list. Lots of tough omissions.  Only three other Angels even have *half* as much career WAR as Mike Trout.

Oh no, you see Salmon’s name above and then realize there’s also Vladimir Guerrero out here. We have a DH spot, though. We’ll go Vlad here for the arm.

I was thinking about Bob Boone or Mike Napoli (definitely separate ends of the spectrum on defense/offense there, right). Bengie Molina and Lance Parrish had short stints. Then I noticed something. I first started following baseball at age six in 1984 and I only knew Brian Downing as an outfielder. He actually started his time with the Angels as a full-time catcher, as many of my veteran readers know. Downing sits fourth in career WAR for the Angels and was a very good hitter throughout his time in Anaheim. He makes for a quality pick here. He hit .326 with a 142 OPS+ in 1979 as a full-time catcher.

Playing Prime Albert Pujols here should would be nice, wouldn’t it? They just didn’t get much of that. Darin Erstad is actually the career Angels WAR leader among those who played first base at times. Over the course of his Angels’ career, though, he was actually below average by wRC+ and OPS+. There were short stints from guys like Kendrys Morales, Mo Vaughn and Mark Teixeira (very short). I’ve narrowed the field to Rod Carew and Wally Joyner. The instinct might be to immediately go with Carew, but he didn’t get there until he was 33 and only averaged 119 games per season (the 1981 strike hurt some, but he missed a lot of other time). Joyner has Carew by a slight margin in WAR and outslugged him by 57 points. He was worth a look.
Now, we have one final spot with Frank Tanana, John Lackey, Jarrod Washburn, Dean Chance, Mike Witt, Ervin Santana, Dan Haren and Mark Langston on the board. Lackey and Tanana stand out the most to me when I try to combine upside and longevity. Lackey also started and won Game 7 of the 2002 World Series as a rookie. He’s the pick.