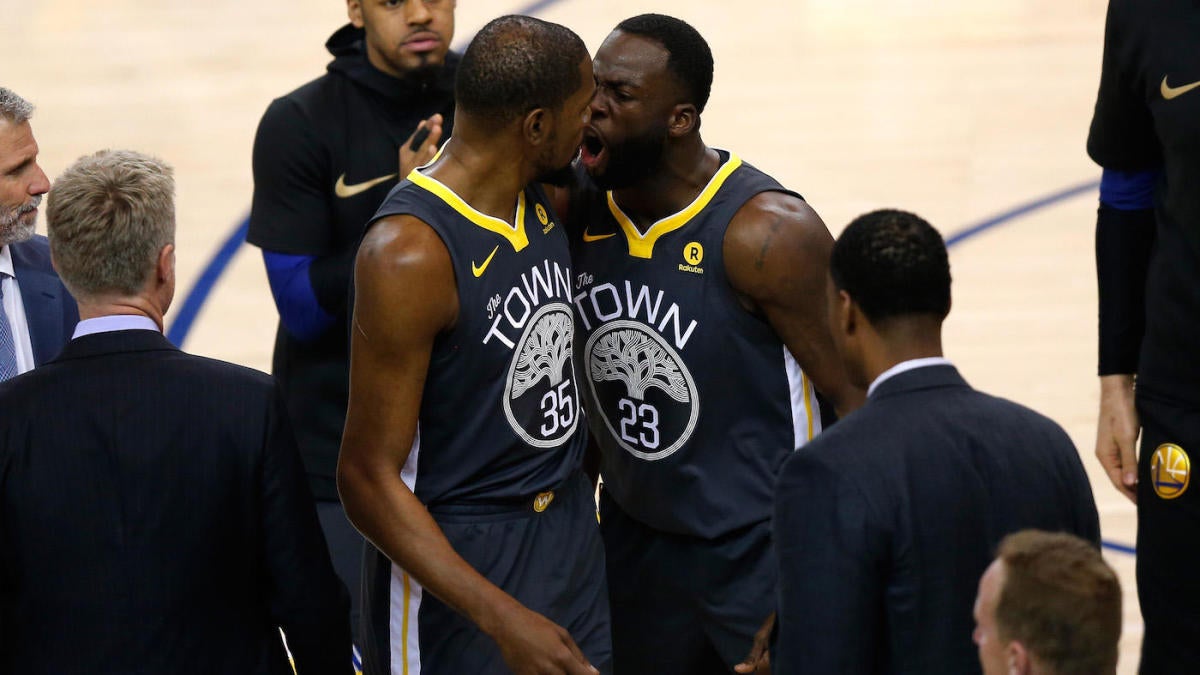 From the moment Kevin Durant announced his decision to leave the Warriors, theories have abounded as to why. He was tired of playing in Stephen Curry’s shadow. He wanted to prove he could build a champion on his own. He fancied playing alongside his good friend, Kyrie Irving, in the New York market.

Draymond Green, for his part, has heard the claims that Durant left the Warriors, at least in part, because of him. Indeed, Durant has since admitted that his public spat with Green in November of 2018 — when Green infamously admonished K.D. in the huddle during a game against the Clippers for the way his impending free agency was hanging over the franchise, calling him a “b—-” multiple times — played a role in his decision.

“A little bit, yeah. For sure,” Durant said while appearing on ESPN’s “First Take” when asked if the altercation played a role in him leaving the Warriors. “When your teammate talks to you that way, you think about it a bit. … Definitely, for sure. I’m not gonna lie about it.”

Green has expressed regret about the incident, but he’s not buying that it, or his overall relationship with Durant, was the reason K.D. left Golden State. In essence, Green is suggesting if Durant really wanted to stay with the Warriors, but just couldn’t stand to play with Green anymore, the Warriors would’ve gladly traded Draymond to accommodate arguably the best player in the world.

“This is f—-ing Kevin Durant we’re talking about,” Green said while appearing on “All The Smoke” with Matt Barnes and Stephen Jackson. “Like, yeah, I’ve done great things here, but let me tell you this: I know [Warriors GM Bob Myers], and if it was such a big deal Kevin being here and me being here [together], if Kevin really wanted to be here, all he would’ve done is went and said to Bob, ‘Yeah I’ll stay, but Draymond’s gotta go.’ And guess what, Bob Myers would’ve called me and said, ‘Draymond I love you, and I won’t trade you to a bad team, but where do you want to go?’

“So, [for K.D.] to try to point the finger and say, ‘oh, I left because of [Draymond], get the f— out of here,” Green continued. “And I still love K.D. His feelings about me might not be the same, but I’ll ride for him for the rest of my life. I got that type of love for that brother. But you didn’t leave because of me. You’re f—ing Kevin Durant. If you wanted to be here, I would’ve been out, if I was the issue. I would’ve been long gone. And I understand that. I understand the business of basketball. I understand how this s— works. If Kevin Durant wants to be somewhere and he don’t want me here? I’m out.”

It’s a fair point Green makes, as certainly if it came down to him and Green, any GM in the league would choose Durant. And that’s no knock on Green, who is a great player potentially headed for the Hall of Fame. Durant is just in a different category. But given how much Durant reportedly worried about what people thought/think of him, particularly in the Bay Area, it’s pretty unthinkable that he would’ve ever felt comfortable enough to ask for Green to be traded.

Durant never would’ve heard the end of that. The backlash of joining an already great team would’ve paled in comparison to what Durant would’ve faced for breaking that team up. There’s a realistic scenario in which Green was at least part of the reason Durant left, but Durant was never going to go so far as to demand Green be traded. It makes sense on paper, but not in the real world of egos and insecurities that were already at play in this drama.

Bottom line, Durant was ready to leave the Warriors for myriad reasons. He won his championships, and he was ready for new challenges and a new chapter. He made the same decision a lot of people would’ve made given world-class talent and the options that come with it. Was Green a part of that equation? You can make that case. Again, Durant said the incident was a factor.

But it wasn’t the only factor, and it certainly wasn’t worth the public relations storm Durant would’ve walked into had he demanded Green be traded. For him to be willing to do that, he would’ve had to want to stay in Golden State and hated Green with equal parts of his heart, and neither of those things has ever appeared to be true.