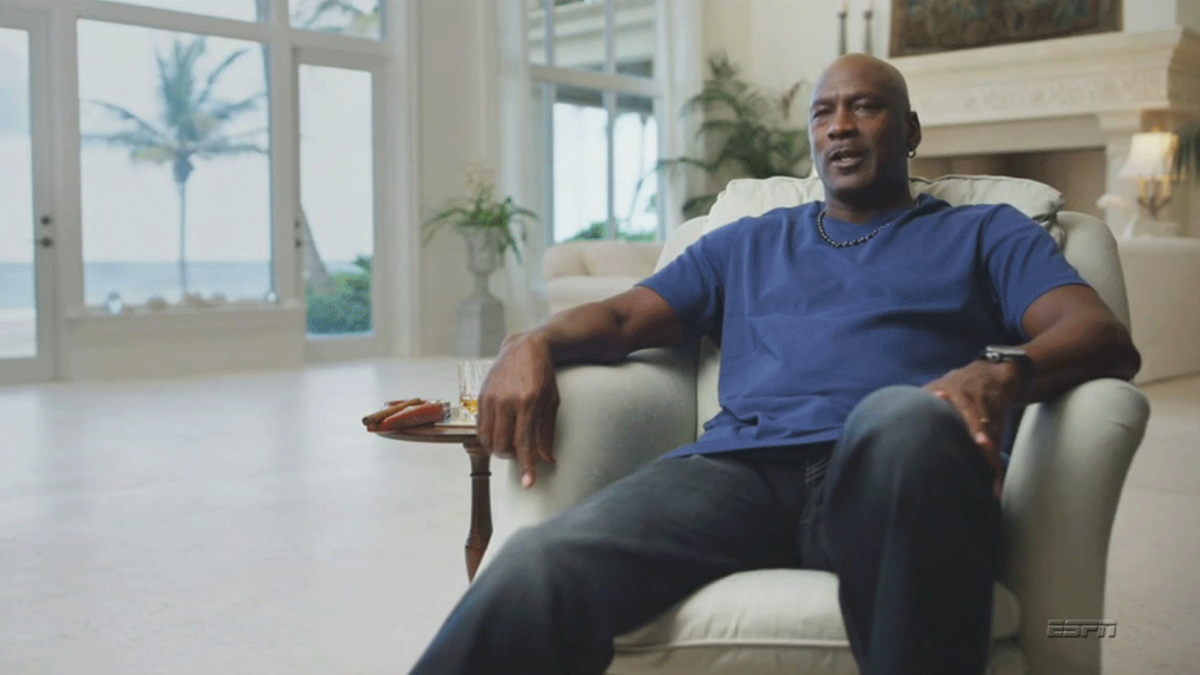 One of the more interesting portions of Sunday’s premiere of The Last Dance, a documentary about the 1997-98 Chicago Bulls, was neither the never-before-seen footage of Michael Jordan cursing at his teammates in practice, nor was it the reminder of Jordan’s basketball supremacy through a montage of highlights shown hundreds of times since they happened. More fascinating than both of those things was the state of Jordan’s drink glass that sat next to the Hall of Famer during his one-on-one interviews.

The glass became one of the most active characters in the first two episodes of the 10-part ESPN docuseries. Every time a shot of Jordan would appear on the screen, it seemed as though the level of beverage was in a different position each time. Director Jason Hehir explained the fluctuation of liquid in the glass on ESPN’s ‘The Dan Le Batard Show with Stugotz,’ calling it a result of splitting some of the Hall of Famer’s replies into two shots.

“Every time you see that glass to the top, it doesn’t mean we went off camera and filled it back to the top or he filled it to the top, cause I had nothing to do with that process. The first part of the answer might be at 6 o’clock, and the second part of the answer, which is still the same subject comes at 7:20 p.m., and that drink has gone down three inches in an hour-and-a-half. It’s a little deceptive, but it’s funny to see people react that way.”

As for the drink of choice, the Bulls legend is a tequila man so that’s what was in his tumbler which might set you back nearly $400 before there’s even anything in it. Also, Lew Bryson, the author of Whiskey Master Class hypothesized to Unnamed Temporary Sports Blog that the NBA icon may have even been promoting his own drink.

“Jordan is a sharp marketing/business guy, so I’d have to guess he’s drinking his tequila,” Bryson told UTSB’s Dan McQuade over email. “And since he can… he’s probably drinking the extra añejo.”

The Cincoro Extra Añejo comes from a tequila brand that Jordan owns along with Los Angeles Lakers, Boston Celtics, and Milwaukee Bucks owners. It’s a category of the liquor that costs up to $1,800 a bottle.

But perhaps the most important question about this is whether his consumption of alcohol did anything to affect how Jordan responded to stuff on camera. There’s no way to know for sure, but UTSB does a decent job pointing out what happens when the glass is at certain points. The laughter that came after he heard about “the Bulls traveling cocaine circus,” and his denial of partying at all in his first year in the league, came when his glass was full. At half-filled, Jordan brings up his opinion that Scottie Pippen should have gotten surgery after the 1997 Finals instead of during the season. At close to empty, he calls Pippen selfish for his contract dispute with management.

In a series about events that already happened, it’s good to see that are actually new characters whose behavior the audience can look forward to.