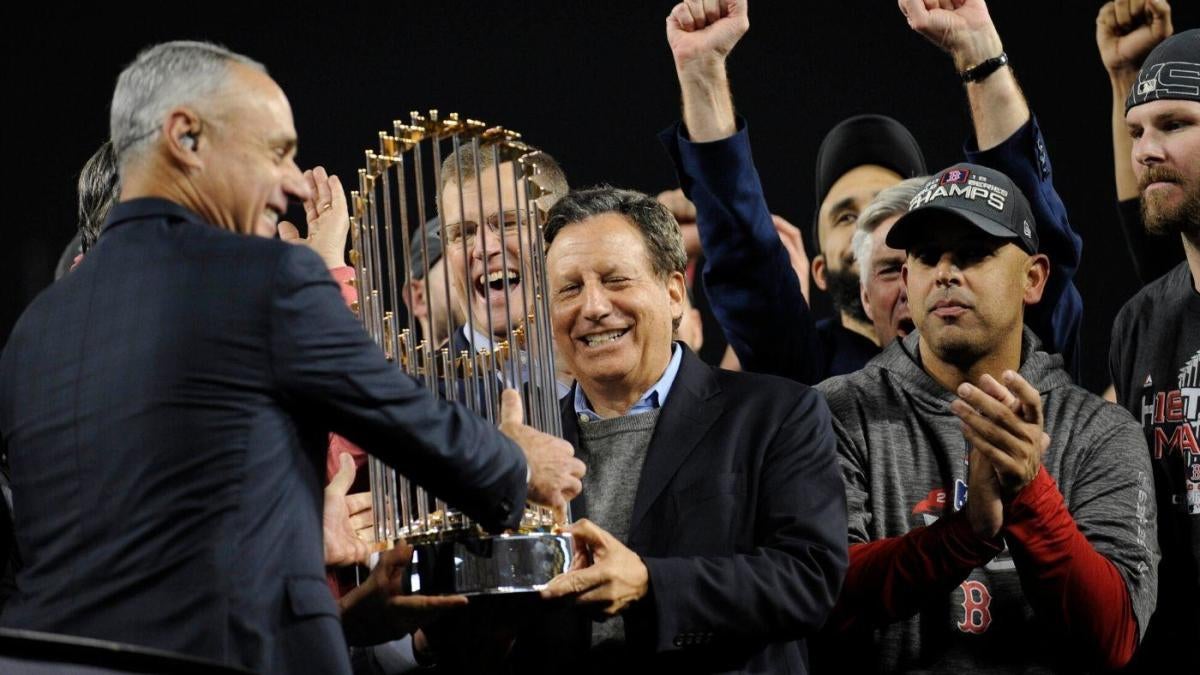 While Astros general manager Jeff Luhnow was handed a one-season suspension before he was consequently fired, no member of the Red Sox front office was suspended. The Red Sox’s top executive during 2018 was Dan Dombrowski and he was fired late last season. It’s possible this weighed in MLB’s decision at least a little bit, however, the league still could have suspended Dombrowski if it wanted to.
The Red Sox’s 2018 (and 2019) manager Alex Cora was suspended for a full season for his role in the sign-stealing scandal with the 2017 Astros, when he was their bench coach. The picture that was painted in that investigation was Cora along with then-player Carlos Beltran were the ringleaders of Houston’s banging scheme. Cora and the Red Sox parted ways in January, the day after MLB’s report on the Astros was issued.

The report says a small number of players said that “on at least some occasions, they suspected or had indications that Watkins may have revised the sign sequence information” from the pre-game reports. “One player described that he observed Watkins write down sign sequence information during the game while he appeared to be watching the game feed in the replay room, circling the correct sign in the sequence after the pitch was thrown.” The Astros were fined million for their scandal, the maximum cash penalty the league can hand down. The Red Sox weren’t even fined a penny. This is consistent with the stance that it was simply Watkins altering reports with in-game video.

From the player perspective, many of them might not have even noticed these changes during the game.  Watkins “vehemently denies” using the replay system during the game to decode signs, the report says.
So, according to the report, Watkins would sometimes find that opposing teams had changed their sign sequences during the game and then update reports that were issued to players. The Red Sox could then relay illegally-obtained pitch information to hitters if they got a runner on second base.
The league and commissioner Rob Manfred released findings of the investigation in a 15-page report. That report, along with eight key takeaways from it, can be found below. In the report, Manfred specifically mentioned the 2017 Astros and made sure to note how much different the effort was in Boston. He said the scheme by the Red Sox in 2018 was “far more limited in scope and impact,” than the operation the 2017 Astros were running. Manfred also made note that while the Astros’ system applied to nearly any pitch, the Red Sox’s system only worked with a runner on second base, which was 19.7 percent of the time league-wide in 2018.
This all leads me to believe Dombrowski wasn’t getting punished even if the Red Sox still had him on board in his same capacity. Manfred seems to have found that the front office knew nothing of this, whereas he did find the Astros’ front office culpable. Note that in the Astros’ report he went out of his way to discuss the poor culture of the organization. That didn’t happen here.
Yes, the players have immunity if they testify in a manner that Major League Baseball finds to be truthful. However, Manfred indicated that he doesn’t believe it even mattered. “Based on the findings of this investigation, this is not a case in which I would have otherwise considered imposing discipline on players.”
As such, it was widely thought that Cora took a similar operation with him to the Red Sox. In the findings here, however, Manfred said that he did not find that Cora “knew or should have known” about the sign-stealing operation.  Manfred found that the in-game video use by Watkins was only used during the 2018 regular season. The commissioner’s office was monitoring things after that.

Major League Baseball released findings Wednesday from its investigation into the 2018 Red Sox for electronic sign-stealing. They were hit a lot less severely than the Astros were for their scheme, and most of the wrongdoing was pinned on one person: video replay room operator J.T. Watkins. The Red Sox also lost one second-round draft pick in the 2020 draft.

5. Only one draft pick was stripped

The report lets it be known that one of Watkins’ jobs was to be an expert at decoding signs via video, which was and still is perfectly legal, so long as it only happens before or after games. It is illegal to do so electronically during games. Watkins was also the Red Sox’s “replay official.” To the layperson, when you see a manager ask the umpire for a second to see if he’d like to challenge a call, we’ll see a coach in the dugout on the phone asking someone if they should challenge. That was Watkins’ in-game role with the Red Sox at the time.

6. No front office member was punished

“Communication of these violations was episodic and isolated to Watkins and a limited number of Red Sox players only,” the report reads.
The Astros lost four draft picks. The Red Sox lost only their 2020 second-round selection. Manfred said the “club must be held accountable, particularly since the club may have benefited from Watkins’ conduct,” which is why the pick was stripped. Again, this is consistent with the stance that it was simply Watkins altering reports with in-game video. MLB is saying, basically, “it wasn’t your fault, but you might have gained an unfair advantage.”
Further, Manfred found that the Red Sox front office, “consistently communicated MLB’s sign stealing rules to non-player staff and made commendable efforts toward instilling a culture of compliance in their organization.”

7. No trash cans were banged

A simple conclusion: Manfred and his investigators seem pretty convinced this was Watkins altering reports on what signs opposing teams used while the Red Sox had a runner on second base during games. Past that, they didn’t find much more.
If you’re a Red Sox fan, here you go. This is where you argue the 2018 World Series title was not tainted. Even if Manfred wanted to break with the agreement and punish players he believed cheated, he says he doesn’t have any reason to believe they did. The report says 34 current and former Red Sox players were interviewed during MLB‘s investigation.

8. Only 2018 regular season was impacted

OK, so we do have some players implicated, but this continues to point the arrow toward Watkins and away from Cora, the front office and most players.
“The evidence uncovered during the investigation is insufficient to conclude that the conduct continued in the 2018 Postseason or 2019 regular season” said the report. “In this regard, it is important to note that, starting with the 2018 Postseason, the Commissioner’s Office placed full-time in-person monitors in replay rooms (“Video Room Monitors”) to prevent the improper use of video equipment.”