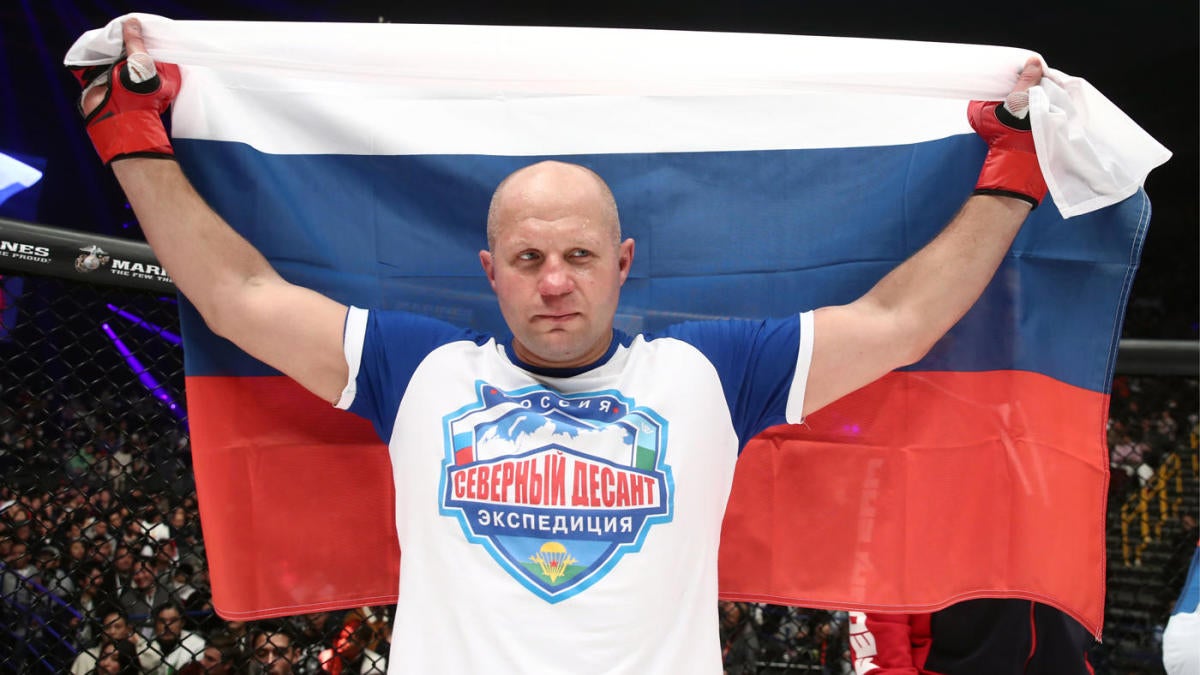 Heavyweights occupy a special place in combat sports. Dating back to the oldest days of boxing, where the status of heavyweight champion bestowed the man with a label akin to “the baddest man on the planet.” While other divisions can routinely be counted on to bring more action and drama to the cage or ring, nothing compares to the visceral reaction evoked when two behemoths stand toe-to-toe.

There have been plenty of superstars in MMA heavyweight history and the CBS Sports experts sat down to debate a deep division full of legitimate candidates for a top 10 spot. There was only one unanimous decision among the votes cast by Brent Brookhouse, Brian Campbell, Jack Crosby and Brandon Wise: Fedor Emelianenko is the best big man to ever ply his trade in MMA.

Let’s take a look at the CBS Sports all-time rankings for MMA heavyweights. And make sure to check out our previous votes for featherweight, lightweight and light heavyweight.

10. Alistair Overeem: Overeem’s decision to jump back to heavyweight after a stint as a dangerous but inconsistent light heavyweight built an incredible mystique. Part living meme, part constant butt of PED jokes, Overeem went on an 11-fight winning streak from November 2007 to February 2013. During that stretch he captured the Strikeforce heavyweight title and eventually made his way to the UFC Octagon where he knocked out Brock Lesnar in the first round of one of the most visually stunning matches in UFC history. He has gone 9-7 since that streak was snapped but remains a constant threat to defeat anyone in the division on any given night. — Brookhouse

9. Frank Mir: Had a motorcycle accident in 2004 not cost him his UFC heavyweight title and two years of his prime, it’s worth considering whether Mir would’ve ended up ranking higher on this list. That doesn’t mean Mir’s legacy is lacking much. Not only did the jiu-jitsu specialist go on to add a second reign as interim champion in 2008, he was a perennial championship contender for a full decade. Wins over Tim Sylvia, Brock Lesnar, Antonio Rodrigo Nogueira (twice), Mirko “Cro Cop” Filipovic and Roy Nelson (twice) support his placement on this list. — Campbell

8. Fabricio Werdum: While Werdum was already a known commodity in the heavyweight division, no one expected him to be the man to snap Fedor Emelianenko’s legendary 27-fight winning streak. Werdum did just that, however, submitting Emelianenko in the Strikeforce cage in June 2010. Similarly, Werdum shocked the world in the UFC Octagon, first knocking out knockout artist Mark Hunt to win the interim heavyweight championship and then unifying the title when he submitted Cain Velasquez one fight later. Werdum also holds wins over Alistair Overeem and Antonio Rodrigo Nogueira, giving him wins over four men who made this very list. — Brookhouse

7. Mirko “Cro Cop” Filipovic: Self-described as “right leg, hospital; left leg, cemetery,” Filipovic’s lethal high kicks could end a fight at any moment. The kickboxing and MMA legend took his talents all over the world, including runs in K-1, RIZIN, Bellator and UFC over a 19-year career. He’ll be best remembered, however, for his work in PRIDE. “Cro Cop” took on all comers during his time in Japan and claimed wins over Kazushi Sakuraba, Igor Vovchanchyn, Josh Barnett (three times), Kevin Randleman, Mark Coleman and Wanderlei Silva.  — Campbell

6. Randy Couture: Couture already made our list of the greatest light heavyweights of all time, but his true home for the majority of his career was at heavyweight. On his first night as a professional mixed martial artist, Couture won a four-man tournament at UFC 13. At UFC 15, he earned a title shot by beating Vitor Belfort. Two months later, Couture won his first heavyweight title, beating Maurice Smith at UFC Japan. He would vacate the title before returning to the UFC nearly three years later to score a TKO over Kevin Randleman at UFC 28 and become heavyweight champion for a second time. That title reign ended a few fights later with a loss to Josh Barnett — a loss with a major asterisk as Barnett tested positive for performance-enhancing drugs. After spending time at light heavyweight, where he would also become champ, Couture made a shocking return to the UFC to dominate Tim Sylvia at UFC 68 and win the heavyweight title for a third time more than a decade after his first title win. — Brookhouse

5. Antonio Rodrigo Nogueira: A jiu-jitsu master with finishing power in both hands and a dangerous offensive game from his back, “Minotauro” was as complete of a heavyweight as MMA has ever seen. That’s not even mentioning his almost inhumane ability to absorb punishment. Nogueira is one of three fighters in MMA history to hold world titles in PRIDE and UFC. “Big Nog” also owns wins over a gluttony of former champions including Dan Henderson, Mark Coleman, Mirko “Cro Cop” Filipovic, Ricco Rodriguez, Fabricio Werdum, Josh Barnett, Tim Sylvia and Randy Couture. — Campbell

4. Daniel Cormier: Cormier has only suffered one defeat as a heavyweight, that loss coming in his most recent fight where the then-40 year-old Cormier was stopped in a dramatic rematch with Stipe Miocic. The loss cost Cormier the heavyweight belt he had won two fights prior by knocking Miocic out. Cormier, who moved down to light heavyweight at the outset of his UFC career, won the Strikeforce heavyweight Grand Prix with wins over Antonio Silva and Josh Barnett. He also holds notable wins over Frank Mir, Derrick Lewis and Roy Nelson. The final bout — should it ever happen — between Cormier and Miocic will determine who is the best heavyweight of their era — and possibly all time. — Brookhouse

3. Cain Velasquez: Velasquez’s career is a prime example of “What if?” in combat sports. Velasquez is, unquestionably, one of the best heavyweights to ever step into a ring or cage, but his career was severely hampered by injuries, forcing him into inconsistent scheduling, long layoffs and a notable decline in his athleticism. Still, Velasquez is a two-time UFC heavyweight champion, beating Brock Lesnar to win his first title and avenging a loss to Junior Dos Santos for his second run with the belt. Velasquez’s resume is shorter than most, but at his healthiest and best, Velasquez was undoubtedly “the man” at heavyweight. — Brookhouse

2. Stipe Miocic: With two defeats in his first eight UFC fights, Miocic looked like anything but a future contender for heavyweight G.O.A.T. status. Yet the blue-collar slugger, who doubles as a firefighter and paramedic in his off time, began a tour de force in 2015 that has cemented his legacy. Miocic has proven he can be hurt, but opponents have found finishing him another story altogether. His last eight fights have produced a 7-1 record, two reigns as heavyweight champion and victories (all but one via knockout) against Mark Hunt, Andrei Arlovski, Fabricio Werdum, Alistair Overeem, Junior dos Santos, Francis Ngannou and Daniel Cormier. That’s what you call a resume. — Campbell

1. Fedor Emelianenko: Although he never did make an appearance inside the Octagon, Emelianenko’s legacy is so strong he never needed to. Why? How about a nine-year unbeaten streak at the peak of his prime as “The  Last Emperor” won 27 fights without a defeat including 14 wins under the PRIDE banner in Japan. Behind his legendary ground-and-pound game and an almost super-human chin, Fedor reached near mythical status. No win was bigger than his 2005 decision over Mirko “Cro Cop” Filipovic for all of the heavyweight marbles. His 20-year career also included victories over Antonio Rodrigo Nogueira (twice), Mark Coleman (twice), Kevin Randleman, Mark Hunt, Tim Sylvia, Andrei Arlovski and Frank Mir. — Campbell