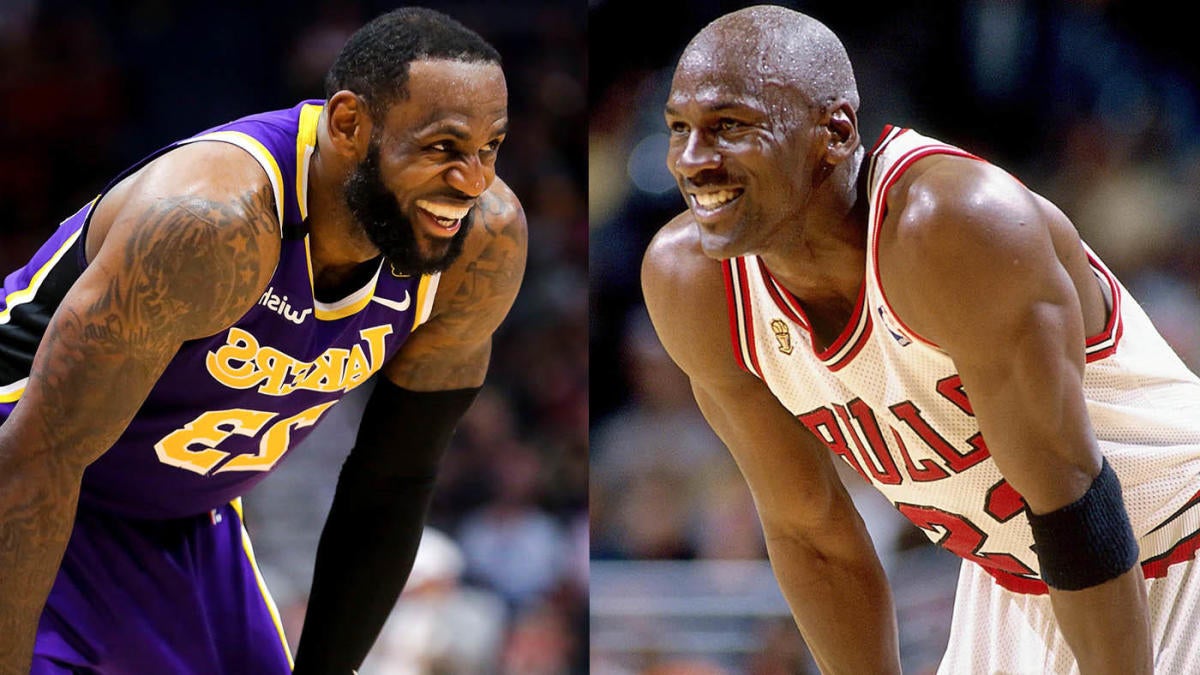 Michael Jordan inspired countless copycats throughout his 15-year reign atop the NBA, but the true heir to His Airness was rarely one of them. LeBron James entered an NBA in 2003 that was rife with Jordan knockoffs, but rather than imitate the legend that gave him his jersey number, the league’s new king charted a course entirely his own. While former “next Jordan” claimants like Kobe Bryant honed turnaround jumpers, James became a true original, a point guard in a power forward’s body that treated courts as his own personal chessboard.

That dichotomy only enhances what is already the most fascinating “greatest of all time” argument in all of sports. Jordan vs. LeBron is the NBA’s ultimate Rorschach test, a glimpse into what a respondent values in a basketball player: Jordan’s precision scoring, or James’ all-around brilliance?

That test is not just limited to the talking heads engaging in that discourse, but the two players at the center of it. What they each valued in a basketball player was evident through the playing styles they themselves chose, because at various points on their journeys, each proved they were more than capable of replicating the other.

With the debate set for reignition following ESPN’s upcoming Jordan documentary, The Last Dance, its terms need to be reestablished. Neither James nor Jordan were incapable of playing the style that the other mastered. In fact, both were tempted by the other’s approach on their way to immortality. For Jordan, that temptation came before his first ring. For James, it preceded his most important one.

1989: The desperate Bulls move Jordan to point guard and watch him set records

The name “Sam Vincent” likely doesn’t ring many bells even among the NBA’s most devout fans. A seven-year journeyman who averaged just shy of eight points per game, Vincent’s greatest contribution to the sport was a slump he suffered in the spring of 1989. In March, Chicago lost three straight games to fellow Eastern Conference playoff teams with Vincent shooting below 35 percent from the field and the Bulls averaging under 96 points.

Frustrated by the team’s struggling offense and its rapidly declining place in the standings, Jordan met with coach Doug Collins to brainstorm possible solutions. When the Bulls next took the floor, Vincent and Jordan swapped positions. Vincent was relegated to off-ball duty; Jordan took over as Chicago’s starting point guard.

The results were astonishing. Jordan, whose career mark of 6.2 assists per game was hardly remarkable, averaged 10.7 for the rest of the season. He earned 12 triple-doubles between March 11 and April 23, and at one point posted 10 in an 11-game span. When the Bulls needed Jordan to pass, he passed.

He did so in a league very different than the one James currently occupies. In an April game against the Indiana Pacers, Jordan finished with 13 assists despite his Bulls not making a single 3-pointer. Many of the passes he made would be mostly unrecognizable in the modern NBA, but a few LeBron staples became favorites of Jordan’s when he reoriented his game around his teammates. The transition bounce pass through scrambling defenders is timeless.

Jordan never sacrificed his own numbers in the name of accommodating those teammates. He averaged 30.4 points per game as a point guard, a total James never matched over a full season. For a brief stretch in 1989, Jordan essentially managed to pick up the duties of an All-Star point guard while maintaining his workload as an All-Star shooting guard. That stretch may not have a peer in NBA history.

Why it didn’t last, nobody can say for certain. Perhaps Jordan knew it was unsustainable. Perhaps Phil Jackson’s promotion to head coach rendered the position change meaningless; the triangle offense doesn’t make use of a point guard, but rather emphasizes team-wide ball movement over a single distributor. But Jordan’s reputation to that point in his career was as the NBA’s greatest solo act. He drew widespread criticism for his supposed inability to lift his teammates. By the end of the 1988-89 season, such notions were emphatically rebuffed.

2015: James nearly carries a team of misfit toys to a championship

When Jackson took over the Bulls before the 1989-90 season, his message to Jordan was, in essence, that he didn’t want him to win the scoring title. Winning meant empowering his teammates, a trait James has always had in spades. Forget about the league scoring title — James isn’t even leading his own Los Angeles Lakers team in scoring this season. He has willingly adjusted for the sake of Anthony Davis, just as he has for several other All-Star teammates.

In 2015, those teammates were Kevin Love and Kyrie Irving. But Love dislocated his shoulder in the first round of the playoffs, while Irving fractured his kneecap in Game 1 of the NBA Finals. LeBron wasn’t going to put his lifelong quest to win a championship for the Cleveland Cavaliers on hold just because his handpicked running mates were down for the count. So he took a page out of the Jordan playbook and shot more than he ever had before.

All things considered, James’ career average of 19.6 field goal attempts per game is fairly modest for a player of his standing. It would rank 11th on this season’s leaderboard. But in the 2015 NBA Finals, LeBron averaged 32.7 attempts per game. Not points. Attempts. If you include free throws, James shot the ball 263 times in six games.

If that sounds greedy to you, well, I’d like to know what alternative you’d pose. Few Finals teams ever need to start Matthew Dellavedova. The Cavaliers simply had no other option. They were facing a 67-win Warriors juggernaut without their second- and third-best players. Their only chance was to slow the game down to a crawl and hope LeBron could bully the Warriors to a championship. It almost worked. Cleveland won two games in that series and took a third to overtime. In the process, James scored almost 40 percent of his team’s total points.

While his usual diet of pick-and-rolls, isolations and transition opportunities accounted for plenty of those points, Golden State’s smaller defenders allowed for a fair bit of post-up play. From time to time, he even busted out a Jordan classic: that famous turnaround jumper.

As badly as James’ Cavaliers needed points, he didn’t forgo his usual table-setting duties. James accounted for over 55 percent of Cleveland’s total assists in the series in averaging almost nine per game. For six games in 2015, LeBron essentially doubled his scoring responsibilities without sacrificing his role as Cleveland’s only meaningful passer. Like Jordan, he functionally played two positions at once.

Cleveland lost this series to Golden State despite James’ heroics. He thankfully never needed to revert to them, as Irving and Love’s presence in the 2016 rematch was enough to swing the championship to Cleveland. But in his first lengthy playoff run in 2007, LeBron was roundly criticized for passing up a game-winner at the end of Game 1 of the Eastern Conference finals. Allowing Donyell Marshall to take that shot supposedly indicated that he lacked the killer instinct that made Jordan a six-time champion. But on the game’s biggest stage, James was so dominant playing Jordan’s way that he came only two votes short of winning Finals MVP despite losing the series. Suffice it to say such critiques have long been debunked.

So what does all of this mean for the debate?

The process of actually picking a winner between the two greatest basketball players of all time is ultimately going to be based on individual preference. Some simply prefer Jordan; others, LeBron. Little can actually be done to sway aligned voters, and the stretches presented above create yet another stalemate between the two. Jordan and LeBron did fundamentally different things on the court. Both proved that they were at least capable of matching the other.

The arguments used in the process of landing on a winner, though, deserve a bit of an update, or at least renewed terms. It hardly seems fair, for example, to suggest that Jordan couldn’t pass as well as James has. The more accurate reading of their careers based on what Jordan managed to accomplish in 1989 is that he chose not to do so in favor of emphasizing other areas of his game. LeBron did the same, but in reverse. It’s not as if it could be said that either was wrong in making the decision that they made, but in naming the greatest player of all time, we are indirectly arguing that one was right.

Parsing the meaning of that choice in itself creates a debate that is perhaps just as interesting. In the battle for basketball’s soul, Jordan and LeBron represent opposing extremes. In his 2013 book, Eleven Rings, Jackson explained that in the process of teaching Jordan the triangle offense as a means of including other players in Chicago’s offense, Bulls assistant coach Tex Winter would constantly tell Jordan that there is no “i” in “team.” Jordan, in turn, would reply that there is an “i” in “win.”

That kind of willful defiance represents the debate’s endgame. It reframes the process around two correct but opposing answers. James dutifully fulfills his role within a team while Jordan intentionally spells a different word in order to achieve the same desired result. In dabbling with the other’s approach to basketball, both made it clear that that’s exactly the way they like it.