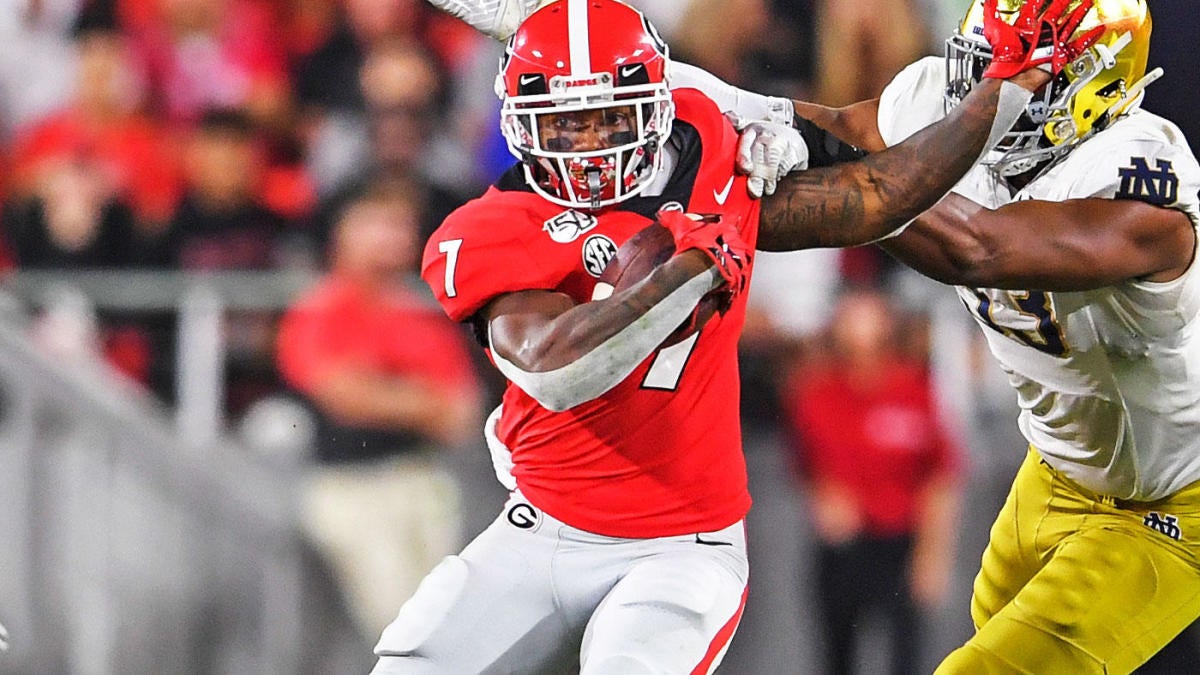 The headlines surrounding the Texans‘ 2020 offseason have been dominated by the team’s trades involving DeAndre Hopkins and Brandin Cooks. Although there’s no sugarcoating the magnitude of losing Hopkins, the Texans, by virtue of the draft, have the chance to put together a roster that is at least comparable to the one that made it to the second round of the playoffs in January.

Here’s a look at how the Texans can put together a perfect 2020 NFL Draft.

Although he doesn’t play receiver, the addition of Georgia running back D’Andre Swift would add a considerable boost to a Houston offense that would certainly welcome another playmaker after losing Hopkins. Swift, the top-ranked running back prospect in the draft, is also arguably the draft’s most versatile back, as he made plays as a runner as well as a receiver during his time with the Bulldogs. Swift also showed the ability to get the tough yards between the tackles as well as the ability to make plays outside the hash marks.

The idea to draft Swift with the 40th overall pick was initially hatched by CBS Sports’ R.J. White in White’s seven-round mock draft. It’s his belief that it would be hard for coach Bill O’Brien, someone who values the running back position, to pass on Swift if he is still on the board when the Texans are on the clock. That would give the Texans one of the NFL‘s best trios at the running back position in Swift, former All-Pro David Johnson and backup Duke Johnson.

Houston to grab the best available edge rusher and receiver with the 90th and 111th overall picks. Ideally, either/or Utah’s Bradlee Anae or Notre Dame’s Khalid Kareem will be available with the 90th pick. Anae, a consensus All-American last season, recorded 13 sacks and 14 tackles for loss during his final season with the Utes. One of the Irish team captains last season, Kareem recorded 46 tackles, 10 tackles for loss, 5.5 sacks, and three forced fumbles during his final season in South Bend.

The Texans have countered the loss of Hopkins by adding depth to their receiving corps with veterans that include Cooks, Kenny Stills and Randall Cobb. That being said, Houston should bring in a young receiver that can eventually blossom into a starter. Two possible options with their 111th pick include South Carolina’s Bryan Edwards and Ohio State’s K.J. Hill. The 6-foot-3, 215-pound Edwards was extremely consistent at South Carolina, averaging about 59 catches for 761 yards and nearly six touchdowns per season during his four seasons with the Gamecocks. Hill, a slot receiver, caught 127 passes and 16 touchdowns during his final two seasons in Columbus.

The Texans have five Day 3 picks and should spend at least two of these picks adding depth to their offensive and defensive lines. A good fit at nose tackle (a position the Texans need to fill after losing D.J. Reader in free agency) with the 171st pick is Michigan State’s Raequan Williams, a two-time First Team All-Big Ten selection who started 42 consecutive games for the Spartans.

Keith Ismael, a versatile lineman out of San Diego State, would be a good fit for the Texans with the 250th overall pick. During his time with the Aztecs, the 6-foot-3, 310-pound Ismael played both guard positions while starting 13 games at center in 2019. A two-time First-Team All-Mountain West performer, Ismael played in all but two of the Aztec’s 956 offensive plays last season.

4. Bulk up the secondary

Houston should grab a safety and cornerback with two of their three seventh-round picks. Ideally, the Texans would be able to use the 240th pick on Baylor cornerback Grayland Arnold, who picked off six passes during his final season with the Bears. A great fit with the 248th pick would be Alabama safety Shyheim Carter, who recently received praise from Crimson Tide coach Nick Saban.

“Shy’s actually played every position for us,” Saban recently told Aaron Suttles of The Athletic. “I think Shyheim Carter would fit in probably one of the top two or three players on the team from a knowledge standpoint. He can answer every question in a meeting about every position. He would be a great, great coach. I think that’s what creates a lot of diversity for him as a player, to be able to play multiple positions, because he’s very smart and it means something to him.

“He’s spent a lot of time trying to learn this stuff,” Saban continued. “He prepares well for the games. I can’t say that one position is more natural for him than the other because he’s always done a pretty good job wherever we’ve decided to put him in.”