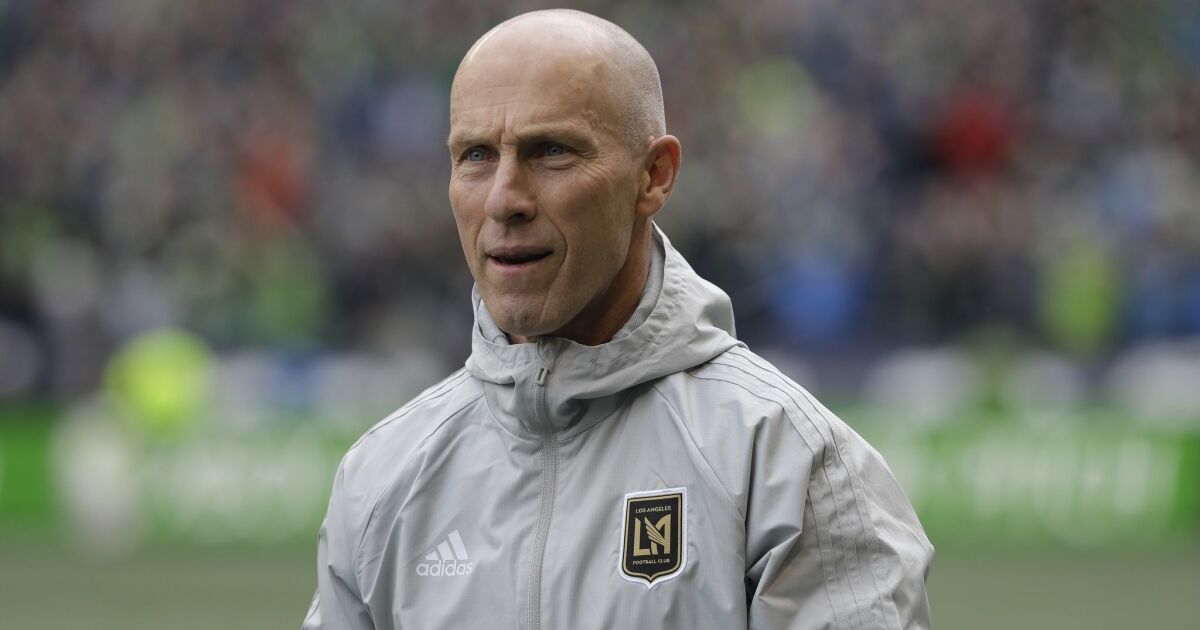 Having coached two national teams and more than a half-dozen club teams on three continents, Bob Bradley has made a comfortable living inspiring men with his words. Which begs the question: To whom does Bradley turn when he needs inspiration?

“It’s not that it’s Springsteen every day,” said the LAFC coach, who can recite from memory long passages of songs by Bruce Springsteen, a fellow favorite son of New Jersey, born in Montclair and educated at Princeton.

But it is Springsteen on most days, as it was Tuesday when Bradley quoted The Boss’ 2012 hit Jack of All Trades.

“There’s a part of the song where it says, ‘Hurricane blows, brings a hard rain/When the blue sky breaks, feels like the world’s gonna change,’” Bradley said. “How fitting that [is] for the situation we’re all in.”

The situation Bradley and the rest of MLS find themselves in is far more hard rain than blue sky. Last month. the league suspended its season for eight weeks because of the COVID-19 outbreak and on Tuesday it extended that indefinitely, issuing a statement that said it doesn’t know when games will resume.

“Although we hoped to return to play in mid-May, that is extremely unlikely based on the guidance of federal and local public health authorities,” the statement read.

The MLS had been targeting a May 10 return, with Commissioner Don Garber saying he hoped to complete a full 34-game season. Garber backed off that in an interview with ESPN’s Taylor Twellman on Monday, saying the league would have to explore a number of scenarios from tournament formats and neutral locations to an abridged regular season featuring games played with no fans in attendance.

For Bradley, whose team has sold out all 39 MLS games it has played at home, that last option was almost as painful as not playing at all. Yet, it’s one he may have no choice but to accept.

“Games without fans, they’re sad in a way,” Bradley said in a video-conference call. “We’re also in unprecedented times and so I know that the kind of discussions that lead toward restarting without fans, that’s still a way to reconnect. It will be a challenge for sure.

“You’ve got to find ways in tough times to adapt. It’s not what any player in the world would want. A game without fans has no soul. But this is different.”

And for the coach, eerily the same as well.

Bradley managed the Egyptian national team during a time of domestic turmoil that forced it to play a World Cup qualifier in an empty 86,000-seat stadium in 2012.

“I remember when we trained in the stadium the night before the game,” he said. “We gathered everybody before we started training and we said, ‘Try to look into the stands and imagine that there’s 90-million Egyptians here. Because if they had the chance, all of them would be here with us.’”

Still, as Springsteen once sang, “it’s gonna be a long walk home” before LAFC will be in position to play in a stadium, full or empty. The team hasn’t been together since March 12, when its CONCACAF Champions League game with Cruz Azul was canceled. Since then, players have been told to stay home and train on their own, waiting for MLS to lift a moratorium on team practices that was recently extended for a fourth time through April 27.

It will undoubtedly be extended again.

“We’ve never really focused on when we’re returning. We focus on each day and making sure everybody’s finding the right ways, physically and mentally, to stay with it,” Bradley said. “I certainly understand that every time the date gets moved back, it’s a little bit more of a challenge. Even some of the most conscientious players, in certain moments, start to lose a little bit.

“We know that eventually we’ll be back together and the game will continue. But making sure that in the moment we all realize how important the job is to stay home and do everything to get past the virus, that’s first.”

When training does resume, MLS teams likely will need several weeks to prepare for the resumption of games which, under even the most optimistic timeline, won’t happen until late June.

In the meantime, Bradley can do little more than rally his troops through phone calls and group chats while “waitin’ on a sunny day.” That’s a Springsteen song too, one that, as Bradley surely knows, contains the lyrics “everything’ll be okay. … Don’t worry, we’re gonna find a way.”