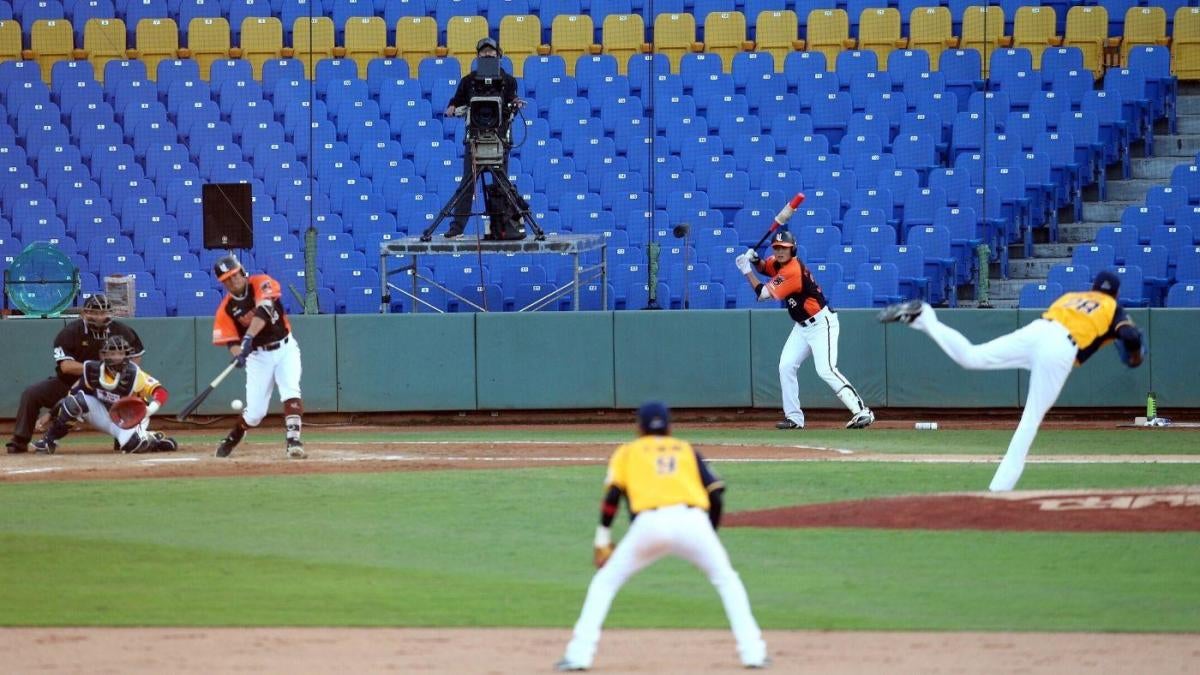 Beautiful. Kai-Wen Cheng, an outfielder with the Uni-Lions, hit the first home run of the CPBL season in the first inning. That means, by extension, Cheng hit the world’s first meaningful home run of the year. Take a look:Although Saturday’s scheduled opener didn’t get played and there were no fans allowed at the stadium, there was some form of intelligence present in the seats. That’s because the Rakuten Monkeys had robot fans at the game (we previously covered this development here), including some that beat drums to provide a more lively atmosphere:

Miranda, now 31, spent parts of three seasons in the majors with the Seattle Mariners and Baltimore Orioles. For his big-league career, he appeared 44 times and posted a 4.72 ERA and 2.19 strikeout-to-walk ratio. He had spent the past two years pitching in Japan.A little unnerving? Maybe, but we credit CPBL for the creativity, and for inspiring a lot of individuals to feel envy toward a robot for the first time in their lives. (Okay, so maybe that’s more than a little unnerving.)Chan’s long ball was also off a pitcher with big-league ties. That left-hander is Ryan Feierabend, the knuckleballer who has pitched in the majors with the Mariners, Texas Rangers, and Toronto Blue Jays. Alas, Feierabend was never able to find success in the Show — not even to Miranda’s modest levels. In 33 career outings, he had a 7.34 ERA.

2. Brothers rally with their own homer

In the end, the Uni-Lions were victorious by a 4-1 margin in 11 innings. In a knowing wink from the universe, this was a long, long contest, running more than 4 1/2 hours.Even with the delay, and with an empty stadium serving as the host, the game between the Chinatrust Brothers and the Uni-President 7-Eleven Lions was a welcomed sight for baseball fans everywhere.

The Brothers and Uni-Lions remained in a 1-1 game into the sixth inning, meaning every baserunner was significant in their own way.Unfortunately, Brothers first baseman Wei-Ta Su didn’t get the memo. He got caught a little too far off first base by Uni-Lions catcher Chen Chung-Yu. Behold, with a pretty backpick: The first professional regular season baseball game of 2020 took place Sunday. The Chinese Professional Baseball League (CPBL), which is based in Taiwan, kicked off its campaign nearly a month after the league was supposed to begin play. Due to the coronavirus, the CPBL moved its Opening Day from March 14 to April 11. Saturday’s scheduled opener was then postponed due to rain, but we got some meaningful baseball on Sunday.

Cheng’s home run gave the Uni-Lions an early 1-0 lead, but it didn’t stay that way for long. The Brothers tied the game in the fourth when Tzu-Hsien Chan provided his own solo home run:To celebrate the occasion, let us dive into five highlights worth watching.

You can insert your own joke here about how it would’ve been a brief Yankees-Red Sox game. You can also check out CPBL Stats for more info about the league, and you can register for an account to watch the games by clicking here.In a fun coincidence, the pitcher who served up Cheng’s dinger was none other than Ariel Miranda.