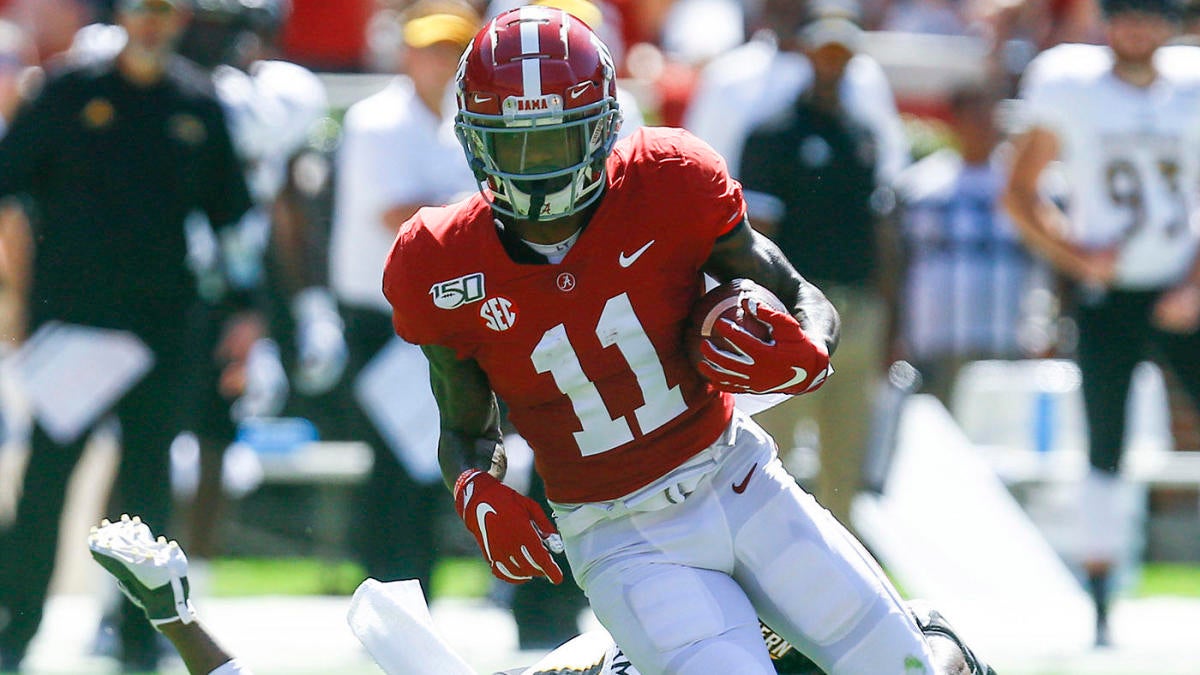 Since the dawn of time, when measuring the speed of NFL draft prospects, all we’ve had is the 40-yard dash. That’s it. Yet, every year, a handful of prospects are labeled as faster on the field than their time at the combine and vice versa.

We have on-field player tracking data in the NFL via Next Gen Stats derived from wearable technology on players’ uniforms, but nothing with college players.

In this article, I’m utilizing new, state-of-the-art technology from a company called Slants. It uses AI and computer vision algorithms to identify players on film and develop player tracking data that doesn’t exist through wearable technology or camera systems.

Tying in this year’s draft class, there’s no better group to run through Slants’ algorithm than the wide receivers.

While we don’t know precisely how miles per hour equates to a 40-yard dash time, I wanted to pinpoint 10 receivers who, after film sessions, looked either slower or faster than their 40 times. Solely based on how they compare to the other pass catchers in this study, the “true” speed for each prospect has been categorized as one of the following:

Checks out: Self-explanatory. Based on mph rank and 40-yard dash rank being equal, the speed for a prospect with this distinction checks out.

Game speed > timed speed: Based on mph rank being better than rank in the 40-yard dash, it’s fair to say a prospect in this category is probably faster on the field than he was in Indianapolis.

Timed speed > game speed: Based on mph rank being slower than rank in the 40-yard dash, we can assume a prospect with this label is slower on the field than he was at the combine.

(Important note: All mph figures below were measured from plays on which the receiver had the ball in his hands at some point. While that may not represent the fastest the prospect has ever run on a football field, it’s the most practical. A 22 mph clearing route is not as valuable as reaching 22 mph on a catch and run, and Next Gen Stats provide backing here, as their ultimate speed stat shows “fastest ball-carrier,” not fastest overall speed.)

For speed perspective, let’s start with the undisputed fastest prospect in this class, Henry Ruggs from Alabama.

Checks out: Of the members of this study, Ruggs clocked the fastest time on the field and at the combine, essentially guaranteeing he’s the fastest receiver in this class. For perspective on a speed of 21.94 mph for Ruggs, it’d place as the sixth-fastest speed recorded in the NFL last season, per Next Gen Stats.

With Ruggs, you’re getting elite-level speed. No question about it.

Game speed > timed speed:  The first speed discrepancy comes with the Reagor, the prospect with the second-fastest mph on the field of anyone in this study.

Being a tick more than a full mph slower than Ruggs is substantial, but we now can safely assume Reagor plays faster than the 4.47 time he clocked in the 40-yard dash at the combine. And he’s certainly not the fifth-fastest wideout in this group on the field, as his 40-yard dash time would indicate.

Checks out: After being put through Slants’ algorithm that calculates on-field speed, Mims’ 40-yard dash time gets big validation.

Whether it be after the catch or simply running a go route down the field, Mims has seriously threatening, game-breaking speed. It’ll be surprising if the former Baylor product is available on the second day of the draft after his acing of the pre-draft process.

While running 19.95 mph may very well perfectly equate to a 4.47 time in the 40, he did not look like a sub 4.50 player on film. However, now we know Reed is inside the top half of speed among receivers in this study.

Game speed > timed speed: An eighth-place finish in the 40 among the 10 receivers in this study is rather disappointing for Aiyuk, especially given his reputation as a field-stretching speedster before and after the catch.

But the fifth-fastest on-field mph aligns more with what the film shows in terms of his overall explosiveness and top gear.

Game speed > timed speed:  Peoples-Jones’ historic broad and vertical jumps — both in the 99th percentile among receivers over the past 21 years at the combine — indicate he’s incredibly explosive. But I wasn’t quite sure how fast the former Michigan receiver was based on film, although I was a bit surprised by 4.48.

Game speed > timed speed: Higgins was vital to include in this study because we didn’t get an official time from him at the combine. His “unofficial” official time at the Clemson Pro Day right before the COVID-19 outbreak was 4.54, and given the stigma surrounding pro day 40-times, it wouldn’t be crazy to assume Higgins has closer to 4.60 speed than 4.50 speed.

Finishing seventh in mph, better than ninth in 40-yard dash time, isn’t major, but measuring only three hundredths of a mph slower than DPJ, who ran 4.48 at the combine suggests Higgins, in fact, might be closer to being a 4.50 guy after all.

Timed speed > game speed: Claypool was probably the biggest surprise at the combine, running 4.42 at 6-foot-4 and 238 pounds. No one saw that time coming. He just didn’t look like a low 4.40 wideout on film. This study argues that Claypool simply isn’t as fast on the field as his 40-yard dash would suggest.

Timed speed > game speed: Probably the second-most surprising 40-yard dash time among receivers at the combine came from Jefferson. While differently sized than Claypool at 6-1 and 202 pounds, the LSU star didn’t appear to be a sub 4.45 guy on film.

With game speed slower than Claypool, who ran 4.42, and a figure a full mph slower than Peoples-Jones, who clocked 4.48, suggests Jefferson was faster on the track in Indianapolis than he is on the football field.

Checks out: By no means did Cephus look like a burner on film, but 4.73? Didn’t look that slow. Heck, that time placed him in the second percentile among receivers at the combine over the past 21 years. He came in 10th out of 10 in both categories, so we can consider him the slowest wideout in this study, but his 18.38 mph suggests he’s probably not 4.73 slow, unless we are to believe Jefferson and Claypool — others within a half mph of Cephus are, say, high 4.6 runners.