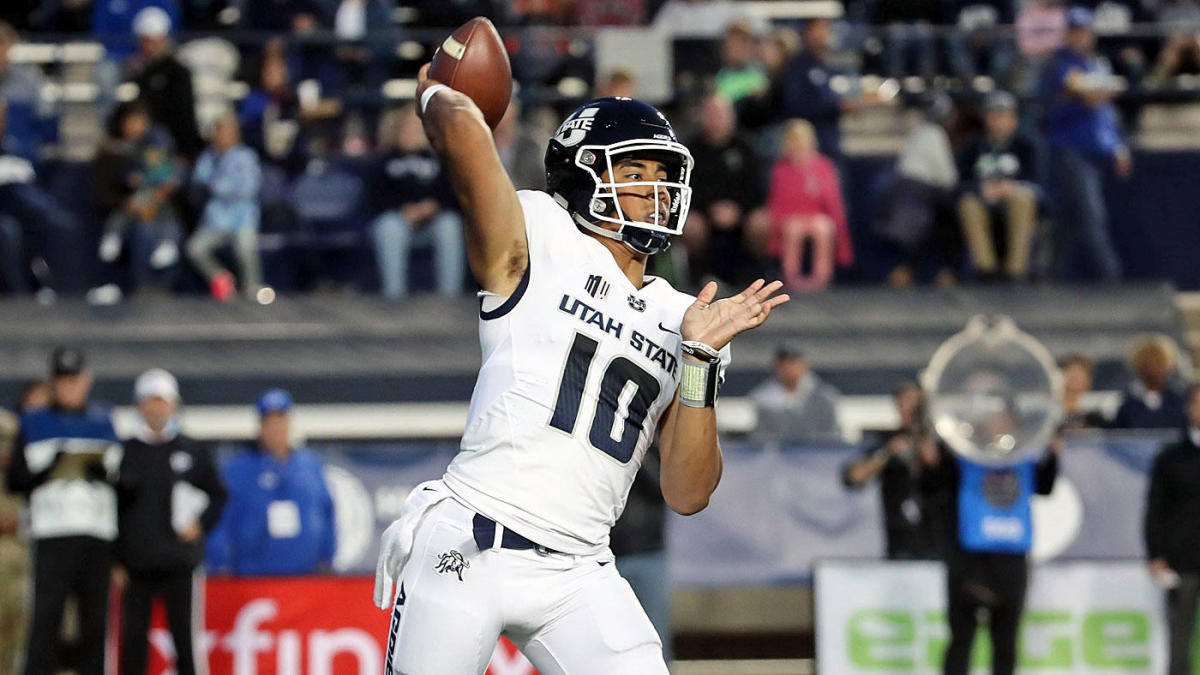 While most of the attention and dialogue concerning the quarterbacks in the 2020 NFL Draft has revolved around Joe Burrow (a virtual lock to go No. 1 to the Bengals) and Tua Tagovailoa (who has serious injury concerns), the draft’s most polarizing quarterback is Jordan Love — a quarterback with all the physical tools to succeed at the next level, but also mostly underwhelming tape from his final season at Utah State.

So, it should come as no real surprise to learn that several teams are doing extensive research on Love as the draft nears.

Texas Tech coach Matt Wells told ESPN that seven NFL head coaches have called him in the past five days to talk about Love. Before landing at Texas Tech, Wells coached Love at Utah State from 2017-18. It was in 2018 that Love pieced together the best season of his career, throwing for 32 touchdowns and only six interceptions, which vaulted him into the first-round discussion before he disappointed this past season with 20 touchdowns and 17 picks. Despite that poor final season, Love is still in the first-round mix.

“I think they are just trying to put the complete story together on him,” Wells told ESPN.

Wells didn’t say which seven coaches called him, but ESPN’s Jeremy Fowler provided a partial list of the teams looking into Love. According to Fowler, the Dolphins, Saints, Patriots, Chargers, Packers, and Redskins are all doing their due diligence — among “several” other teams that weren’t named.

Most of those teams aren’t at all surprising. The Dolphins have been connected to Tua for a while now, but if they take the best player available at No. 5, they could try to target Love later with one of their two remaining first-round picks. The Saints need to identify Drew Brees’ successor, which puts Love in play at No. 24. But that would require the Patriots, who have yet to replace Tom Brady, to pass on Love at No. 23. It’s difficult to imagine the Redskins at No. 2 or the Chargers at No. 6 taking Love that early in the first round, but both teams are still trying to find their franchise quarterbacks, so they can’t really afford to not look into Love. Plus, if either team traded back, they could be interested in Love in the middle to late portion of the first round.

That brings us to the most interesting team on that list: the Packers. At No. 30, Love to Green Bay would actually make a ton of sense.

Aaron Rodgers is 36. He hasn’t been “Aaron Rodgers: Quarterback God” for the past few seasons now. This past year, even though the Packers went 13-3, they didn’t get to 13 wins and the NFC title game with stellar quarterback play. Rodgers wasn’t bad, but he also wasn’t great. He finished 13th in DVOA, which measures value per play, and 20th in total QBR. That doesn’t mean the Packers should be trying to replace Rodgers immediately. But it’s not too early for them to begin thinking about life after Rodgers. This is the same team that drafted Rodgers when they had Brett Favre — a move that allowed them to transition from one Hall-of-Fame quarterback to the next. With Rodgers nearing the end of his career and already seemingly past his prime, the Packers are suddenly staring at a not-so-distant future without a Hall-of-Fame quarterback — a reality they haven’t been forced to confront in nearly 30 years.

It remains to be seen if Love can turn his physical tools into a successful product in the NFL. But those physical tools will likely entice one team — perhaps one of the aforementioned teams — to take a chance on him in the first round with the hope that he becomes more like Patrick Mahomes than, say, Blake Bortles.