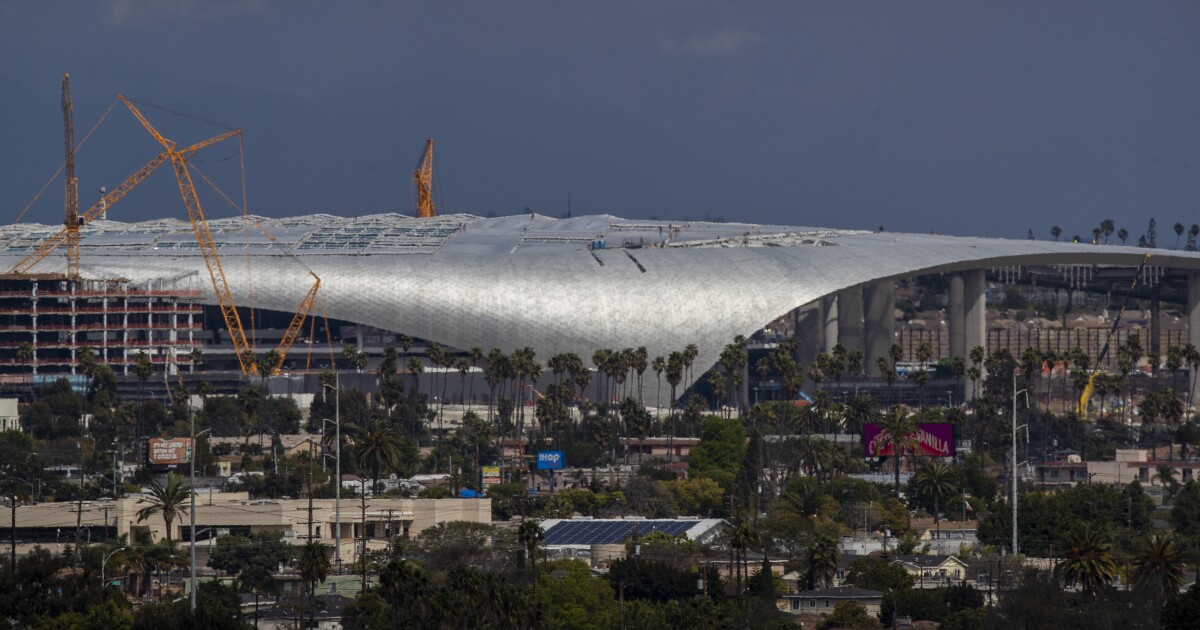 The International Champions Cup soccer tournament, which has brought European superclubs such as Real Madrid, Barcelona, Manchester United and Bayern Munich to the U.S. each summer, will not be played this year because of the COVID-19 pandemic.

The cancellation of the tournament, announced Friday afternoon, takes with it what was expected to be one of the first events at SoFi Stadium, the NFL venue still under construction in Inglewood. Relevent Sports Group, organizer of the ICC, was in negotiations to stage a Barcelona-Real Madrid game at the stadium in early August, according to people with knowledge of the talks.

The stadium, the centerpiece of a $5-billion development on the site of the former Hollywood Park racetrack, is scheduled to open in late July with a Taylor Swift concert and will be home to the NFL’s Rams and Chargers. However, in the last two weeks, at least two of the 3,000 construction employees working on the project have tested positive for COVID-19. Temperature screening was instituted Wednesday night for all workers.

“We are heartbroken for the thousands who have succumbed to the awful COVID-19 disease, and our thoughts are with everyone who’s been impacted during this difficult time,” said Danny Sillman, CEO of Relevent Sports Group, organizer of the ICC. “The health and safety of players, staff, fans, and all who are involved in our matches is always paramount. The lack of clarity of when social distancing and shelter-in-place restrictions will be lifted and the uncertain international football calendar with the potential for European domestic leagues and UEFA tournaments being played into August means planning a Men’s International Champions Cup this summer is unfeasible.”

The women’s ICC, in its third year, is still scheduled to be played this summer, although it is likely that event will eventually be canceled as well. Organizers are more hopeful that the ICC Futures, a youth tournament played in Florida with academy teams from top clubs around the world, will go forward in the winter as planned.

The ICC, which debuted in 2013 with two games at Dodger Stadium, has grown into the most ambitious summer club tournament in the world, with games on four continents. The 2019 event, played between July 16-Aug. 10, featured 12 teams and 17 venues.

A 2014 game between Manchester United and Real Madrid at Michigan Stadium set a U.S. attendance record by drawing a crowd of 109,318 while the 2017 Real Madrid-Barcelona game in Miami Gardens was the first El Clasico played outside Spain.

Plans for this summer’s tournament were being scaled back even before the COVID-19 pandemic hit. Because the 12-team Copa America, an expanded 24-team European Championship and the Tokyo Olympics were also planned for this summer, dates for a reduced 2020 ICC were pushed into late July through mid-August, with the earliest games to be played in smaller MLS stadiums.

Dignity Health Sports Park in Carson, which last summer played host to Bayern Munich-Arsenal, was among the likely venues for this summer’s tournament.

Those tournaments have all been moved to next summer. But the coronavirus has led most domestic leagues in Europe to scramble their schedules, perhaps extending play into July and August, which would leave many clubs unavailable for even a reduced ICC.

Organizers, who have multiyear agreements with several major European teams, declined to name the clubs that had agreed to play in this summer’s tournament, but published reports said Premier League leader Liverpool, reigning French champion Paris Saint-Germain, English power Chelsea and Ajax, leader of the Dutch Eredivisie, were among those being considered.