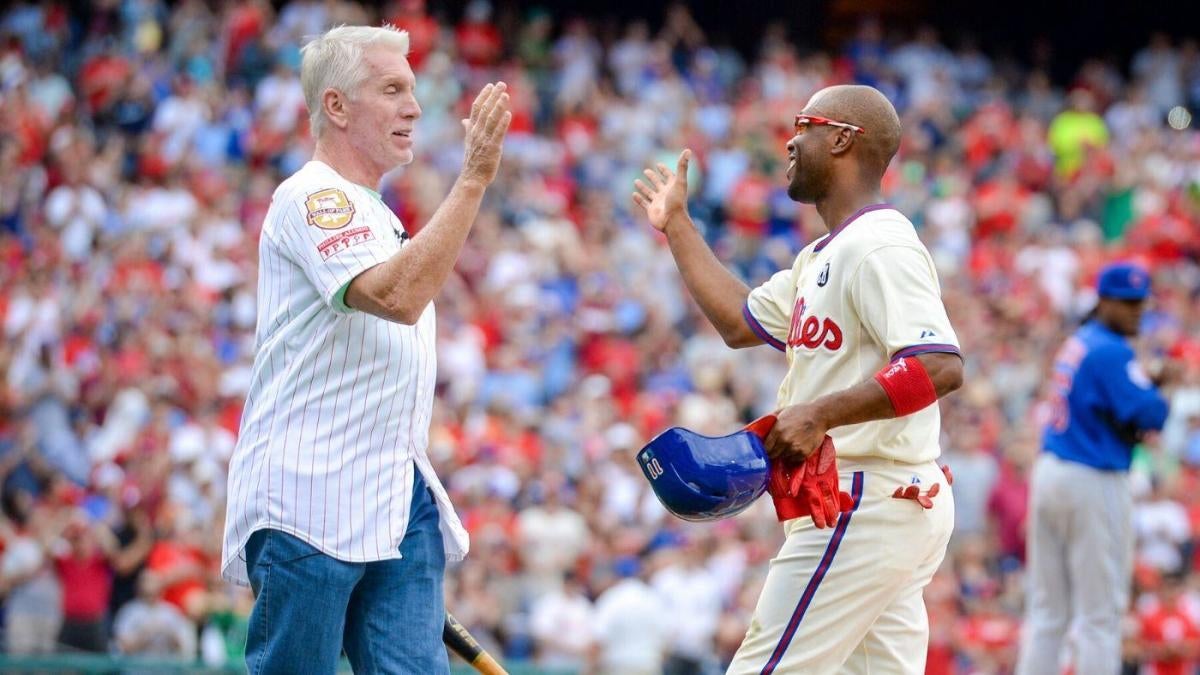 We’re left with lots of really old options who weren’t even all-time greats or one contemporary one and he’s a great pick. Bobby Abreu, come on down. As a (hopefully?) fun twist, I’m making a Baseball Stars team for each. That’s right, the old-school Nintendo video game “Baseball Stars,” which I still consider to be the best baseball video game ever. It allowed you to create teams and I used to make all-time lineups for prominent MLB franchises. There are the eight position players with four starting pitchers, one reliever and five bench position players on each Baseball Stars squad.Baseball Stars uses six characters for each name. What follows is the Baseball Stars lineup.

Chase Utley and it’s not even close.

It’s possible J.T. Realmuto gets there, but he isn’t there yet. Not real close. Apologies go out to the lovable Carlos Ruiz (“Chooch” is an amazing nickname, too). I’m going with Darren Daulton. The three-time All-Star had two top-seven MVP finishes and was the backstop on the 1993 pennant-winner.

Hamilton spent time here, too, but it was in the 1800s. I’ll pass. I love Shane Victorino and we have to give a shout to Lenny Dykstra. Richie Ashburn, though, is a Phillies legend for good reason. The six-time All-Star led the league in hitting twice and on-base percentage three times while in Philly.

With a tip of the cap to Larry Bowa, we give the nod to Jimmy Rollins in a blowout.

Look at the gap at the top of the Phillies all-time position player WAR leaderboard:

Lots of names here. Jonathan Papelbon, Ryan Madson, Gene Garber, Kent Tekulve, Billy Wagner, Brad Lidge, Jose Mesa, Steve Bedrosian. Mitch Williams! Though he did cough up that one big homer. I’m gonna go with Tug McGraw. In 463 appearances with the Phillies, he worked 722 innings and pitched to a 3.10 ERA (120 ERA+). With no obvious choice, it’ll be fun to pick an old-school ironman reliever.

A lot of players from a long, long time ago pop up here. There’s Delahanty, Sherry Magee, Billy Hamilton (not that one) and Lefty O’Doul. Hall of Famer Chuck Klein had some eye-popping numbers, but it was an extreme era for offense. In an extreme pitcher era, Dick Allen stood out. He hit .290/.371/.530 from 1963-1969, good for a whopping 153 OPS+. He’s the pick.

This is actually going to be pretty easy. We have to apologize to the likes of Curt Schilling, Roy Halladay, Jim Bunning and several others, but there’s a clear-cut top four to me: Steve Carlton, Robin Roberts, Pete Alexander and Cole Hamels. The top three are all-time greats while Hamels was a fixture in the second Golden Era of Phillies baseball. In parts of 10 seasons, he pitched to a 3.30 ERA (124 ERA+) while racking up nearly 2,000 regular season innings and winning both the NLCS and World Series MVPs in 2008.

On the bench, we’ve got lots of good options. Let’s go with Chooch (Carlos Ruiz) because it’s too awesome a name to leave off. Johnny (Callison), Garry (Maddox), Von (Hayes) and (Scott) Rolen round us out. Tons of tough-luck omissions here like Dykstra, Victorino, Bowa, Kruk, Greg Luzinski, Cy Williams and lots from the Dead Ball Era.

Let’s get to the Phillies roster.

In an effort to avoid going stir crazy with MLB and every other major sports league shut down during the coronavirus pandemic, I’ve decided to take a look at the best of the best for each baseball franchise. We’re going to have a 30-day series creating an all-time team for each MLB club. We’ll break down one team per day throughout April, and it’s the Philadelphia Phillies‘ turn today.As always, feel free to hit me up on Twitter with your own team (@MattSnyderCBS).  Ed Delahanty is third among Phillies in position player WAR, but man, he last played for them in 1901. That’s just too far back for my taste. John Kruk could be an option, but I like Ryan Howard. I know WAR doesn’t treat him well, but before his Achilles injury, Howard was a .275/.368/.560 hitter, good for a 138 OPS+. His 162-game average through 2011 was 46 homers and 137 RBI. He’s my selection.