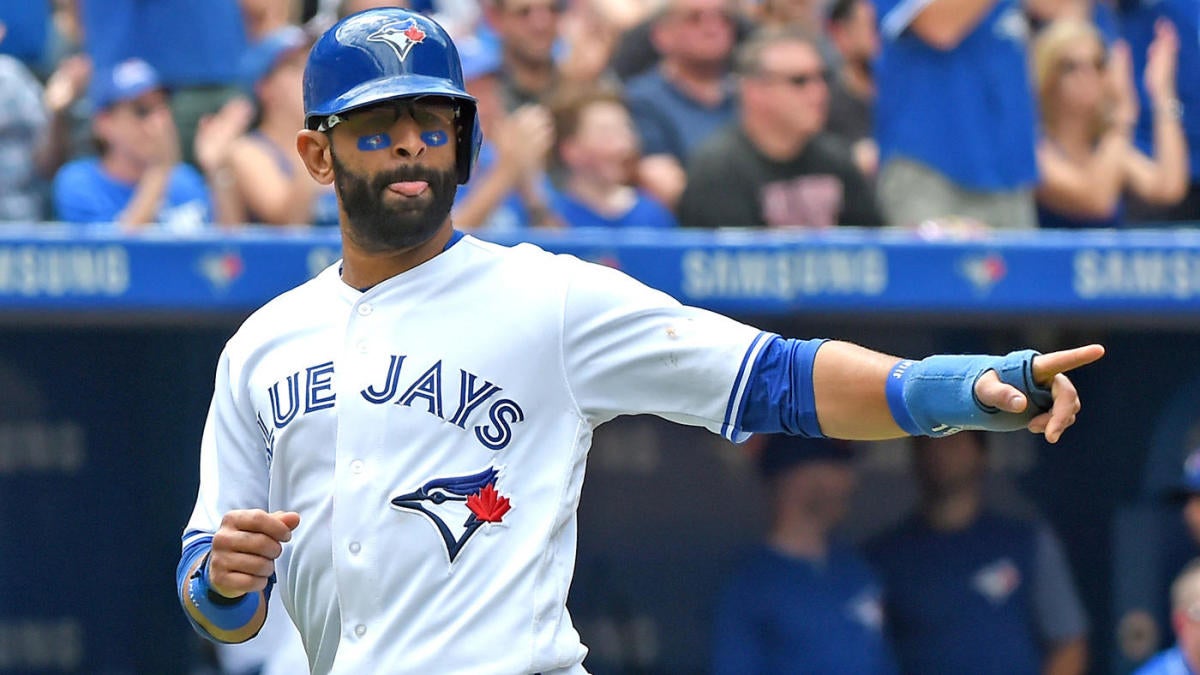 Fernandez was a better hitter than Whitt, obviously, but I like Fernandez’s speed in front of the top of the order when the lineup turns over. I loved me some Shannon Stewart, but the pick here is George Bell. In nine seasons with the Jays, Bell finished fourth in MVP voting twice and won the 1987 award when he had 47 homers and 134 RBI. His 202 homers are sixth in franchise history. In an effort to avoid going stir crazy with MLB and every other major sports league shut down during the coronavirus pandemic, I’ve decided to take a look at the best of the best for each baseball franchise. We’re going to have a 30-day series creating an all-time team for each MLB club. We’ll break down one team per day throughout April, continuing today north of the border with the Toronto Blue Jays.

Apologies to Jesse Barfield, Shawn Green, Alex Rios and, of course, Joe Carter here, but it’s Jose Bautista and not really all that close.

We’ve got a trio of strong candidates here. Vernon Wells was excellent during his time in Toronto. Devon White is one of the best defensive center fielders in baseball history and was one of the centerpieces during the two World Series titles. Lloyd Moseby is also a great candidate. In WAR among position players, Wells is fifth, Moseby sixth and White tied for ninth in club history. I’m gonna take Vernon Wells due to being the best hitter of the trio, since it’s a video game and all.

Bench: Jesse (Barfield), Lloyd (Moseby), Edwin (Encarnacion) and Joe (Carter). Screw it. I’m punting a backup catcher because it’s a video game. Also, I originally had John Olerud over Joe Carter, but Carter deserves the spot for one of the biggest home runs in baseball history. I’d also be willing to accept arguments for Russell Martin at catcher over Whitt.

For being one of the best players in baseball through much of his career, Roberto Alomar sure changed teams a lot. His longest stint was with the Blue Jays, where he was an All-Star and Gold Glover all five seasons while winning two rings and racking up the three best seasons at the position in club history. He’s the easy pick.

Hat tips to Russell Martin, Pat Borders, Darrin Fletcher, Greg Myers and John Buck, but we’re going with the venerable backstop from the early days of the franchise. He was actually drafted by the Jays in the expansion draft and spent parts of 12 seasons with the club: Ernie Whitt.

Given how relatively young this franchise is, that’s a pretty stellar roster.

For the final two spots, we’ve got a decent group. Jimmy Key is third in WAR. Roger Clemens probably had the two best individual seasons in Jays’ history. Jim Clancy and Juan Guzman were great. Pat Hentgen is fourth in WAR. I’ll go with Pat Hentgen, the 1996 Cy Young winner, and Roger Clemens for the upside.

As always, feel free to hit me up on Twitter with your own team (@MattSnyderCBS). Two guys are head and shoulders above everyone else here. It’s the ridiculously underrated Dave Steib along with the Hall of Famer Roy Halladay. We don’t really even need to discuss these two spots.

He didn’t have a ton of time in Toronto, but Josh Donaldson was there long enough to supplant Kelly Gruber. Donaldson’s first year in Toronto saw him win MVP while the Blue Jays advanced to the ALCS for the first time since 1993. His second season saw a fourth-place MVP finish and another trip to the ALCS.

It’s absolutely loaded over here. There’s early prime Fred McGriff, Edwin Encarnacion, John Olerud, Carlos Delgado and several others worth consideration. Good thing we have a DH spot to fill, right? I’m partial to Carlos Delgado, though. His 162-game averages from 1996-2004: .286/.397/.565 (145 OPS+), 41 doubles, 40 HR, 124 RBI and 105 runs. He is third in franchise history in position player WAR while leading in slugging, OPS, runs, total bases, doubles, home runs, RBI, walks and is third in OPS+.To the lineup.Apologies to Olerud, Barfield and Encarnacion, but I’ve gotta go with Fred McGriff. At 153, he’s the franchise leader in OPS+. As a (hopefully?) fun twist, I’m making a Baseball Stars team for each. That’s right, the old-school Nintendo video game “Baseball Stars,” which I still consider to be the best baseball video game ever. It allowed you to create teams and I used to make all-time lineups for prominent MLB franchises. There are the eight position players with four starting pitchers, one reliever and five bench position players on each Baseball Stars squad.Sadly, the baseball world lost Tony Fernandez back in February. He’s the easy pick here without sentiment. Only Jose Bautista has more WAR in club history. Fernandez is the franchise leader in hits and triples. He missed the first championship, but was traded back for the 1993 title. In that World Series, Fernandez hit .333 with a .423 OBP. He drove in nine runs in six games.

The Dallas Stars have a solid core with Tyler Seguin, Alexander Radulov, Rope Hintz, John Klingberg, and Miro Heiskanen. Even though the team is one of the top 4 seeds in the Western Conference with the new playoff format, their success was mostly due to their excellent defensive play. They allowed the second-fewest goals in […]