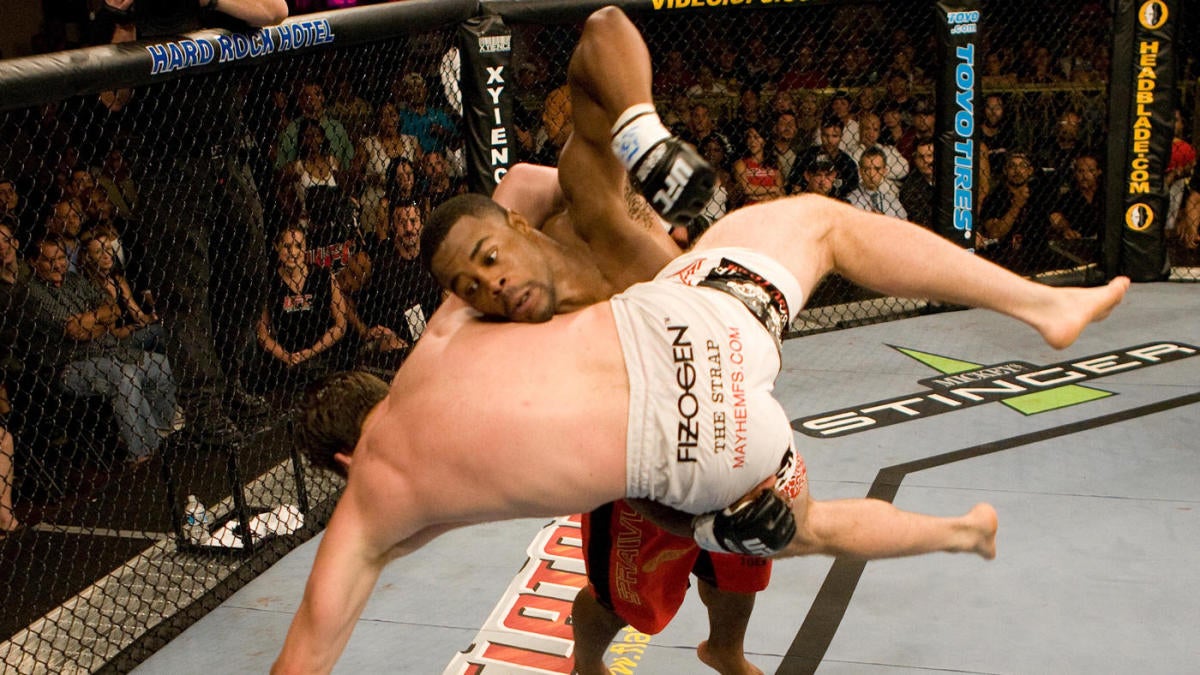 When Rashad Evans stepped into “The Ultimate Fighter” house in 2005, the show was heading into its second year after the first season breathed new life into the UFC. Evans entered the tournament as a heavyweight, despite having competed as a light heavyweight throughout his pre-TUF career. Evans was the smallest man in the heavyweight tournament, taking a chance to get into the Octagon despite standing under six feet tall.

It was a gamble that ultimately paid off for Evans, as he not only won the tournament, but established a character fit for reality television. From Evans’ first fight on the show, he became a central focus of the heavyweights.

“I had just graduated from Michigan State and I was working at a hospital,” Evans said on the CBS Sports “State of Combat” podcast of his decision to audition for the show. “I was a security guard, I worked at night. Part of my job was putting bodies in the morgue and doing that kind of thing. I used to put bodies in the morgue and take them out. When I got done doing that at the hospital, in the morning I would work out before I went to sleep. Then, at night, before I went to work, I would get a training session in and I did that for about a year or so.”

Subscribe to our podcast State of Combat with Brian Campbell for Rashad Evans’ complete break down of his time in the TUF house and how he and UFC president Dana White get along on the show below.

With the fight scene lacking in Lansing, Michigan, Evans’ teammates would routinely make a one hour trip to Coldwater, where they’d train with UFC Hall of Famer Dan Severn. It was Severn who approached Evans with the initial idea after being told the producers had begun casting for season two.

“‘They’re looking for heavyweights and you’re like a 185 pounder,'” Evans said he was told by Severn. “At the time, I weighed like 195. I was like, ‘No, no, no. Dan, I can do it. Let them know I’m interested.’ I bulked up, I was at 195 when I started. Working at the hospital, there was a lot of starchy food. I was in good with the lunch lady, so she would hook me up with all kinds of macaroni and cheese and potatoes and that kind of food. I would eat it all night to the part where i hated food. I got pretty big. I got myself up to about 220, pretty solid from 195. It wasn’t all flab. There was some muscle in there too and I sent in a video to get on the show.”

Evans took on Tom Murphy in his first fight of the tournament, winning a decision in what UFC president Dana White called one of the most boring fights he had ever seen. Evans had spent much of the fight dancing around the Octagon, drawing the ire of opposing coach Matt Hughes. Murphy would remain undefeated in his professional career, retiring with an 8-0 record.

“Matt just did not like me at all,” Evans said of his relationship with Hughes.” He did not like me from the moment he laid eyes on me. It’s weird, because I actually went up to [UFC legend Pat] Miletich’s camp a couple times and worked out with those guys when I was doing my Michigan circuits. It was weird, he was actually one of my favorite fighters so I was really bummed that I was feeling like he didn’t like me. It was heartbreaking at the same time, but I was like, he’s a man just like I’m a man.”

Evans’ next opponent was Mike Whitehead, who had been in fights with some top heavyweight names in the past, including losses to Tim Sylvia (twice) and Ben Rothwell. Evans would win another decision, and again would not receive full credit for his win, with Hughes and his team complaining about Whitehead seemingly giving up during the fight. A dejected Whitehead — who White claimed was the favorite to win the tournament — told his team he was done with fighting after the loss. He went on to have 22 more fights in his career.

Having advanced to the semifinals, Evans was paired with Keith Jardine. With Jardine and Evans both members of Rich Franklin’s team, Hughes and Evans buried the hatchet and the former welterweight champ worked Evans’ corner for the bout, though not before no-showing much of the preparation for the fight. Evans would again take a decision victory, advancing to the finals despite his size and having been the underdog in every fight on the show.

“We ended up beating all of their heavyweights, so there was nobody left on their side for me to fight. Since we defeated all their heavyweights, I had to go on Team Hughes side and fight for Team Hughes. That was a turn I was not ready for because, as we know, me and Matt hated each other. Now I had to have him in my corner for the biggest fight of my career. It was unnerving for me.”

Evans’ Octagon coronation would be complete at the live finale, when he beat 6-foot-7-inch Brad Imes by split decision, locking up a UFC contract in the process. Evans dropped back to light heavyweight before fully coming into his own and becoming UFC light heavyweight champion by knocking out Ultimate Fighter season one winner Forrest Griffin, marking him as one of the show’s biggest success stories.