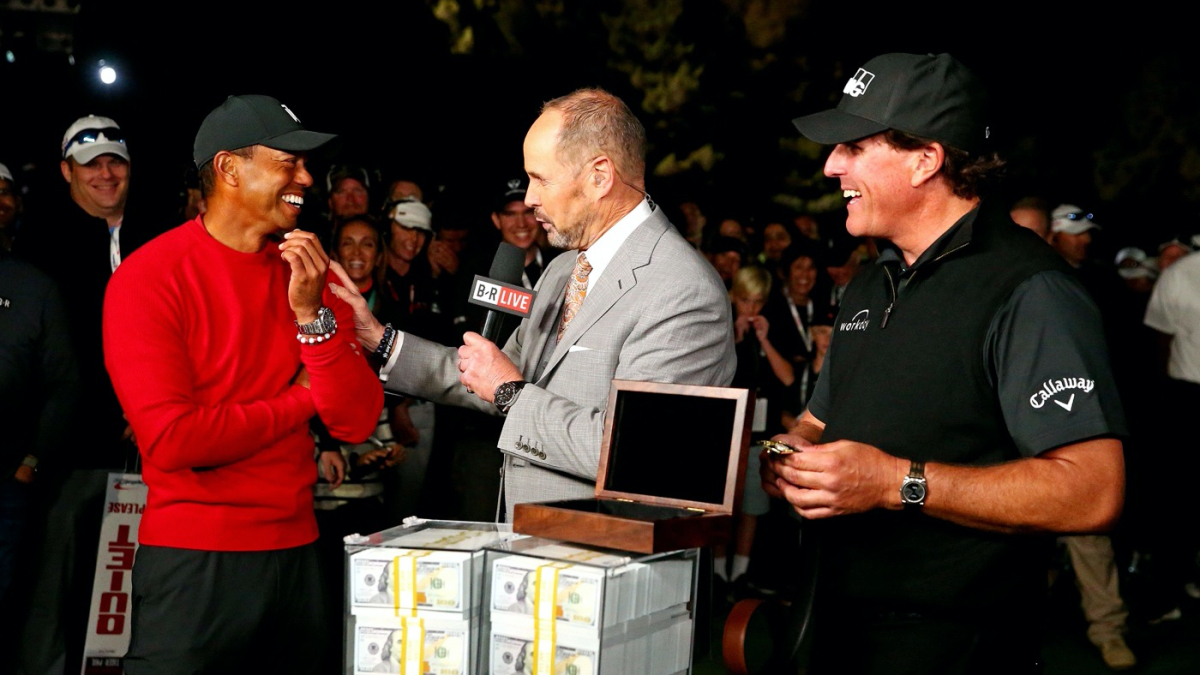 It has long been presumed that golf would be the easiest sport to restart in the post-COVID-19 era because of the distance factor and because it’s fairly simple and straightforward to play events without fans. However, we didn’t know exactly what form it could come back in.

With the PGA Tour on hold until the end of May at the earliest and the four major championships currently either postponed or in flux, what does a re-entry to the sports world look like through the lens of golf? Apparently it could look like Tiger Woods and Phil Mickelson playing a follow-up to their match over Thanksgiving 2018 when they went head-to-head for $9 million.

Mickelson was asked about this on Twitter the other day, and his response was incredibly interesting.

Do you think there is a chance you two go play a round mic’d up with one camera guy and just put it out there on a stream for people to watch?? We need live sports.

“Working on it,” Mickelson said. When pressed on whether he was being serious, Mickelson noted, “I don’t tease. I’m kinda a sure thing.”

Lefty won their original match in the dark after multiple playoff holes (a makeshift par-3 played on repeat, to be clear) and took home all $9 million (although it’s difficult to imagine Woods wasn’t paid a hefty appearance fee).

While nearly every pro league has shut down its games in the United States, it’s not inconceivable that this could take place. One, they could more or less abide by the social distancing guidelines on the course. Two, people are craving any kind of sport right now so the ratings would be off-the-charts good. Three, they could raise a ridiculous amount of money to help support COVID-19 workers. Unless I’m whiffing big time on this, it seems like a win all the way around.

Whether it comes fruition is a different story. Woods played a skins game match with Jason Day, Hideki Matsuyama and Rory McIlroy last fall in Japan, but that deal doesn’t run up against whatever he and Mickelson were slated to do in the future. This according to what his agent Mark Steinberg told ESPN one year ago.

Woods and Mickelson had a separate deal with Turner Sports for a pay-for-TV match that took place on the day after Thanksgiving last year, with Mickelson winning $9 million as he beat Woods in extra holes. Steinberg said talks are still ongoing about when and where another match would take place and whether it would involve other players.

“There are a lot of factors that go into it, but this does not affect whether or not we do the next iteration of Tiger and Phil, whatever that might look like,” Steinberg said. “That’s a different domestic deal we’ve constructed with Turner. We still think [the Friday following Thanksgiving] is a great day. We think that’s a date we could own.”

Maybe things have changed since then, maybe not. But according to Mickelson’s innocuous tweet over the weekend, it does seem like there’s at least a sliver of a chance that this event could happen in the near future.