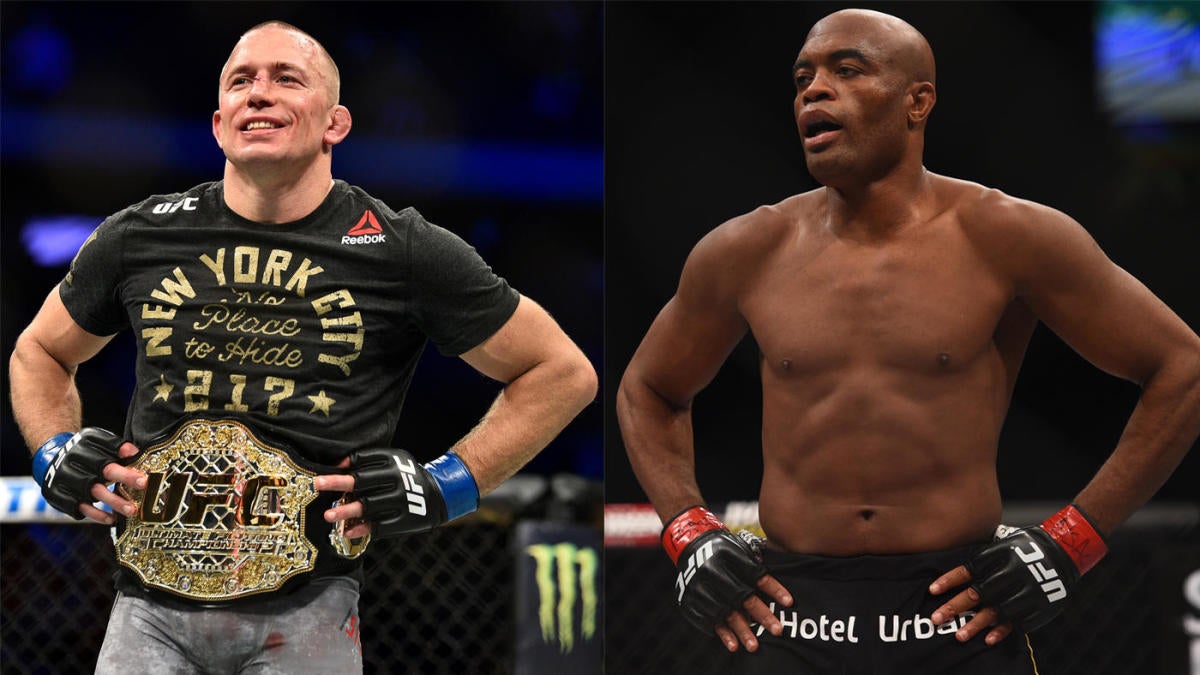 With UFC president Dana White still guaranteeing the UFC 249 fight between lightweight champ Khabib Nurmagomedov and Tony Ferguson will move forward in the face of the global coronavirus pandemic, MMA fans remain nervous the long-awaited showdown will be canceled for a fifth time.

Nurmagomedov vs. Ferguson is one of MMA’s all-time most snakebitten fights, falling apart for an increasingly bizarre number of reasons as both men have become the dominant forces in the lightweight division. But they are far from the only fighters MMA fans have longed to see face off against all odds. And many of those fights never materialized at all, nor will they ever.

There was a period in time where talk of a fight between GSP and Silva was a near constant in MMA circles. Silva had dominated the middleweight division while St-Pierre was head and shoulders above the rest of the welterweight division. With no one available to push either and only 15 pounds separating their divisions, fans and media turned to the only thing that made sense: a champion vs. champion superfight.

At the start of 2011, with GSP riding an eight-fight winning streak and Silva having won 13 in a row, White said wins by both in their next fight meant “we’re probably going to do that fight,” with St-Pierre moving to middleweight full time. The only problem? After GSP won his next fight, the Canadian wasn’t interested in moving up in weight for the fight. That would be the story again in 2013, when St-Pierre predicted Silva’s loss to Chris Weidman. And again in 2015, when a retired St-Pierre said he wasn’t interested in returning for a fight against Silva after Silva’s drug test failure. Ultimately, St-Pierre would return for one more fight in 2017, finally moving to middleweight and winning the title from Michael Bisping.

The saga of Rousey and Cyborg is long and complicated, tinged with the same weight differences and drug test reservations as St-Pierre vs. Silva. But Rousey, Cyborg and White’s relationship was far more contentious over the years as fans clamored to see MMA’s two most dominant women throw down. Both women fought in Strikeforce, but it was after Rousey moved to the UFC, becoming an international superstar in the process, that the demand really escalated. In 2014, Rousey would claim Cyborg, who had failed a drug test in 2011, had been “injecting herself for so long that she’s not even a woman anymore. She’s an ‘it.'” Still, she said, she would fight her in the UFC, but worried that the UFC would be “stuck” with the Brazilian. White pointed to Cyborg’s inability to cut from 145 to 135, her “steroid issues,” and a litany of other issues while also one time claiming Cyborg looked like “Wanderlei Silva in a dress.”

The difference in weight continued to be a sticking point even after Cyborg finally signed with the UFC in 2015, though Rousey also claimed the fight being made was a money issue. Still, with the two under the same promotional banner and everyone involved seeming to want to see it come together, it seemed inevitable. Until, that is, Holly Holm knocked Rousey out cold in one of the most iconic moments in UFC history. Rousey would lose again in her next fight, this time being knocked out in less than one minute by Amanda Nunes. Cyborg plugged along after Rousey retired from the sport as dominant as ever until December 2018 when she also fell victim to Nunes — her loss coming in just 51 seconds and taking the final bit of shine off the idea of a fight between two women once thought near-invincible.

Couture vs. Fedor was the heavyweight fight to make in 2007. Couture had stunned the world with a return to heavyweight where he won the UFC belt from Tim Sylvia in a dominant performance. He successfully defended the title against Gabriel Gonzaga and Zuffa purchased PRIDE FC, where Fedor had established himself as the top heavyweight in the world. Instead of coming to terms to bring Fedor to the Octagon, the Russian powerhouse made his way to Affliction. Between the failure of the UFC to sign Fedor and issues over his own pay, Couture shocked the world by walking away from the UFC while still champion.

Couture’s plan was to sit out until his contract expired and pursue a fight with Fedor anywhere it could take place. Zuffa would sue Couture for breech of contract before the two sides eventually came to terms once again and Couture returned to the Octagon. Shockingly, the fight almost came together when Couture was offered the chance to face Fedor for Rizin on New Year’s Eve in 2015. Couture, already four years into his retirement, was forced to decline the opportunity as he did not feel he could get back in shape.

This fight lacks the years of longing the top three have, but still has an interesting history. In fact, there is no UFC 151 because this fight failed to come to fruition. Henderson returned to the UFC in 2011, following a four-fight stint in Strikeforce that culminated in a knockout of Fedor Emelianenko. After picking up a win over Shogun Rua at UFC 139, Henderson was lined up to face Jones, who was coming off his third successful light heavyweight title defense. Then, less than two weeks out from the event, Henderson suffered a knee injury and had to pull out of the bout.

Jones would ultimately refuse to fight Chael Sonnen on short notice, forcing the UFC to cancel an event for the first time in the history of the promotion. This spiraled into even more chaos as the UFC said Jones would fight Lyoto Machida at UFC 152, but Machida refused the short notice fight, leading to Jones vs. Vitor Belfort as the main event while Belfort was campaigning as a middleweight. Henderson would go on to lose his next three fights, ending any chance of a showdown with Jones.

Yet another champion vs. champion superfight that wasn’t to be. While Aldo built a resume as arguably the greatest featherweight of all time between his run in WEC and UFC, fans wondered if there was a fight available that could make his star shine brighter. Pettis entered the picture as a challenger to Aldo’s title at UFC 163, where he would drop down to fight the champ rather than wait for a shot at the lightweight strap. Unfortunately, a knee injury forced Pettis from the bout.

One event later, however, Pettis stepped up as a short notice opponent for lightweight champion Ben Henderson, winning the belt with a first round armbar. With both Pettis and Aldo holding the title, it seemed the previously booked fight would now come together with even more meaning. Aldo spoke after his win at UFC 169, saying he wanted to move up to 155 to face Pettis. But Pettis got the call to be a coach on The Ultimate Fighter. By the end of 2015, both Aldo and Pettis would lose their titles and the once high-demand fight would fade into nothingness.