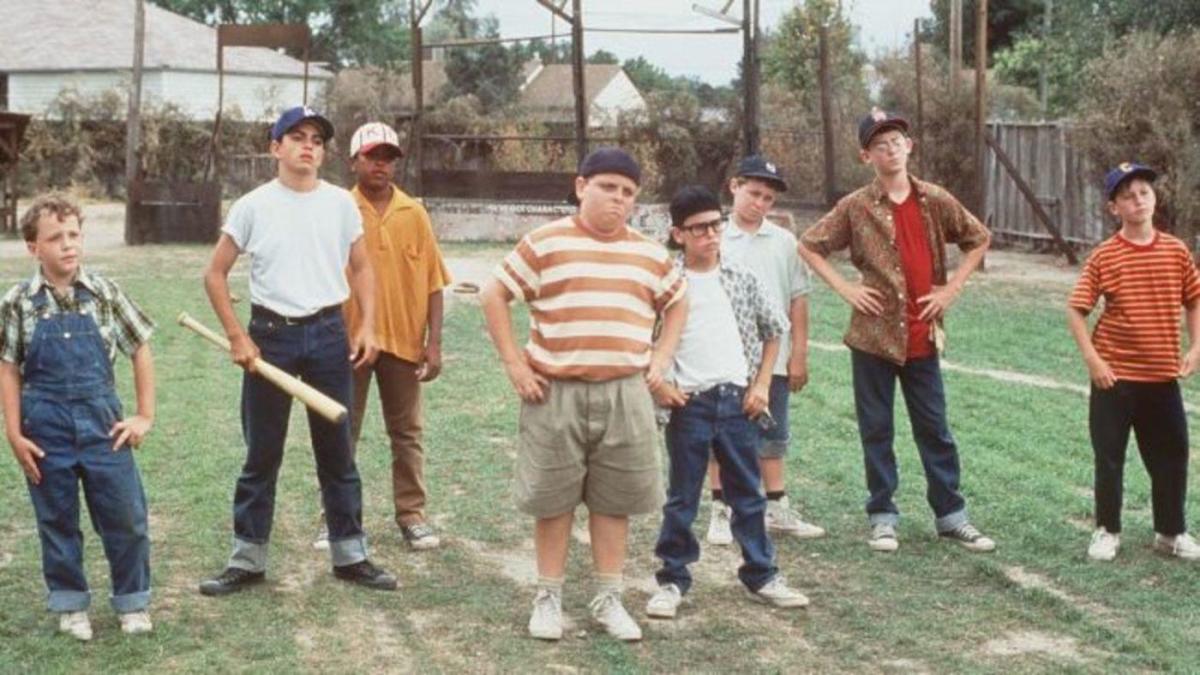 1. Major League – Of course there’s going to be biased here. I’m a human being and this is my favorite baseball movie, so it sits at the top of my list. Is it realistic? Nope. I don’t care. It’s all about the characters here. How many all-timers did they give us? Wild Thing Rick Vaughn, Willie Mays Hayes, Jake Taylor, Lou Brown, Pedro Cerrano, crafty veteran Ed Harris. Even the villains (Rachel Phelps, Clu Haywood, The Duke) are amazing. Bob Uecker as Harry Doyle is a godsend and we can’t forget about the best color man in the league, Monty. They even made the best faux-commercial ever (“don’t steal home without it!”). Even to this day, for me, this movie is a tour de force. Stream on: Amazon Prime Video10. Soul of the Game – I’ve been fascinated by the history of the Negro Leagues since I first learned about them as a kid. How good were the likes of Oscar Charleston, Josh Gibson and Satchel Paige and what if the game was integrated from the get-go? We can never know the answer, sadly, other than knowing that the aforementioned trio were all-time greats. Soul of the Game — a 1996 HBO production — follows Gibson (Mykelti Williamson, not far removed from his role as Forrest Gump’s best friend Bubba) and Paige (Delroy Lindo) with a young Jackie Robinson (Blair Underwood) vying to be signed by Branch Rickey. It’s fun at times. At others, you’ll feel sorry for Paige and Gibson. It’s definitely worth a look for any history-loving fans. Stream on: The full movie is currently available on YouTube

5. The Sandlot – A group of nine kids get together during the summer to play baseball nearly every day. Sign me up. There seems to be a common bond between all the best baseball movies and great characters with excellent one-liners. Catcher Ham Porter is the best for the zings and Benny “The Jet” Rodriguez is amazingly likable as the group’s leader and best player. But the entire group is perfect, from the stud players like Kenny DeNunez to the lesser players like Smalls (our main character). For much more on that, I wrote a lot about The Sandlot a few years ago. Stream on: Amazon Prime Video15. Sugar – Like many films, “Sugar” uses its structural setting — the world of baseball — to address larger and more useful themes. It’s the story of a young Dominican ballplayer who’s thrust into the stateside minor leagues and the cultural and economic hurdles he must navigate in order to carve out a life in the game. I won’t tell you whether he’s able to do that, but I will tell you that Sugar is like no other baseball movie you’ve seen. – Dayn Perry Stream on: Amazon Prime Video6. The Natural – If nothing else, go watch Roy Hobbs’ season. He was putting one together that puts the best we’ve ever seen in the majors to shame. Sportswriter Joe Posnanski once estimated that this was Hobbs’ line: 72 games, 307 PA, 171 hits, 42 doubles, 13 triples, 51 homers, 106 RBIs, 101 runs, 30 walks, 44 strikeouts, .557/.655/1.415. Of course, the big payoff is one of the best we’ve ever seen in any baseball movie. Stream on: Netflix 8. Moneyball – It’s a bit controversial. First off, you have the curmudgeons in the “Moneyball doesn’t work” crowd who think on-base percentage (not making outs, how novel!) is “analytics” or “sabermetrics.” Then there’s the legitimate complaint that this “island of the misfit toys” approach of the movie completely ignores the A’s were loaded with talent like Tim Hudson, Mark Mulder, Barry Zito, Eric Chavez and Miguel Tejada. Instead, it focuses on the role players they added and takes liberties with transactions while also making Art Howe somewhat of a villain. Here’s the thing, though: If you treat the movie as fiction it’s a really fun watch. That’s my recommendation. Stream on: STARZ; Amazon Prime Video4. 42 – This is the Jackie Robinson story with Chadwick Boseman playing the pioneering Hall of Famer. A good tandem read to this is Roger Kahn’s “Rickey and Robinson.” Kahn was the sportswriter who knew Robinson best and the movie tells several of Kahn’s stories from the book nearly verbatim. While there are no doubt liberties taken — I don’t think Jackie ever did a bat flip — it’s still a great movie. Pee Wee Reese with his arm around Jackie gives all the feels. Stream on: Amazon Prime Video2. A League of Their Own – A perfect way to honor the All-American Girls Professional Baseball League, which was a real league that played from 1943-54.  The film’s most famous line — “there’s no crying in baseball” — was perfectly delivered by Tom Hanks, even if it has been completely overplayed in the years since. No matter, though, everything else is still great. Dottie Hinson (prime Geena Davis) is an all-timer even if her jealous and bratty sister Kit isn’t. Madonna as “All the way” Mae and Rosie O’Donnell as Doris are an excellent pair atop the loaded batting order for the Rockford Peaches. And how about Marla Hooch? What a hitter! I will never shake my complaint over the final play of the championship, but it’s fine. It’s still an all-time great baseball movie. Stream on: Showtime (also available for rent on multiple platforms)Most of us are holed up right now at home, wherever that may be. We don’t have sports to keep us company, and nobody knows when live events will return. But there are, at least, sports movies. Fans longing for Opening Day as winter turns to spring have plenty of options when it comes to baseball movies. 13. Pastime – Glenn Plummer is Tyrone Debray, a young and incredibly talented pitcher who is taken under the wing of aging and washed up pitcher Roy Dean Bream (William Russ). Bream passes along his secret out pitch (the “Bream Dream”) to Debray. I honestly don’t think the pitch would actually work, but who cares? It’s a very good movie. Stream on: Pastime is currently not available streaming, but can be purchased on DVD. You can view the trailer here.7. The Bad News Bears – It’s Little League with a coach bringing a cooler full of beer into the dugout, a kid who comes to games on a motorcycle (yes, he’s driving it to Little League) and a no-nonsense ace pitcher in Amanda Whurlitzer. What’s not to love? Yes, we’re watching the original with Walter Matthau as Coach Buttermaker, not the reboot. Jackie Earle Haley is brilliant as the bad boy Kelly Leak, though it seems like he bats too often. Still, it’s great. Shout out to Tanner Boyle as another memorable character. Stream on: STARZ; Amazon Prime Video  14. Damn Yankees – Whatever Lola wants, Lola gets. It’s a baseball musical from the 1950s about a distraught Washington Senators fan selling his soul to the devil in order for the Senators to win the pennant. Aside from the fact that if you’re selling your soul you should definitely not stop at the pennant and should go all the way to the World Series championship, it’s entertaining enough. Stream on: Amazon Prime VideoMany of us know about these. Many do not. There are some hidden gems in here.

First up, the obvious classics. If you’re a baseball fan who watches baseball movies, you’ve likely seen these, but they are good enough to rewatch. And if you are a baseball fan who likes baseball movies and haven’t seen them, right this wrong and get to viewing. 12. Long Gone – This is a 1987 HBO production following the Tampico Stogies, a low-level minor-league team “as they battle for the league championship amidst the corruption and racism of the American south,” per the IMdB description. The star is William Petersen, a player-manager who goes by “Stud” Cantrell. Dermot Mulroney plays the new kid, Jamie Weeks ,and Virginia Madsen is Dixie Lee Boxx, the main love interest. Stream on: The full movie is currently available on YouTube 3. Bull Durham – The immortal Crash Davis (Kevin Costner) alone makes this worth the watch. He is perhaps the best baseball movie character of all-time and I’m willing to say his ejection sequence is my favorite scene in any baseball movie. Hell, maybe any movie, period. The “this is what I believe” speech is tough to top, too. Isn’t that a little excessive for the Carolina League? Susan Sarandon as Annie is just *chef’s kiss* while Tim Robbins is great as Nuke LaLoosh. The lollygag speech from the manager, Skip, toward the beginning is pretty great, but the runaway leader for the best dugout performance is Robert Wuhl as Larry. Stream on: IMdB TV; Amazon Prime Video We’re here to cobble together a list of 15 baseball movies that are worth a watch. 11. 61* – Another HBO production, this movie follows Roger Maris’ chase of Babe Ruth’s 60 home runs in a single season. The asterisk is there because MLB at the time ordered his 61st homer to have an asterisk once Maris didn’t break the record within 154 games (Ruth’s record came in a time where they played 154; by 1961 they were playing 162 games in a season). Thomas Jane is excellent as Mickey Mantle and Barry Pepper plays a very believable Maris. How about Chris Bauer (Frank Sobotka from The Wire!) playing Bob Cerv? This is a fun one. Stream on: HBOGoStream on: STARZ; Amazon Prime Video 9. Field of Dreams – If you build it, he will come. Kevin Costner plays a broke farmer who builds a baseball field in the middle of his corn field and a bunch of dead baseball players show up and play for his family each night. We also end up with this amazing speech from the inimitable James Earl Jones: