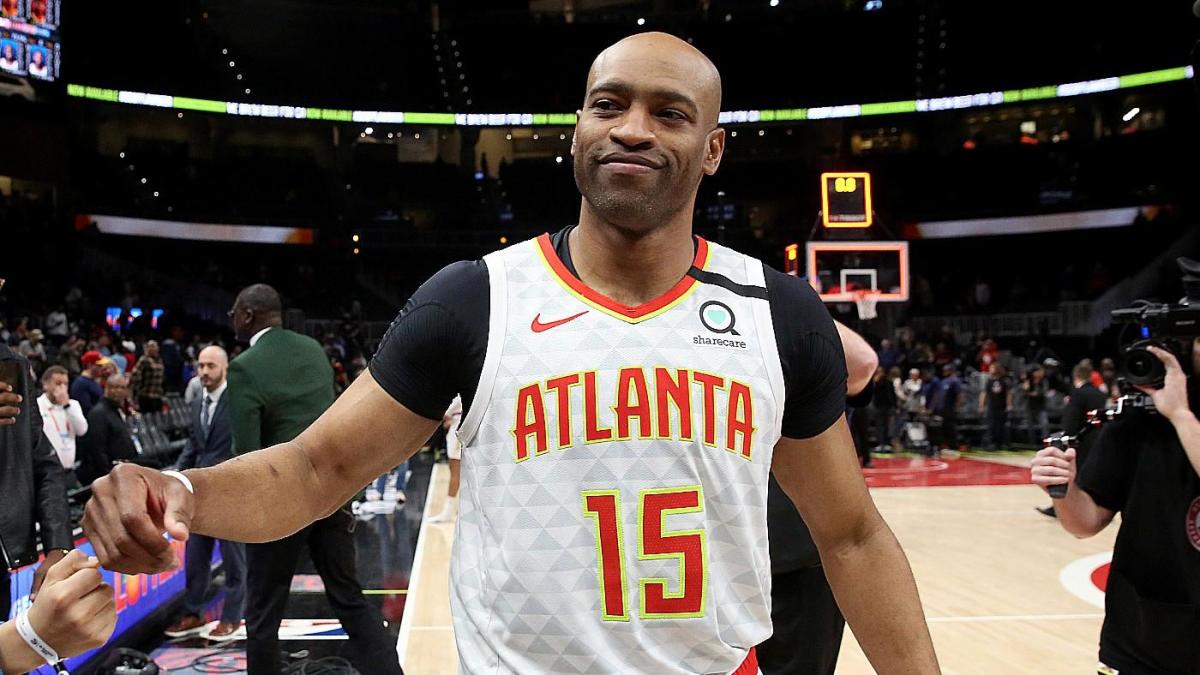 When the NBA announced it would postpone the remainder of the 2019-20 season because of the growing concern of the coronavirus outbreak, there were a lot of questions regarding when — or if — the season would resume. Lost in all the madness after the abrupt stoppage was whether we witnessed Vince Carter’s career come to a screeching conclusion.

NBA commissioner Adam Silver is still optimistic that the league can resume once the cloud that is the coronavirus disperses and the world can get back to normal. However, with 20 games remaining on the regular-season schedule and the playoffs yet to start, there is a possibility that the NBA could jump right into the playoffs when play resumes. If that’s the case, then the final stat line of Carter’s career is five points and one rebound in 12 minutes of a Hawks loss to the New York Knicks. After that game, Carter spoke about the potential of that being his final game with a calmness and sense of acceptance that was very sobering.

“It’s a weird way to say I’m calling it a career,” Carter said. “You’re used to not having any more games left, instead I technically have 15 games left, but if not, I’m one with it. It’s just weird, as we were getting briefed on everything and what’s going on, I was just sitting there like ‘all right this is it, just like that.'”

Carter also reflected on his journey over the course of this season to accept retirement.

“I went from the hesitation of starting the season and going through it, to not really saying the word retirement,” Carter said. “To having a conversation with Kobe which gave me the confidence and comfort to talk about retirement, to this point where the season’s over and in my mind I know there’s 15 games left but we’re not sure yet, but it’s cool though. Basketball’s been good to me. I’ve enjoyed each and every moment of it, good and bad so if this is it it’s all good, at least I made my last basket.”

Despite the fact that Carter announced before the season started that this would be his last, there has been little — if any — pomp and circumstance surrounding his farewell tour. There’s been no nightly jersey swaps or milestone nights throughout the season like Dwyane Wade and Dirk Nowitzki received in their send-off tours. There was the thought that Carter should have been included in this season’s All-Star festivities in some capacity. If it wasn’t as an honorary All-Star like Wade and Nowitzki, then surely it could’ve been to honor the 20th anniversary of his awe-inspiring 2000 Dunk Contest performance that still lives on as the greatest in NBA history.

There was nothing, though, over the three-day celebration in Chicago, mainly because Carter said prior to the season starting that he didn’t want to be on the All-Star team unless he deserved it.

“If I earn it, give it to me,” Carter said via NBA.com. “But that’s just me. Don’t take this the wrong way when I say it like that. That’s just who I am. I’m very appreciative of earning my All-Star spots, being a leading vote-getter, so I don’t know. I just have a hard time with it. We’ll see if later down the line my view changes.”

He reiterated that stance last week when asked if he was disappointed that he might not get the traditional fanfare or ceremony that comes with a player’s final game before retirement. However, he was visibly emotional about the question and was trying to fight back tears.

To think that this is how Carter’s career could end, in a loss to the abysmal Knicks where he only put up five points in front of a half-full arena on the same night that the NBA announced the season would pause because of a pandemic is unfathomable. It’s a far cry from the death-defying dunks we grew accustomed to seeing from Carter on a nightly basis.

If this is how his career ends, we did not show nearly enough appreciation of his career throughout this final season. While he never won a championship, and spent his career playing for eight teams, Carter’s basketball credentials are strong enough for enshrinement in the Naismith Basketball Hall of Fame. He was an eight-time All-Star, and put together a dazzling campaign fresh out of North Carolina that not only won him Rookie of the Year, but made him a beloved player across the league. Carter carried the Raptors to the first playoff appearance in franchise history during his rookie season, and improved upon that by advancing to the second round a year later.

Despite playing for eight teams, the early years of Vinsanity will always be remembered by basketball zealots. From 2000-2004, he was the top vote-getter for the All-Star Game three out of four years — he was unseated by Kobe Bryant in 2003 — and was part of a new crop of All-Star talent that inherited the league after Michael Jordan retired.

He never reached the NBA Finals or won an MVP award, but his game was universally respected across the league, and not just because he could dunk on virtually anybody. He was a lethal catch-and-shoot scorer even in his early years — he could take you one-on-one on the wing or in the post and his 3-point shooting was always consistent. He’s faded into the background the last few season as a veteran while playing on teams lottery aspirations, but he’s managed to make himself valuable as a mentor to those younger players.

The fact that Carter has been able to play a record-setting 22 seasons in the NBA alone is a feat in itself, but it wasn’t something he ever set out to do. However, while talking to him back in December after a road loss to the Chicago Bulls where everyone in the United Center was chanting his name, he said he’s been able to stick around so long because he still enjoys putting in the work.

“I could’ve easily gotten to 15-16 years not willing to do all the steps it takes for me to get prepared now and that would be it,” Carter told CBS Sports. “Skipping steps won’t keep you around long, and all of the laundry list of things I do every day I still enjoy and that’s why I’m still here. If I’m not willing to do that, the secret doesn’t matter, because you’ll skip steps after a while because you’ll get tired of doing the same thing over and over. But I’ve committed to that so long ago that it’s part of me now.”

If the season doesn’t resume or returns without Carter getting a proper farewell, it will be a hollow ending to an otherwise electric career. Carter might be at peace with his retirement, but not even he could’ve been prepared for this abrupt ending. If the league can resume safely with fans in attendance, one could only hope that Carter would get one more game to remind us why he’s one of the most universally beloved players of the past two decades.