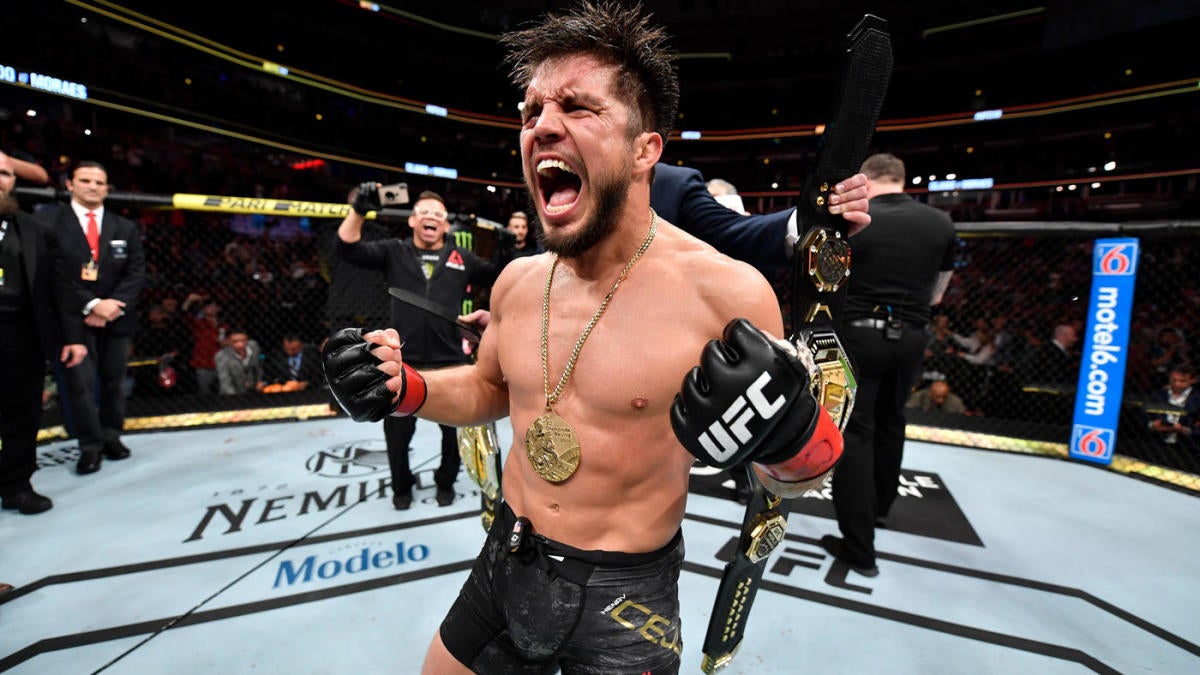 If there are two things UFC bantamweight champion Henry Cejudo has in spades, it’s an insatiable lust for greatness mixed with an equally shameless strategy of bringing attention to himself.

“Cringe, corn — whatever you want to call it,” Cejudo told CBS Sports. “But one thing you will call me is the greatest combat athlete of all-time.”

From social media skits involving him dressing his championship belts in diapers to a constant refrain that all of his critics will eventually “bend the knee,” there’s little question the 33-year-old Cejudo is the undisputed cringemaster. The problem is that it’s hard to argue with his success.

A 2008 Olympic gold medalist from Los Angeles, Cejudo has won five straight UFC fights including a trio of consecutive victories over Demetrious Johnson, TJ Dillashaw and Marlon Moraes that demand historical respect. Along the way, he captured UFC titles at 125 and 135 pounds before recently giving up his flyweight crown.

If you think Cejudo is content with what he has accomplished, you’d be wrong. Along with a scheduled title defense against Brazilian legend and former featherweight king Jose Aldo on May 9 — provided the fallout of the coronavirus outbreak allows — Cejudo maintains he’s 100% serious about achieving another goal of becoming the first three-division champion in UFC history.

Although Cejudo concedes that pay-per-view king Conor McGregor is more likely to be given the chance first by UFC brass in the welterweight division, “The Messenger” believes he will be the first to accomplish it if a fight against featherweight champion Alexander Volkanovski — who is notably short at 5-foot-6 — can get made.

“Alexander Volkanovski is about two inches taller than me so I like that advantage. Why not? I can make history,” Cejudo said. “Conor McGregor might get that third shot of fighting for a third belt, but he’s not going to win. He’s not going to beat a big guy like Kamaru Usman. For me, I feel like I actually could do it. I feel that I actually could beat Volkanovski and I sincerely mean that. It’s not just smoke coming out of that ass.”

The problem with Cejudo’s best-laid plan is that Volkanovski appears headed into an immediate rematch with former champion Max Holloway. Not to mention, Cejudo has received heavy criticism atop such a loaded bantamweight division after petitioning for (and getting) his first title defense against the 33-year-old Aldo, who has lost two straight despite looking good in his bantamweight debut against Moraes last year.

Because of his recent track record of having faced and defeated the best across two divisions, Cejudo isn’t willing to hear said criticism.

“I think people are overlooking that I’m challenging a former legend,” Cejudo said. “Yeah, his last fight he did lose but a lot of people thought he won against a No. 1 contender. He’s a legend and I’m going be fighting him in Brazil and that’s it. I’m doing it for my Brazilian people.”

Cejudo also maintained that the fallout of Deveison Figueredo’s victory over Joseph Benavidez after failing to make weight ahead of their recent flyweight title bout won’t bring him back down to 125 pounds because of how difficult the weight cut is.

“I’m Mexican and I like Mexican food too much,” Cejudo said with a smile.

Yet considering a champion wasn’t crowned, he also believes he should still be recognized as the flyweight king.

“[Figueredo’s victory] is a cheating thing. Two and a half pounds is a lot of weight,” Cejudo said. “It’s not so much the weight of it but the fatigue of getting down to that weight and how it’s going to leave your body. Joe did lose but Figuerido didn’t win. You know who won? Standing here right there.

“I never left [the division.] I defend my title on the couch.”