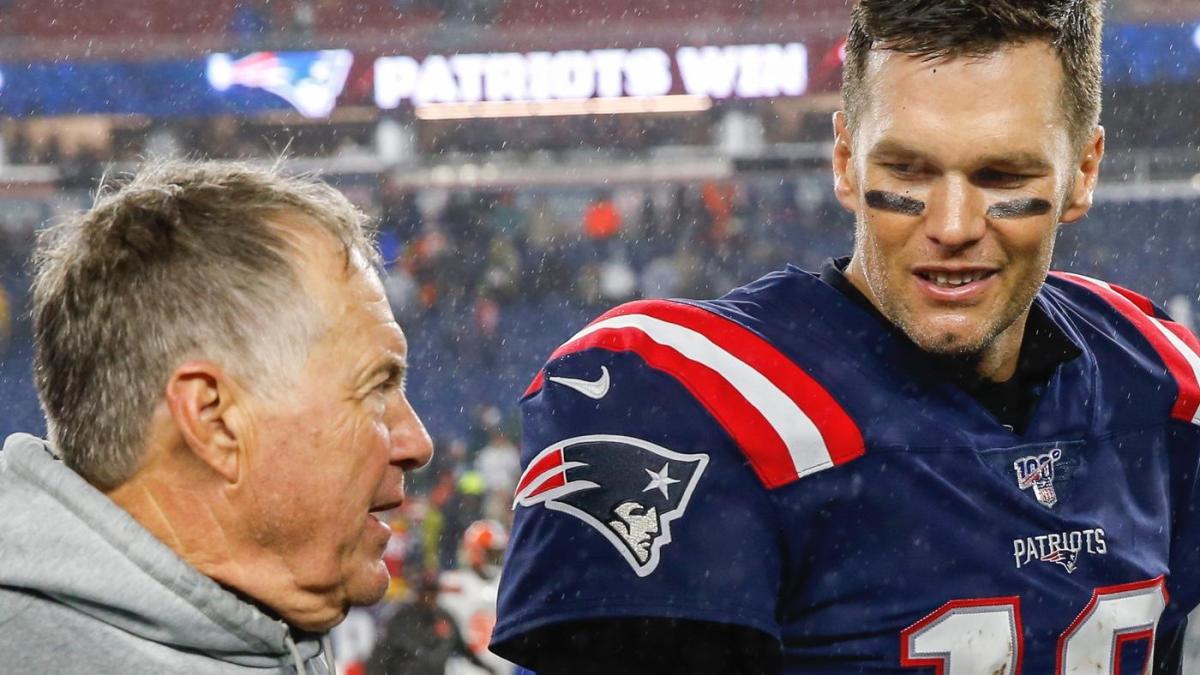 One of the longest-running sports bar conversations — a hypothetical that many believed would never come to fruition — is now about to be settled. Team Brady or Team Belichick. Who ya got?

The dynamic duo, at the very heart of the Patriots dynasty going back nearly two decades together, are officially now splitting up. It’s over. Tom Brady’s announcement Tuesday morning that his Patriots career is over leaves Bill Belichick without a franchise QB on his roster for the first in, seemingly, forever. Heck, no one knew it at the time, but when he began coaching the Patriots he actually had two franchise quarterbacks — and once that sixth-round pick got a chance to play after Drew Bledsoe got hurt, and went on to win an improbable Lombardi Trophy that year the NFL would never be the same again.

And for all of those years, with the Patriots literally, on average, in the Super Bowl every other year, and with them a fixture in the AFC Championship Game almost every year, there would be the inevitable sports talk debate. Who was more vital to the team’s success? Brady? Belichick? Which would be more vulnerable without the other? How would it eventually end for these two if they did actually more on playing football or coaching football on different teams?

Generally, as these discussions go, someone ends up in one camp or the other. Of course, it could also well end up that this doesn’t work out all that swimmingly for either of them. It just might end up in a lose/lose situation of some sort. And how much can be quantified about either’s greatness, or role in all of those championships, one way or the other, should both look like mere mortals in what might be a very brief window working against one another (particularly should Brady stay in the AFC, or, gulp, the AFC East for that matter)?

What will become increasingly obvious with the passing of time is that this is the greatest coach and QB conversation ever. To do what they did, in a league of ultimate parity and with free agency and salary caps and the schedule and everything else set up to make everyone go 8-8 or close to it each year, was never properly appreciated as it was unfolding. The degree of this accomplishment — the truly epic nature of dominating the modern NFL and 31 other franchises for the better part of 20 years — will only be seen in its proper perspective 10 or 20 years from now, especially if the Super Bowl reverts back to being a series of on-offs between teams that don’t get right back there the following year, as it tended to be before the Patriots became the AFC favorite every year that Brady was healthy.

So, yeah, could be that there are no big winners here, and only degrees of losing based on the bar being set so impossibly high for the player and the coach based on past performance. It could be that both look somewhat diminished in the eyes of many depending on how the next few years play out.

But I do believe its fair to say that Belichick has the most at risk, at least in terms of GOAT conversations go. His legacy, should the Patriots become a 5-11 team that meanders along with the dregs of the league, would surely take a hit. Someone who not only doesn’t court public favor — but actually seems to go out of his way to play the role of villain in front of the cameras and microphones — has a legion of fans and media with the knives already out, looking to carve into his iconic status. Throw in the various cheating scandals, and his tenure with the Browns, and the “What has Bill ever done without Tom” chorus will be loud and vociferous.

And Belichick’s legacy as a GM and team builder will also fall into a more nuanced critique now. Without question, having the greatest QB to ever live covered up a lot of mistakes in trades and signings and draft picks. No one ever did more with less as often as Brady did. Everything around – save for the scheme and system – was in a semi-constant vortex of change, and save for Randy Moss at the end of his career and Gronk at his pre-hobbled peak, you aren’t going to find many mustard jackets among Brady’s pass catchers and running backs from his long tenure in New England.

There has already been a defection of sorts among New England’s free agents beyond just TB12 and how quickly Belichick can recast this franchise and stabilize it may prove to be his greatest test ever. Should he succeed at that, however, then those preconditioned to hate his every move would be forced to tip their fedora in his direction and concede that he has surpassed Vince Lombardi and everyone else who has ever coached a football game at any level.

As for Brady, I mean, what else does he possibly have to prove? The man is going to turn 43 in August. He has already pounded Father Time into submission the way no one else in professional sports ever has. Should he look like a mortal 43-year old at times with his new team … well, come on man, that’s how it works. If he manages to conquer the mountain he has been talking about for years — and flourish as a winning NFL QB through age 45 — well that’s a really cool cherry to plop on top what has already been the most delicious cake of a career that anyone can imagine. But that’s setting the bar higher than anyone ever has, and rewriting the record books in the regular season and postseason is already plenty to put him on the NFL’s Mount Rushmore forevermore (another endless bar chat that will have to fill the void during these trying times with coronavirus altering the live sports landscape for a while).

To be clear, nothing that Brady does at this point should be held against him. If ever someone earned the right to fully embrace free agency, now as he approaches his mid-40-ish-years — it is this guy. If he ends up making a few playoff runs like his idol, Joe Montana did as a Chief after leaving San Francisco, then great. The GOAT becomes even more GOATIER!

And if he doesn’t, he’s already doon enough for long enough that this can be considered the addendum to what was already arguably the greatest individual career in the history of team sports. There have been too many incredible chapters already written for it to ever demean anything he’s already accomplished. He’s playing with house money and looking to chart his own course.

Personally, I wouldn’t bet against him reversing the fortunes of some club — the Chargers or Raiders or Dolphins, or, I guess, Bucs, although I just can’t see him in a Tampa uniform. He had nothing around him last year and did what he had to do to survive and stay upright, but with a half-decent cast I believe he will be a top 10 QB in this league in 2020.

It would have taken years for the Patriots to be able to present that kind of roster. Nothing lasts forever. Not even Brady and Belichick. To me, they are already the best to ever do it, and the next 24 months won’t change that. But man will it be fun to watch and talk about.