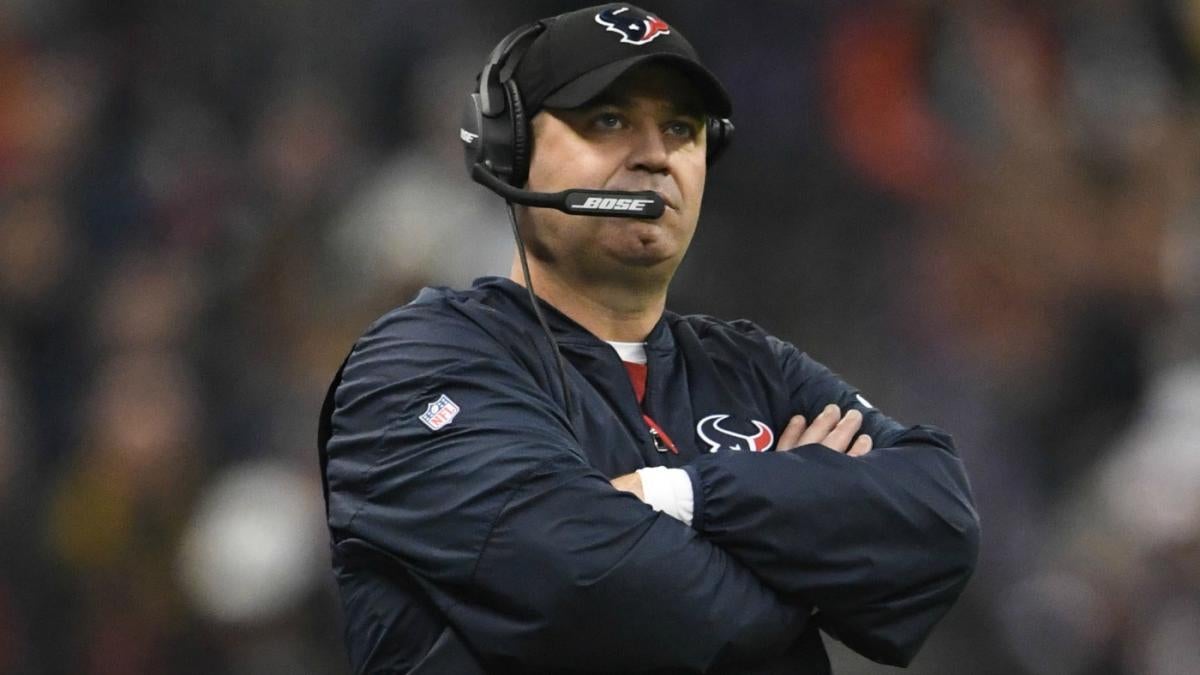 The NFL’s legal tampering period is officially underway. It’s at this time when clubs can speak with upcoming free agents, discuss terms and come to a verbal agreement to a deal that will become official when the new league year begins on Wednesday. Day 1 of this period of the NFL calendar was certainly a hectic one and seemingly featured just as may trades as it did signings.

Of course, with all this movement, there will certainly be some winners and definitely some losers across the NFL. Now that the opening wave is nearly in the books, those haves and have-nots are starting to come more into focus. As you’ll see below, we’re shining a light on a handful of clubs that can pat themselves on the back for a job well done, while we have another crop that will try to be better in the days to come.

General manager Steve Keim is probably still pinching himself at this very moment. Not only were the Cardinals able to dump David Johnson’s contract, but they were able to land star receiver DeAndre Hopkins in the process. Bananas, I know. Not even virtual GMs in Madden would think a deal like this is possible. By acquiring the likes of Hopkins, who is currently signed through the 2022 season, the Cardinals have a clear-cut No. 1 receiver and heir apparent to Larry Fitzgerald whenever he elects to walk away from the game. This also bolsters the weapons around second year quarterback Kyler Murray in what promises to be a very prolific offense in 2020. Placing the transition tag on running back Kenyan Drake also gives Arizona the power to match any free agent offer he gets.

Filled with multiple shocking blockbuster trades that involved prominent wide receivers and record-setting contracts, the first day of the NFL’s free agency legal tampering period did not disappoint. Will Brinson and the Pick Six Podcast Superfriends are here to break it all down; listen below and be sure to subscribe for daily NFL goodness.

The Dolphins came into this legal tampering period with the most amount of dough to spend in the NFL and they’re acting like it. Miami seems to be making it a point to use this cash to address the defense and bring in some star power. The biggest fish they caught so far is former Cowboys corner Byron Jones, who they have now made the highest-paid corner in the entire NFL. Jones will play under a five-year contract that is set to pay him a total of $82.5 million with $57 million in guarantees. Miami also decided to bring in former Patriots linebacker Kyle Van Noy on a four-year, $51 million deal. These are the high-profile moves Miami has pulled the trigger on thus far and Brian Flores seems to be cooking up what could be a very well rounded defense for the foreseeable future. Oh yeah, and the Dolphins still have three first round picks this year to address their other needs. Don’t sleep on Miami.

While the Arizona Cardinals turned in the blockbuster of the early wave of Day 1 of the legal tampering period, the Buffalo Bills picked up the baton in the evening by striking a deal with the Minnesota Vikings to land receiver Stefon Diggs. Buffalo gave up a massive collection of draft picks (first-round pick, fifth-round pick, a sixth-rounder, and a 2021 fourth-round selection) in exchange for Diggs and a 2020 seventh-rounder, but it is worth it for them for a multitude of reasons. Diggs, 26, is young and just entering his prime. He’s posted back-to-back one thousand yards seasons and just turned in a 2019 campaign where he had a career-high 1,130 yards receiving and 17.9 yards per reception. Not only are the Bills getting a young, talent pass catcher to pair with quarterback Josh Allen, but he’s also under team control for quite some time. He signed a five-year, $72 million contract just last offseason and is signed through the 2023 season. His cap numbers are also pretty manageable as they don’t exceed $12 million in any of the upcoming years.

This Stefon Diggs trade was truly a win-win for both sides. You’d think Minnesota moving on from a talent like him would put them in the losers category, but the return was simply too good for them to pass up. Highlighting that collection of draft picks is the No. 22 overall pick in the first round of a draft that is said to be extremely deep at receiver. The Vikings could, in theory, draft Diggs’ replacement with that selection and have him on his rookie deal. They also are able to clear $11.5 million off their cap and rid themselves of any more drama, which should be looked at as a positive.

Baker Mayfield is a happy man today. The Browns made Austin Hooper the highest paid tight end in the NFL and, most importantly, strengthened the offensive line by signing right tackle Jack Conklin to a three-year deal. Mayfield was sacked 40 times last season, which was tied for seventh most among quarterbacks in 2019. The arrival of Conklin should help that number go down and keep him upright to throw to the likes of Hooper, who should thrive in head coach Kevin Stefanski’s offense.

The Ravens are very sneakily acquiring a solid amount of high draft capital. After shipping off tight end Hayden Hurst to the Atlanta Falcons for a second round pick and a fifth rounder, Baltimore now has five selections in the first three rounds. So not only do the Ravens trade away a player who was unhappy with his role on the roster, but they also continue to gain more top-tier draft picks to give themselves tremendous flexibility at the 2020 NFL Draft.

Tagging Shaq Barrett and re-signing Jason Pierre-Paul aside, the fact that the Bucs are still seemingly in the thick of the Tom Brady sweepstakes is a win in itself. Tampa is reportedly putting out all the stops to potentially land the six-time Super Bowl champion and the longer it takes for him to come to a decision, the more likely it becomes he elects to depart Foxborough. Tampa is in as good of a spot as it can be.

Have the Bears finally seen the light? Chicago has been mentioned as a possible destination for a number of quarterbacks. According to Ed Werder of ESPN, the Bears are focused on acquiring Andy Dalton or Nick Foles via trade. Both have played for either head coach Matt Nagy or members of the Bears coaching staff, so there is some familiarity there. The big point, however, is that the club does seem intent on making Mitchell Trubisky compete for the starting job in 2020 instead of it simply being handed to him. That realization is a win for the Bears franchise. Now we just have to see if they follow through by bringing another signal caller to town.

Because of the deep crop of pass rushers the Niners have in Arik Armstead, Nick Bosa and Dee Ford, the club had the flexibility to move on from DeForest Buckner. By acquiring the No. 13 overall pick from the Indianapolis Colts, San Francisco now has the opportunity to bring in a top-tier prospect at a position that is a little bit thinner. Could they be a player for one of the many highly touted wide receivers that headline this draft? That could be one avenue that has just opened up for the NFC champs.

The Colts appear to be on the doorstep of bringing aboard Philip Rivers at quarterback and also pulled off one of the bigger blockbusters of the day in trading for Buckner. The 25-year-old is a tremendous addition to the defensive line and just had a season where he totaled 62 tackles, 7.5 sacks and two forced fumbles. The No. 13 pick was a high price to pay, but if they feel like they have Rivers in the bag, they could quickly compete in 2020.

I mean, does this need much explaining? Not only did the Texans ship away one the game’s best wide receivers in the thick of his prime in DeAndre Hopkins, but they also took on running back David Johnson’s entire contract in the process, which includes a $20 million cap hit over the next two seasons. Yikes. Johnson, meanwhile, was demoted in the midst of last season after looking like a shell of his former self. Sure, he was fantastic during his sophomore season in 2016 where he totaled over 2,000 yards from scrimmage, but a lot has changed for the 28-year-old between then and now. Absorbing Johnson and all that comes with him seems rather foolish, especially when it comes at the cost of moving on from Hopkins. Houston still doesn’t have a first round pick, either.

The longer Tom Brady remains unsigned, the greater the chance it is he departs for another franchise. The fact that New England has still yet to retain their six-time Super Bowl champion is worrisome if you’re hoping TB12 sticks around Foxborough for the rest of his career. New England did franchise its star left guard Joe Thuney and is hoping to work on a long-term deal, but right now all that matters with the Patriots is who he’ll be blocking for in 2020. On top of all that, Bill Belichick watched two of his disciples in Matt Patricia and Brian Flores snatch two of his linebackers as Jamie Collins and Kyle Van Noy have signed deals with the Lions and Dolphins, respectively.