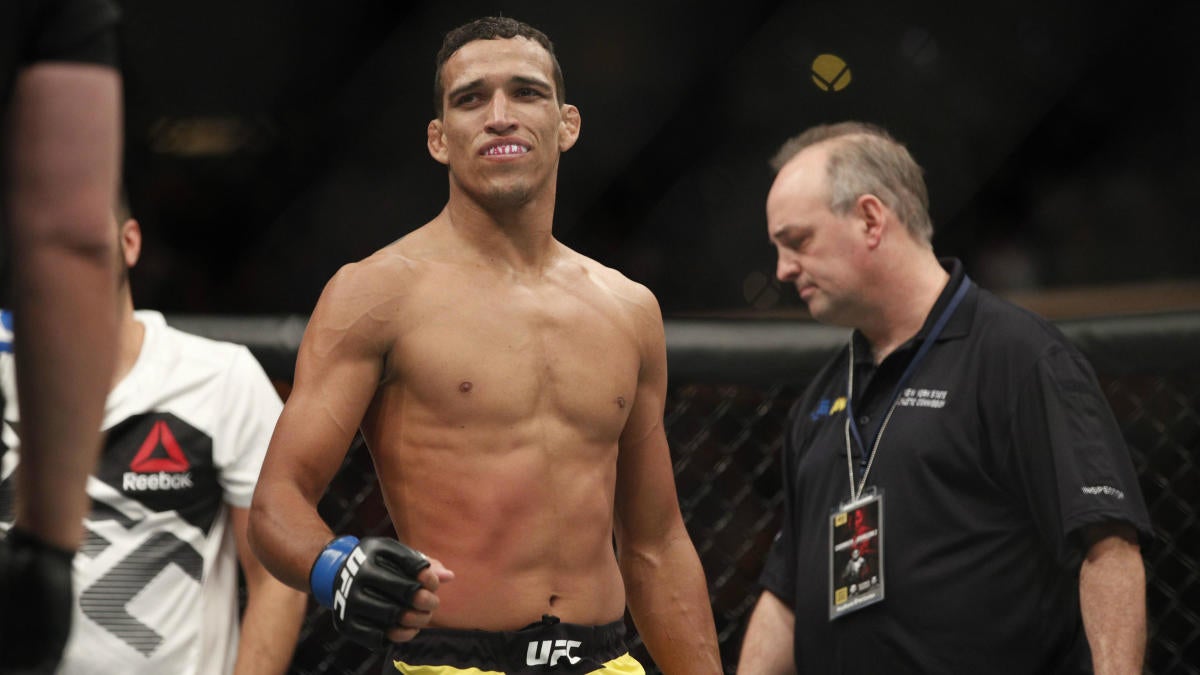 Ranked lightweight contenders headline the bill on Saturday at UFC Fight Night 170 as Kevin Lee and Charles Oliveira collide in the main event. The 12-bout showcase takes place at Nilson Nelson Gymnasium in Brasilia, Brazil, and the main fights on the UFC Fight Night 170 card start at 8 p.m. ET. The No. 8-ranked Lee (18-5) is a former interim title challenger who has seen his stock climb following a first-round knockout of the previously undefeated Gregor Gillespie in November.

Marley won the first-ever “ToutMaster” UFC betting contest sponsored by MMAOddsBreaker and also appears regularly on multiple MMA betting and DFS shows. Over the past year, $100 bettors who have followed Marley’s picks are up more than $18,000.

Just last week at UFC 248, Marley accurately predicted a unanimous-decision victory for middleweight champion Israel Adesanya (-275) against third-ranked challenger Yoel Romero (+235). He reasoned that the titleholder’s edge in reach and Octagon control would allow him to control the fight from the outside while limiting risk, and that’s precisely how Adesanya operated.

Marley also called the successful strawweight title defense for Weili Zhang (-180) against Joanna Jedrzejczyk (+160) in the co-main event. Anyone who has consistently followed him is way up.

Now, with UFC Fight Night 170 fast approaching, Marley has carefully studied every matchup on the card, identified the best value in the UFC odds and released his MMA picks for every single fight. He’s only sharing those selections right here.

The winner of Saturday’s main event could enter the picture for a title bid down the line. Nicknamed “The Motown Phenom,” Lee, 27, was considered one of the UFC’s rising stars during a stretch in which he won nine of 10 fights. The Michigan native also gave a respectable showing in a short-notice bout against Ferguson for the interim title in October 2017.

But his stock dropped amid a two-fight losing streak to Al Iaquinta and Rafael dos Anjos. Lee was in jeopardy of falling out of the rankings, but reversed the slide with a stunning head-kick knockout of Gillespie in a bout in which he was the underdog.

Oliveira, 30, made his UFC debut in August 2010 with an arm-bar submission of Darren Elkins. He has gone 16-8 with the promotion while sharing the Octagon with some of the sport’s biggest names. However, inconsistency has prevented him from positioning for a title shot.

The Brazilian appears to be peaking at the right time. He has stopped his last six opponents and is coming off back-to-back knockouts of Nik Lentz and Jared Gordon last year. Marley is giving out his Lee vs. Oliveira picks and MMA predictions here.

Marley is backing Johnny Walker (-150) to get a stoppage win against Nikita Krylov (+130) in a battle of light heavyweight prospects on the main UFC Brasilia card.

Walker (17-4), was seen as perhaps the fastest-rising prospect in the division when he reeled off three consecutive stoppage victories to begin his UFC his career. But the Brazilian’s climb came to a halt after he was knocked out by fellow contender Corey Anderson in the first round of his last fight.

Krylov (25-7) is in his second stint with the UFC. The 28-year-old Ukranian had won four straight before dropping two of his last three. But those losses came to respected veterans in Glover Teixeira and Jan Blachowicz, who is now in line for a title shot against Jon Jones.

“Walker seems like a knockout-or-bust fighter, but his power is real. If he can connect on Krylov, he can put him out,” Marley told SportsLine. “Walker by knockout is the most likely outcome.”

How to make UFC Brasilia picks

Marley also has strong picks for Lee vs. Oliveira, Burns vs. Maia and every other bout on the UFC Brasilia card. He’s backing one combatant who’s “the better fighter everywhere” and will have a “huge edge.” Get every pick here.

Who wins Lee vs. Oliveira? And how exactly does each fight end? Visit SportsLine now to get detailed picks on every fight at UFC Fight Night 170, all from the expert who’s up more than $18,000 on MMA in the past year, and find out.

Sports News - May 24, 2020
0
This would be a huge bummer after weeks of planning for the monumental event