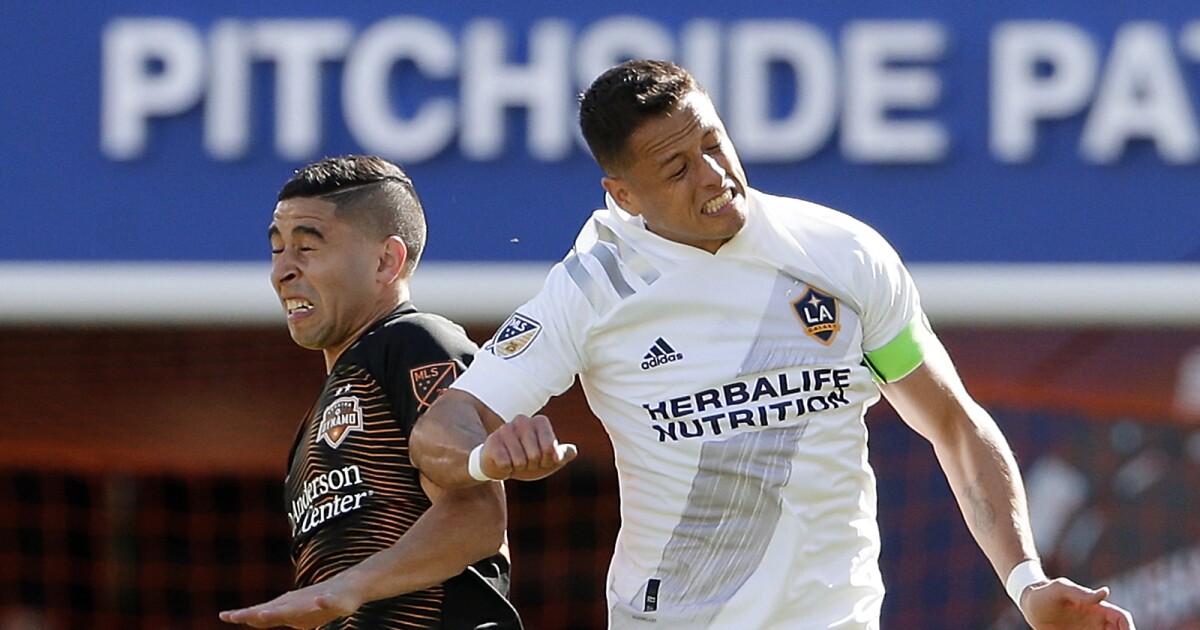 A crowd gathered on a side street outside BBVA Stadium early Saturday afternoon, hoping to catch a glimpse of Javier “Chicharito” Hernández, the Galaxy’s latest marquee star, as the team filed off the bus before its MLS season opener with the Houston Dynamo.

That didn’t happen, with the bus disappearing into the stadium’s loading dock behind a gate that was quickly pulled tight.

A little more than an hour later, the game started and Hernández disappeared again, managing just one weak shot and a team-low 32 touches in his MLS debut, which ended in a 1-1 draw.

Hernández chalked that up to beginner’s luck — which in his case was mostly bad.

“It’s my first official game in this league. I don’t want to use that as an excuse, but I have to adapt myself to this league, to my teammates,” he said. “Always the first game in the season is a little bit like a hangover of the preseason.”

And once the hangover clears, everything gets better — something Hernández is confident will happen.

The Galaxy started pretty well Saturday. With defender Emiliano Insúa bending in crosses from the left side, the team targeted Hernández every time it pushed into the Houston end. Most of those passes went over, behind and around their intended target, although Aleksandar Katai got on the end of one of them, sending a header off the post in the second minute.

“We made six or seven really good crosses,” coach Guillermo Barros Schelotto said. “None of them found Chicharito.”

Highlights from the Galaxy’s 1-1 season-opening draw against the host Houston Dynamo on Saturday.

Eight minutes later, Hernández did get a chance, but his left-footed shot from the top of box was well wide. His only other dangerous moment came late in the game when his pass from the end line found Sebastian Lletget in the center of the box, but Lletget’s shot was punched clear by Houston keeper Mario Maric.

Instead, the Galaxy’s only goal came from Cristian Pavón in the 13th minute. And as good as the goal was, it wouldn’t have happened without goalkeeper David Bingham alertly looking up to find Pavón racing up the left wing with nothing but space in front of him.

Bingham’s long goal kick, which covered more than 50 yards, landed on the outside of Pavón’s right foot, and the Argentine carried the ball deep into the Houston end, then dribbled across the top of the box before drilling a right-footed strike into the top corner near the far post.

The goal was Pavón’s fourth in 12 regular-season games, while the scoresheet showed the assist was the second of Bingham’s 10-year MLS career — a mistake he quickly corrected.

“Third career assist,” he said. “There’s not that many of them to remember.”

The goal didn’t give the Galaxy momentum, though, and they didn’t put another shot on target until Lletget’s chip in the 74th minute.

“The worst thing that happened to us was scoring,” said Hernández, whose 12 passes Saturday were the second lowest of any starter. “After that, we let them play, we let them build their confidence. The game [became] very equal.”

The Dynamo goal came as the result of a defensive mistake 11 minutes into the second half, with Zarek Valentin splitting Insúa and Giancarlo Gonzalez with a pass that sent Mauro Manotas in alone on Bingham. When the keeper slid to his left to protect the near post, Manotas sent a right-footed shot across his body into the center of the net to tie the game.

However, the Galaxy did leave Texas with a welcome consolation prize: their first point in Houston in three seasons.

“Any time you go on the road, it’s hard in this league. This is definitely a hard place to play,” Bingham said. “So coming out of here with a point is a positive.”