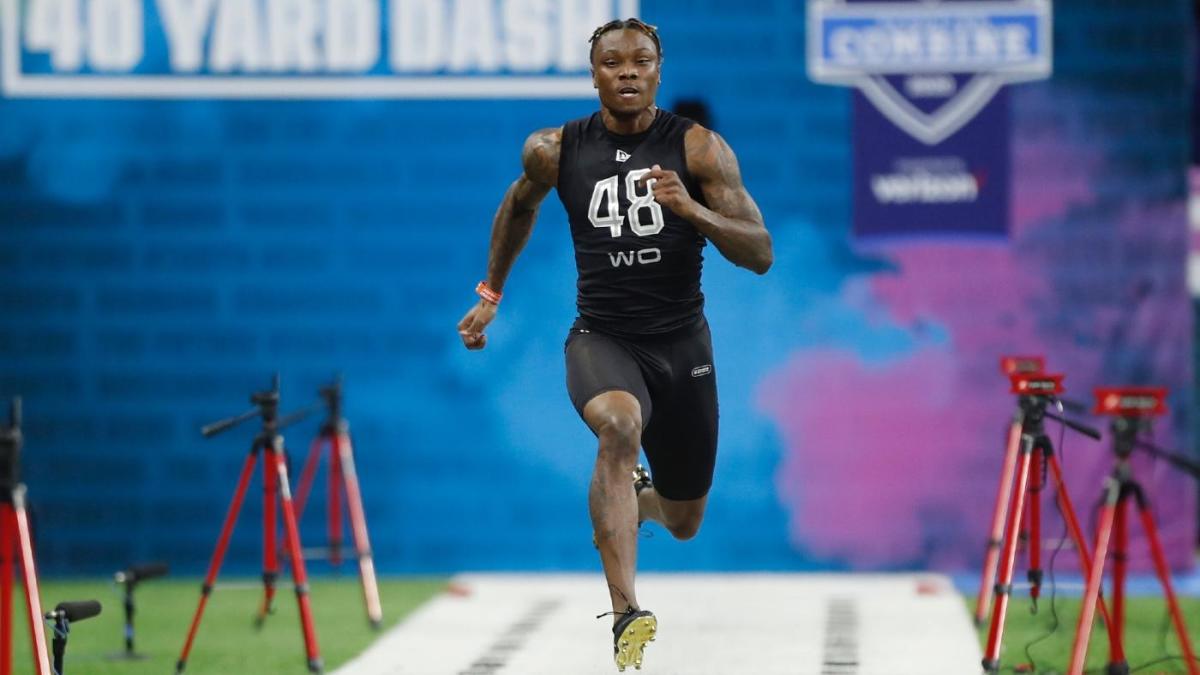 This week, 337 players from 101 schools are descending upon Indianapolis for the 2020 NFL Combine. Each of these players will look to improve their draft stock while possibly finding their future NFL team in the process.

On Thursday, 20 tight ends, 17 quarterbacks and 55 receivers will take part in on-field drills. On Friday, a dozen special teams players, 30 running backs and 52 offensive linemen will participate in on-field drills. The 36 linebackers and 26 defensive linemen taking part in the combine will get their change at on-field work on Saturday. On Sunday, the final day of the draft, the 61 defensive backs partaking in the Combine will get their on-field work.

The winner of the weigh-in, according to CBS Sports draft analyst Chris Trapasso, was Love, whose “gigantic hands” and sturdy frame should help improve his draft stock.

The big winner here, according to CBS Sports draft analyst Josh Edwards, was Akers, who is looking to prove that he can be a three-down back at the next level. Another thing of note with regard to the running backs is Dobbins admitting that he is still not 100% after playing through a high ankle sprain during the Buckeyes’ Fiesta Bowl loss to Clemson.

Phillips turned in an impressive performance in the bench press. That should help improve his draft stock, as Phillips is currently tabbed by CBS Sports as the 260th best player in this year’s draft.

CBS Sports draft analyst Josh Edwards tabbed Aiyuk as a big winner here, as the small but speedy receiver put up an impressive wingspan. Aiyuk is looking to improve his draft stock after a groin injury held him out of the Senior Bowl.

Ruggs was disappointed after clocking 40 times of 4.27 and 4.31, and he’ll look to improve upon those times at Alabama’s pro day, provided the quad injury he was nursing after his runs doesn’t keep him sidelined. Coutler, who made the board with this 4.45, also impressed during his on field work. Claypool also helped his draft stock with his solid 40 time and on field work.

Claypool is the only receiver to rank in the top 10 in bench reps and in the 40 times. Cephus should have improved his draft stock on Thursday night after leaving Wisconsin with a 16.1 yards per reception average.

Kmet, who has drawn comparisons to Rob Gronkowski, strengthened those comparisons with his solid combine measurements. Breeland, who looks a little small on film, also helped his draft stock after tipping the scales at over 250 pounds.

Hopkins, one of the top rated tight ends in the draft, helped his draft stock on Thursday following his 40 run and on-field work. Okwuegbunam also had a big night while turning heads with 40 time and on-field workout.

Hunter Bryant and Pinkney tied for second in the bench press drill, but the next day it was Bryant who looked better as a receiver running drills. He may be able to emerge as the No. 2 tight end in a crowded second tier behind Kmet.

Wirfs and Thomas, two of the highest-rated linemen in the draft, did nothing to hurt their status after getting measured at the combine. One lineman that specifically raised his draft stock was Biadasz, who, according to CBS Sports draft analyst Chris Trapasso, is “one of the most physically impressive (linemen) at over 6-3 and 314 pounds with a wingspan just under 80 inches.”

Trapasso stated that Davidson’s impressive measurements should help his odds at successfully moving from a DE to a DT at the next level. Trapasso also noted that Epenesa’s measurements were better than Chase Young’s and similar to the measurements Myles Garrett put up in 2017.

Davis-Gaither and Harrison, the fifth and seventh rated linebacker prospects according to CBS Sports, likely improved their draft stock with their impressive combine measurements.

Okudah headed into the combine as the top cornerback in CBS Sports’ prospect rankings, and according to Chris Trapasso he had a weigh-in for the ages.