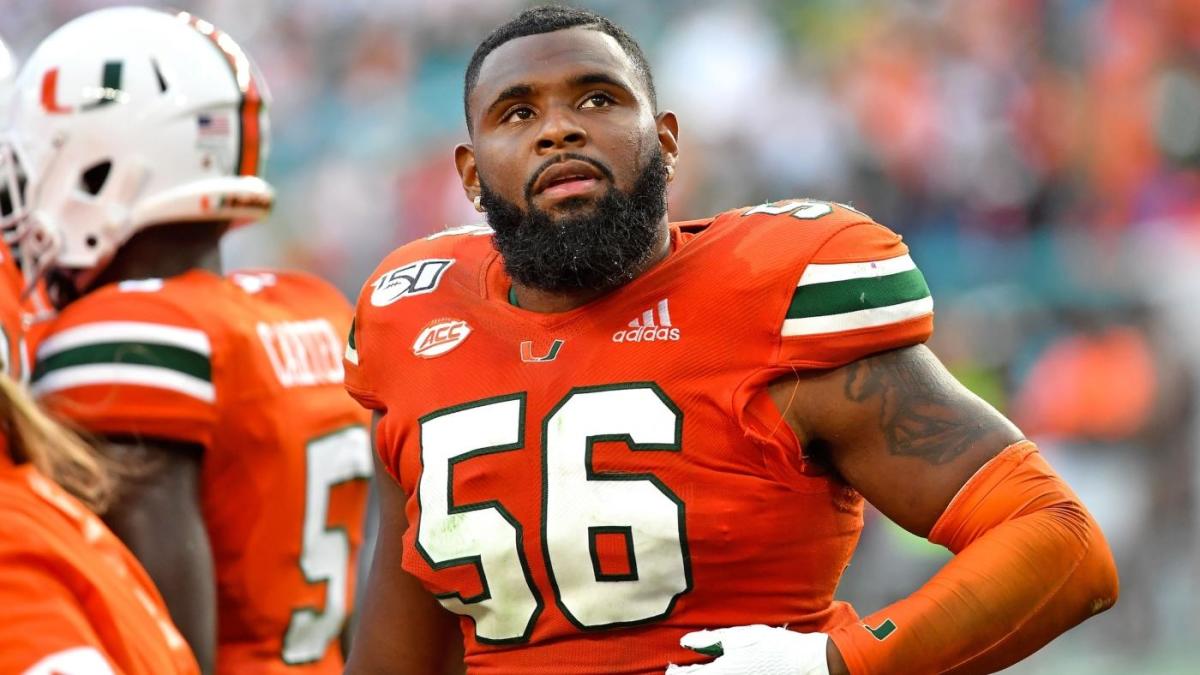 University of Miami standout Michael Pinckney was one of the more productive linebackers in the country the past two seasons, racking up tackles and heavy hits, and earning the respect of coaches and teammates for his tenacious work ethic and magnetic personality as a four-year starter. And it turns out for nearly half of that time he was playing through a significant hip injury that he refused to let slow him down.

So you might think that Pinckney would be down and depressed having recently found out that hip problem was in fact a torn labrum, an injury that will require surgery next month and will strip him of the opportunity to work out for teams at the combine this week. But it did not. The gregarious and positive young man, who started his own lawn service company at age 15, is choosing to find the positive amid the shocking development and will still head to Indianapolis on Tuesday to meet with teams and participate in interviews, knowing it will be months before he can get back on the football field and train.

“Even in these kinds of situations, there’s always a positive you can take out of it,” Pinckney said. “You just have to find it.”

For Pinckney that positive comes from the fact that he finally knows that a hip condition that had been nagging and aggravating him since late in his junior season is about to be behind him once and for all. The timing is hardly ideal — he played through the torn labrum at the East-West Shrine Game — and a part of him wanted to go through with full workouts at the combine despite the condition, but he and his representatives made the cogent determination to return to Miami after the combine for a final meeting with a hip specialist ahead of corrective surgery.

“I wasn’t aware it was going to be something like this,” Pinckney told me. “It came as a total shock. I’ve been feeling it for a while, but it’s never been this excruciating; it just kind of bothered me and slowed me down. There’s a difference between playing in pain and getting through it, and then actually performing a certain way and trying to get a certain time in a sprint or a drill. I’ve been feeling this for like two years — it’s crazy to me in some ways because two years is a long time to have something like that — but for me to be able to be on draft boards despite that, I still feel like that’s a blessing that I could still compete at a high level.”

Pinckney, projected as a mid-round pick, managed to rack up 285 career tackles, and post 14.5 sacks and three interceptions in his college career. According to PFF, he missed just five tackles. He was a Freshman All American and earned All-ACC honors all four years on campus. He boosted his stock by showing up all over the field in the Shrine Game, doing do despite having just found out the results of an MRI revealing the scope of his injury.

“I still went out and had a hell of a game,” he said. “It’s crazy to me that I’ve been playing with this for so long, and I’ve been able to withstand this type of thing.”

Pinckney plans to be totally forthcoming with the coaches and executives he meets with at the combine, realizing that he won’t be cleared for full contact until well into the regular season. He wants to show teams what he is made of in hopes of still getting drafted or signed as a priority free agent, with the likelihood of going on the second day of the draft quite bleak under these circumstances.

“The plan for right now is for us go to the combine and let all the teams know and make them aware of the situation,” Pinckney said. “And then hopefully we’ll try to get the surgery done in early March. As soon as I leave the combine I’ll go back to Miami and see the specialist. I’ll be down for camp — it’s going to be a six-to-nine month recovery — so I’ll be down for a while but I can’t wait to get started.

“I’m excited to just go to the interviews and board meeting and just kind of tell my story and let these guys know this is the situation. And I really appreciate (agent) Deryk (Gilmore) and my team for actually having a plan set in place and us getting out in front of this thing is good for me long-term, I think.”

The reality for Pinckney is that regardless of where he gets drafted, given his projections, his first opportunity for a real payday would come on his second contract, not his first. He was never going to be looking at a huge bonus anyway, and his spirits remain high despite a surgery looming after his truncated combine is complete.

“Right now I know that I am one of best linebackers in this draft class,” Pinckney said, “and I know for a fact that when I am at full health I’m going to be a better player. So that is exciting to me, and if feel like if you can play, you can play. And teams understand who can play and who can thrive in this league, and I’m just looking for someone to let me in the door.”