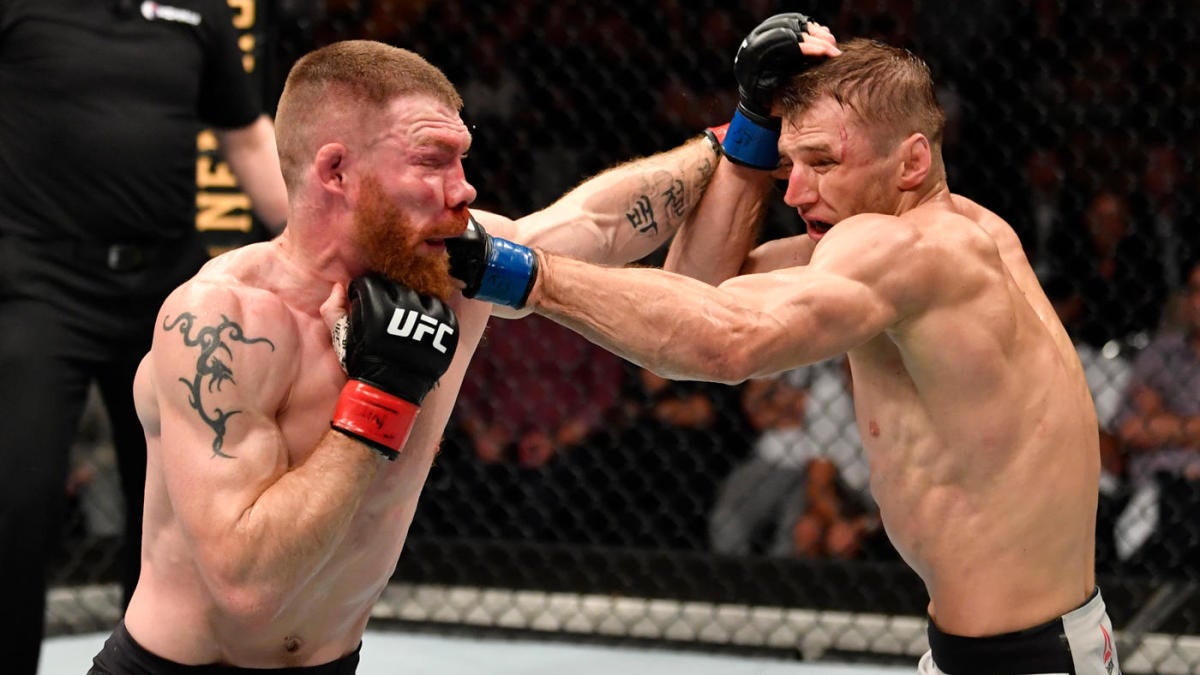 There’s no easy or quick path to a title shot in the UFC’s lightweight division, but Dan Hooker took a step down that road with a thrilling decision win over Paul Felder in the main event of UFC Fight Night 168. The fight was a battle of top 10 fighters in Auckland, New Zealand, Hooker’s home town and the city where he made his UFC debut.

Hooker’s early strategy was focused on drilling Felder’s lead leg with crisp kicks while he circled and used his length. Felder’s strategy was less tactical and more focused on headhunting and whipping power punches while trying to close distance. By the end of Round 1, Felder’s leg was sporting a bruise and his right eye had swollen nearly shut, an easy visual indicator of which man’s gameplan had been more effective through the opening five minutes.

Can’t get enough UFC? Subscribe to our podcast State of Combat with Brian Campbell where we break down everything you need to know in the Octagon, including a breakdown of UFC Auckland with “Suga” Rashad Evans.

Fights, especially five round main events, aren’t won in the first round, though. And Felder made adjustments moving forward, incorporating more leg kicks of his own and finding ways to draw Hooker into a brawl more often. Hooker’s jaw began to swell, possibly a result of a broken jaw or the accumulated damage from the power punches of Felder that landed with an increased frequency.

Duke Rufus, Felder’s trainer, implored him before the fourth and fifth round to step up his pace while telling the fighter to win the fight for his daughter. Those final two rounds may have been the best of the fight for Felder, but Hooker remained competitive, battling nearly shot-for-shot in a wildly competitive fight.

With the fight possibly on the line in the final moments, Felder landed a cracking punch but Hooker responded with a takedown, the first of the fight and maybe the most important of his career. After the final bell, the scorecards read 48-47, 47-48 and 48-47, giving Hooker the split decision victory. At the end of the fight, Felder held a slim 133-119 edge in significant strikes landed through the 25-minute fight.

The loss was a heartbreaking one for Felder, who suggested he may retire from active competition.

“i knew it was close,” Felder said. “I feel like I hurt him a lot in the fight. But he got the takedown he was smart. He busted me up pretty good. That might be it for me. Man, I got a four-year-old at home that misses me every time I go away like this. Congratulations to Dan. I knew this was exactly what I was in for when I came here to New Zealand. I pissed this guy off. … It was an absolute honor to come in and share the Octagon.”

Hooker, meanwhile, is looking to continuing his impressive run by using his post-fight interview to call out a fellow top contender.

“I’ve got my eye on someone,” Hooker said. “I want the battle of the highlight reel. I want Justin Gaethje next.”