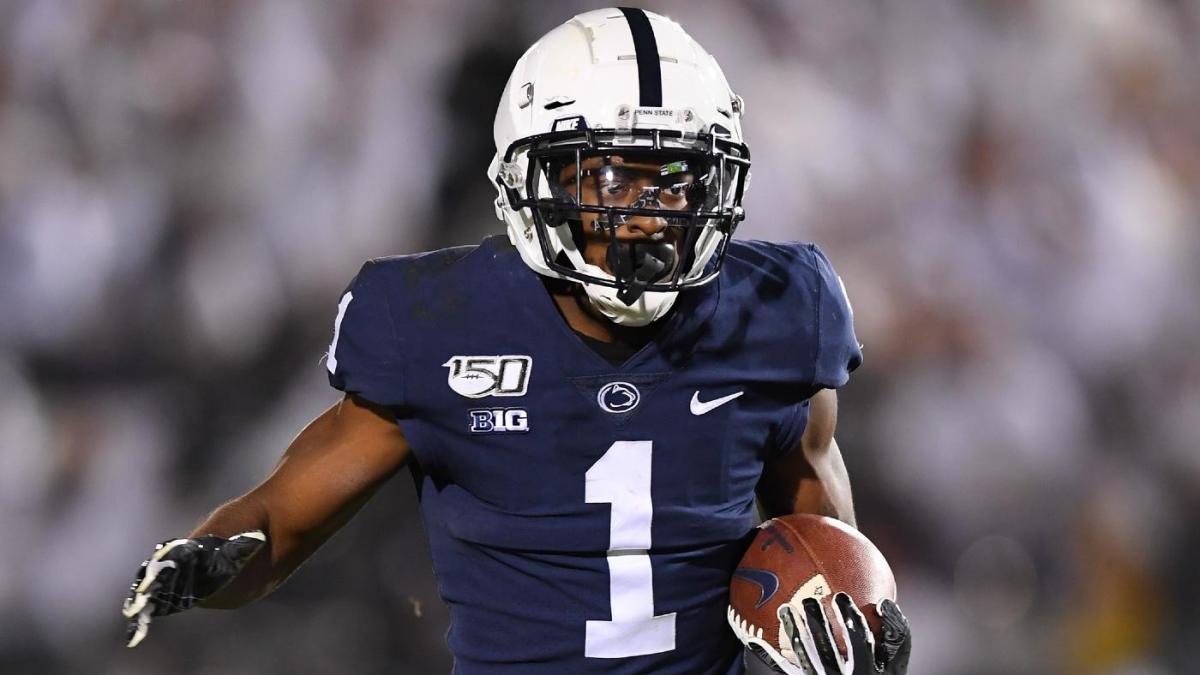 The Steelers have a rich history at the receiver position. From Elbie Nickel in the late 1940s and ’50s to John Stllworth and Lynn Swann in the ’70s to Louis Lipps in the ’80s to Yancey Thigpen in the ’90s to Hines Ward and Plaxico Burress in the 2000s, the Steelers have seldom been without a star receiver over the past 70-plus years.

Kevin Colbert, the Steelers’ general manager who joined the club’s front office in 2000, has had more success than anyone drafting the receiver position over the past two decades. Over that span, Colbert and the Steelers have selected Burress (2000), Antwaan Randle El (2002), Santonio Holmes (2006), Mike Wallace (2009), Emmanuel Sanders (2010), Antonio Brown (2010), Martavis Bryant (2014), and JuJu Smith-Schuster (2017). In 2018, Colbert selected James Washington, who last season led the Steelers in receiving following a disappointing rookie season. Last spring, the Steelers selected Diontae Johnson, who earned All-Pro honors for his success as a punt returner.

Colbert, who signed a one-year extension earlier this month, and the Steelers are expected to add another receiver to the team’s roster via the draft in 2020.

While they look at many things when evaluating the receiver position, one thing Colbert has specifically mentioned in the past is a receiver’s yard per catch average. Colbert and the Steelers like players that have shown the ability to make big plays, with the hope they can continue doing it at the next level. The Steelers also put an emphasis on touchdown receptions and whether or not the receiver also made significant contributions on special teams during their college career.

Here’s a look at the receiving averages, touchdowns and special teams contributions from the notable receivers Colbert and the Steelers have drafted since 2000.

It’s worth noting that Randle El, like Kordell Stewart a decade earlier, played quarterback in college before switching positions upon joining the Steelers. Another thing worth noting is the fact that Brown, who ended up becoming the most productive of the players listed above, had the lowest yards per reception average during his college career. Brown did display his big play ability on special teams, averaging 15.5 yards per punt return (with three touchdowns) and running back two kickoffs for scores during his time with the Chippewas. Speaking of special teams, Burress and Randle El were the only receivers on this list that did not make any type of contribution as either a punt or kickoff returner in college.

Based on their history, there are several receivers the Steelers will likely have their eyes on over the next two months, when Colbert, head coach Mike Tomlin and the rest of the team’s scouting department heads to the NFL combine in Indianapolis, then prospective pro days leading up to the draft. While they have other needs, no one should be surprised if the Steelers take a wideout with one of their first three picks in this year’s draft, starting with the 50th overall pick.

There’s a greater chance that the Steelers wait another round before adding to their receiving corps during the draft. If they do, a key option could be Minnesota’s Tyler Johnson, a 6-foot-2, 205-pound target who spent four years with the Gophers while eventually becoming one of the Big Ten’s best offensive weapons. Over the past two seasons, Johnson caught 164 passes for 2,487 yards and 25 touchdowns while averaging 15.2 yards per catch. Johnson, who helped the Golden Gophers go 11-2 in 2019, made a slew of big plays last season that included his 38-yard touchdown catch in Minnesota’s 31-26 home win over Hamler’s Nittany Lions.

Two later-round options for the Steelers could include Wisconsin’s Quintez Cephus and Washington’s Aaron Fuller. Cephus, who checks in at 6-foot-1 and 207 pounds, averaged 16.1 yards per catch during his three seasons with the Badgers. While Fuller’s 12.9 yards per catch average is considerably lower than Cephus’ average, he caught just as many touchdown passes despite his smaller build at 5-foot-11 and 188 pounds while also serving as a productive punt returner during his time with the Huskies.

An educated assumption is that the Steelers are looking to find a bigger, more physical receiver that could help take some of the attention off Smith-Schuster, the Steelers’ biggest receiver at 6-foot-1 and 215 pounds. With this in mind, a possible option could be Notre Dame’s Chase Claypool, who should be available when the Steelers are on the clock in the third round. During his time with the Irish, Claypool, who stands at 6-foot-4 and 229 pounds, caught 19 touchdowns while averaging 14.4 yards per catch. Claypool enjoyed a breakout season in 2019, catching 13 touchdowns while averaging 15.7 yards per catch.

While they may be looking for a big wideout, the Steelers, as they have shown over the years, will draft whoever they think is the best receiver for them, regardless of how big they are. Pittsburgh also puts a lot of stock into their pre-draft meetings with all of their prospects, a part of the pre-draft process that will play itself out over the coming months.

The Steelers’ template for finding future star receivers has worked well for them in the past. Colbert and company are surely hoping that it works again in 2020.