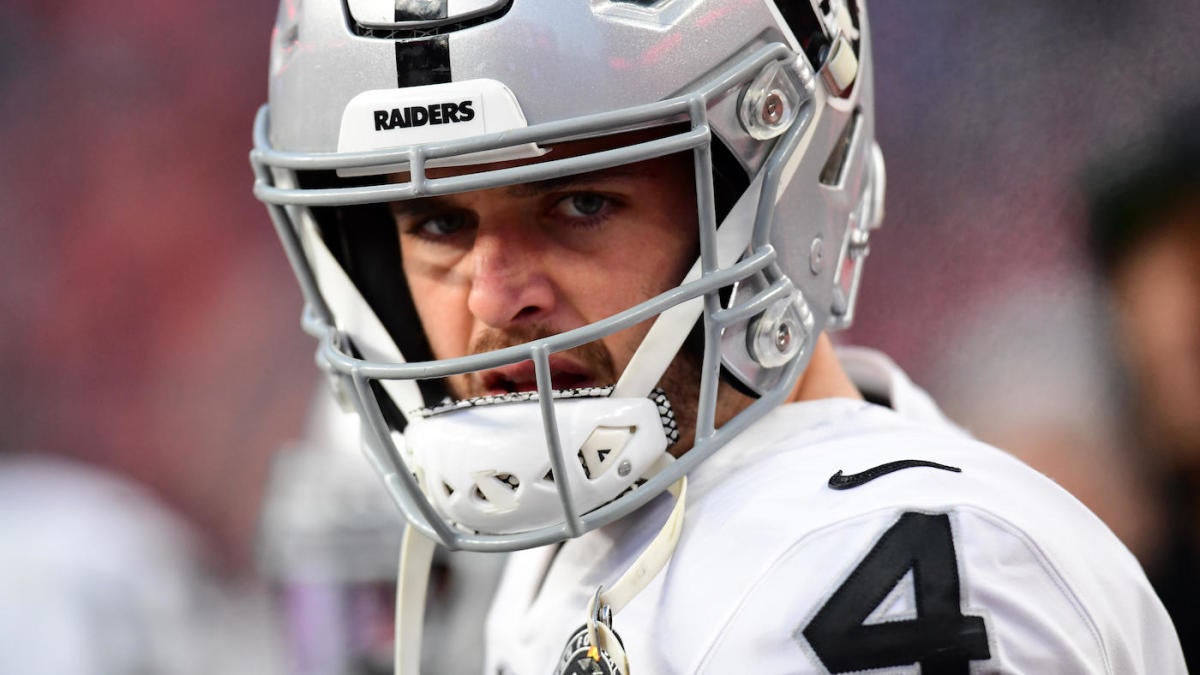 It’s a fresh new start for the Raiders as they leave Oakland and head east to set up shop in Las Vegas for 2020. As the movers arrive and the team says its goodbyes to the Bay Area, they do so with tornado of questions surrounding who’ll be their starting quarterback come September. After all, Derek Carr was relentlessly booed out of the stadium in the team’s final game in Oakland — as fans also made their angst clear by heaving trash onto the field — and it’s definitely not his first rough patch with supporters of the club.

As the team moves to a new city, they have to decide what to do with their current franchise quarterback, and if they decide to move on, there are then other tough calls that will shape the offseason not just for Las Vegas, but for the entire league.

Pondering if Carr is the answer at quarterback has become a perennial item of interest for the Raiders, but head coach Jon Gruden hasn’t been shy about doubling down on his belief in the 28-year-old. The problem is for as much as the three-time Pro Bowler has shown he can be a game-changer, he has more often shown he can be an in-game liability.

Decision No. 1: Carr as franchise QB?

If the answer is yes, Carr is worth sticking with as a franchise QB, then the Raiders are off the table not only as a free agent destination, but a potential landing spot for a QB prospect in the first round. Before we barrel toward the latter point at 100 mph, we must first flesh out the consideration that maybe, just maybe, Carr should remain in his current seat.

Because let’s be honest here: You’ve seen worse stat lines than what Carr put up in 2019.

His 4,054 passing yards were the most of his six-year NFL career, and while you’d like to see him throw more than 21 touchdowns in 16 games, he had only eight interceptions, and some missed opportunities were easily attributable to the lack of a top-flight receiver who could blow the lid off of an opposing defense. Once the Antonio Brown project met its toxic conclusion, the best target on the field ended up being tight end Darren Waller. And while Waller’s story of redemption deserves a salute, the fact no one else on the roster delivered more than 651 receiving yards is a strong indicator of the state of affairs in the wide receiver room. Tyrell Williams did well with six touchdowns on the year, but if the Raiders want more from Carr, they need to get more from the weapons he’s throwing to.

Carr’s career numbers don’t tell the whole story, but they don’t exactly stink. He’s thrown for 22,793 yards along with 143 touchdowns. This is why Gruden has been hell-bent on publicly backing Carr, and excusing away the 62 career interceptions in the process.

He could be better, but he could also be much worse.

If the Raiders commit to Carr as the franchise QB, then you can remove them as a potential landing spot for the other chess pieces on the board. And that could cause a squeeze in a market where there may end up more starting candidates than open jobs.

If, however, they decide to move on …

Decision No. 2: Make a splash in free agency?

“C’mon, man, when’s it going to end?” Carr said to ESPN in January about offseason rumors.

Unfortunately for Carr, not anytime soon.

With six-time Super Bowl winning quarterback Tom Brady mulling an NFL future that could reportedly include a rabid interest from the Raiders, it’s all Carr can do to remain calm during the latest round of speculation about his stance with the team. Gruden has long been a fan of Brady, and nothing would take the Las Vegas relocation hype through the stratosphere like also adding arguably the best quarterback in NFL history to the roster. Brady has never once played for another NFL team, and while there’s still a very real chance he won’t, there’s also a chance he’ll get an offer he can’t refuse.

If there’s any organization poised to slide a seemingly blank check in front of him, it’s the Raiders.

Also, who’s to say Brady would improve the Raiders over Carr? It sounds great from a romantic football standpoint, but Brady himself struggled in 2019 when also lacking receiving weapons, like Carr. That hints at an aging Brady no longer being able to turn receivers into superstars, and instead needed superstars already present on the roster or — at minimum — on the way, but that same logic could be used as an argument to retain Carr. Interestingly enough, and to that point, some futures simulations have the Raiders as better with Carr instead of Brady, per SportsLine. So while adding Brady might make them better, it also might not.

And even if Brady ultimately returns to the Patriots, there are plenty of other players the team could target to make a splash at quarterback. Scratch former Super Bowl MVP Drew Brees from the list, as he figures to return to New Orleans or retire, and longtime Raiders nemesis Philip Rivers would seemingly not be a great fit when considering both his rash of turnovers last season with the fact he’s already relocated his family once this offseason.

What about Ryan Tannehill, who is expected to remain with the Titans but could possibly be wooed away with more money? And if the Raiders truly want to make a splash, would they consider swinging a trade for a Cam Newton or Andy Dalton? Both are a bit cheaper than Carr this coming season, and Newton has a league MVP under his belt. If he’s healthy and the Panthers are looking to move on, the only question then would be cost. There are more curious options such as Jameis Winston, or maybe giving Teddy Bridgewater another chance at proving he’s an NFL starter, and for pennies on the dollar.

In an NFL offseason filled to the brim with potential options at franchise QB, the seat beneath Carr has never been hotter. But even if the Raiders don’t bring in a new starting QB, Carr’s job isn’t necessarily safe …

Strike through Joe Burrow’s name here, because it’s not going to happen.

More likely of an April scenario would be the Raiders retaining Carr and drafting his successor with the expectation of sitting the rookie for at least one season before unveiling him as the future of the franchise. This requires patience though, but we’re also talking about the organization that allowed Brown every possible opportunity to take a snap for them, so it’s obvious Gruden and general manager Mike Mayock have that virtue in spades if they believe in someone. As it stands, they appear to still believe in Carr, so such a draft strategy could be viable in 2020.

Would Carr be amicable to such a thing, though? Knowing he’s essentially being pushed out the door? It’s not as if he’d have much of a choice, because while he could demand a trade, the Raiders don’t have to grant him one. It also wouldn’t be easy to convince another club to take on an $18.9 million salary in 2020 for a quarterback the Raiders themselves have questions about.

Of the three options listed here, this feels like the more logical one, albeit not the most headline-grabby. The reality is the Raiders are likely not going to allow Carr to play out his current contract that hits their salary cap for more than $63 million over the next three seasons. His resume simply doesn’t justify it, which puts them in the uncomfortable position of having to decide here and now if Carr is their guy for at least the next three seasons.

No matter how much they publicly back him, they privately know there’s a decision to be made.

And so it goes, that as much as Carr would like to believe the Raiders would not cut him loose this offseason, the reality is they very well could. As far as the rumors surrounding Brady go, well, if the Raiders were willing to offer big money to Brady — releasing Carr would go a long way in simply sliding millions of dollars toward that goal. The team can save $13.6 million in 2020 if they let him walk, as he approaches the aforementioned back end of his contract.

Even without factoring Brady into the equation though, the questions above still loom large in what will be the most pivotal offseason the Raiders have experienced in a long, long time. And whatever decision is made, the ripple effects will be felt around the league, by opening up Vegas for business when it comes to QBs on the market, or by making the team a QB mover and shaker in the first round in the draft, or by simply not being an option for either.