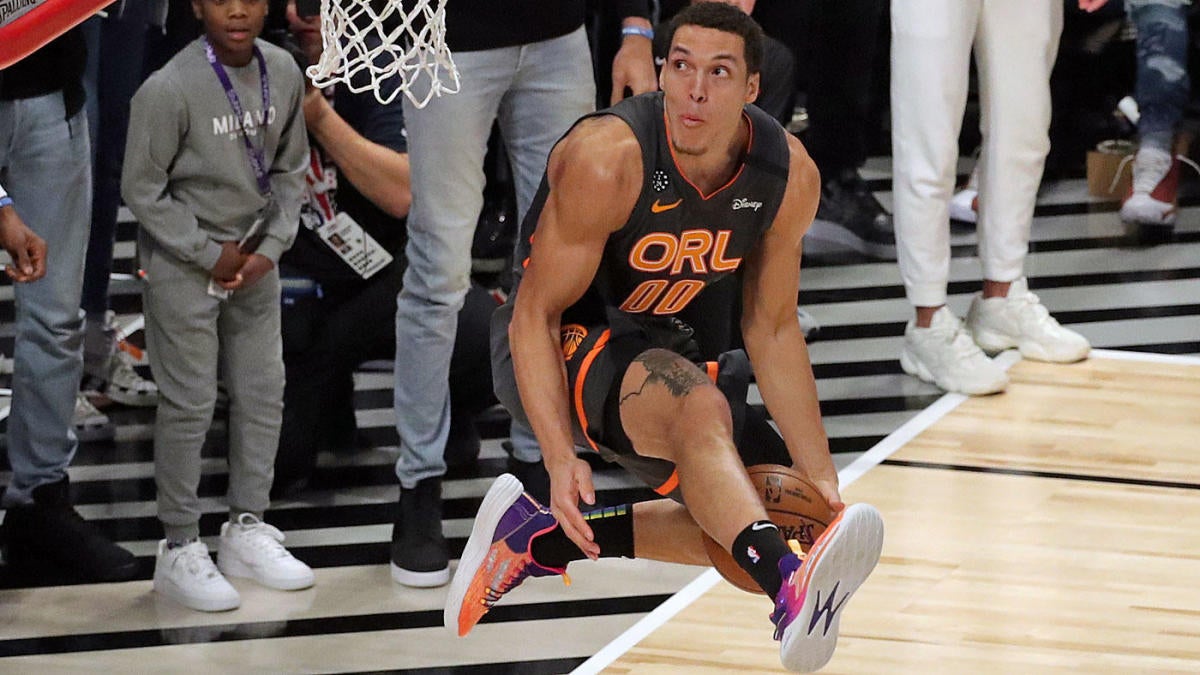 On All-Star Saturday night in Chicago, Derrick Jones Jr. of the Miami Heat edged Orlando’s Aaron Gordon by a single point in one of the most electric, and controversial, Slam Dunk Contests in history. Gordon, after recording five straight perfect scores, closed the contest by dunking over 7-foot-5 Tacko Fall, but somehow still fell short.

Jones Jr. was phenomenal in his own right, and he’s an exceedingly worthy champion. He and Gordon put on a wild show. And there was at least one big-time dunk from someone other than Jones Jr. and Gordon. Dwight Howard also competed, and we’ll leave his contributions at that.

Without rambling anymore, here’s a ranking of the best dunks from Saturday night.

1. Gordon off side of backboard, 360 windmill

On a night full of spectacular dunks, this, to me, was the one that truly blew everyone away. There is so much to this dunk. It’s not the first time we’ve seen someone go off the side of the backboard, but to catch it from well outside the restricted area and execute not just a 360, but a full windmill 360, is incredible. Throw in the fact that he was blind most of the time he was in the air on this dunk, meaning he had to pick up the rim, lose it, then relocate it at the last second, and that’s another layer of difficulty. And finally to finish it with this kind of power after all those moving parts? Nothing topped this on Saturday night.

2. Jones Jr. off glass, through the legs and over a grown man

Again, a multi-layered dunk. First he catches it off the backboard. Then he puts it through his legs. All while jumping over an adult-sized male (not Chance the Rapper). Taken on their own, none of these maneuvers is extraordinary. But to put them all together is some kind of feat, and that’s to say nothing of the power with which he did so.

Putting it through his legs after the catch is the most impressive part of this dunk, because we’ve seen guys do this while someone is holding the ball in place, but in that case you can push the guy’s head and shoulders down a little bit to clear room to put the ball through your own legs (as Gordon had done earlier in the contest). Off the catch, Jones Jr. had to clear the guy’s head by enough to put the ball through cleanly. If you look at it in slow motion, even though the guy clearly dips his own head, you can easily see how much room Jones Jr. has to spare.

OK, so he was a half step inside the free-throw line. Sue me. Think about this: Two of the most iconic dunks in history are Michael Jordan’s free-throw takeoff (he was also a step inside the line) and Dominique Wilkins’ windmill. Jones Jr. combined them. Jones Jr. only got a 48 for this dunk, which was its own kind of robbery. It was a better final dunk, in my opinion, than Gordon going over Tacko Fall, even though I think Gordon narrowly deserved the title.

This one got lost because it was Gordon’s first dunk of the night, but a couple things I love about this are the fact that the through-the-legs thing got a little redundant by the end, and this was the first one that really got people out of their seats. Also, look at the way Gordon goes backwards through his legs, meaning from his strong hand to his weak hand. Most of the time guys go the other way around so the ball ends up in their strong hand for the finish, but Gordon brought it through from right to left, and then after all that, he basically did Dominique Wilkins’ double-clutch between the legs reverse dunk to finish the action. Amazing.

Look, there’s some gray area here. Taco hunched down a little. Gordon propelled himself up a tad by pushing down on the ball. But at the end of the day, he cleared a 7-foot-5 dude. Give the man his props. And his title.

So here’s the first thing: Most 360 dunks aren’t quite full 360s. Most of the time guys start their rotation before they actually leave the ground. So Gordon turning a full 180 degrees on this dunk is closer to the “360” dunks we over-glorify, and besides that, he’s again having to relocate the rim with his back to the basket. Also, he rotates clockwise. For a right-handed player, it is far more natural to rotate counter clockwise so you end up rotating back into a straight-on position. Gordon rotating against his body was why he had to reach back at the end. The little things about this dunk make it hugely impressive.

7. Jones Jr. off side of backboard, through the legs

This one got a lot of love, and rightfully so. But we’ve seen that Jones Jr., and a lot of other dunkers, can go through the legs. As I said at the top, that trick got a little played out. That he got it off the side of the backboard makes for a nice twist but doesn’t really make the dunk that much more difficult, relatively speaking. Still, crazy athletic stuff we’re talking about here.

I’m going to give one dunk from someone other than Gordon or Jones Jr. some love. Connaughton and Dwight Howard didn’t belong in the same building as Gordon and Jones Jr., but this was a pretty nice dunk. He gets the double clutch down between the legs, and then he gets it back up quick enough to touch the backboard with the ball before slamming it through. Certainly nothing Gordon or Jones Jr. couldn’t have done in their sleep. He got a 45 for the dunk. Seems about right.