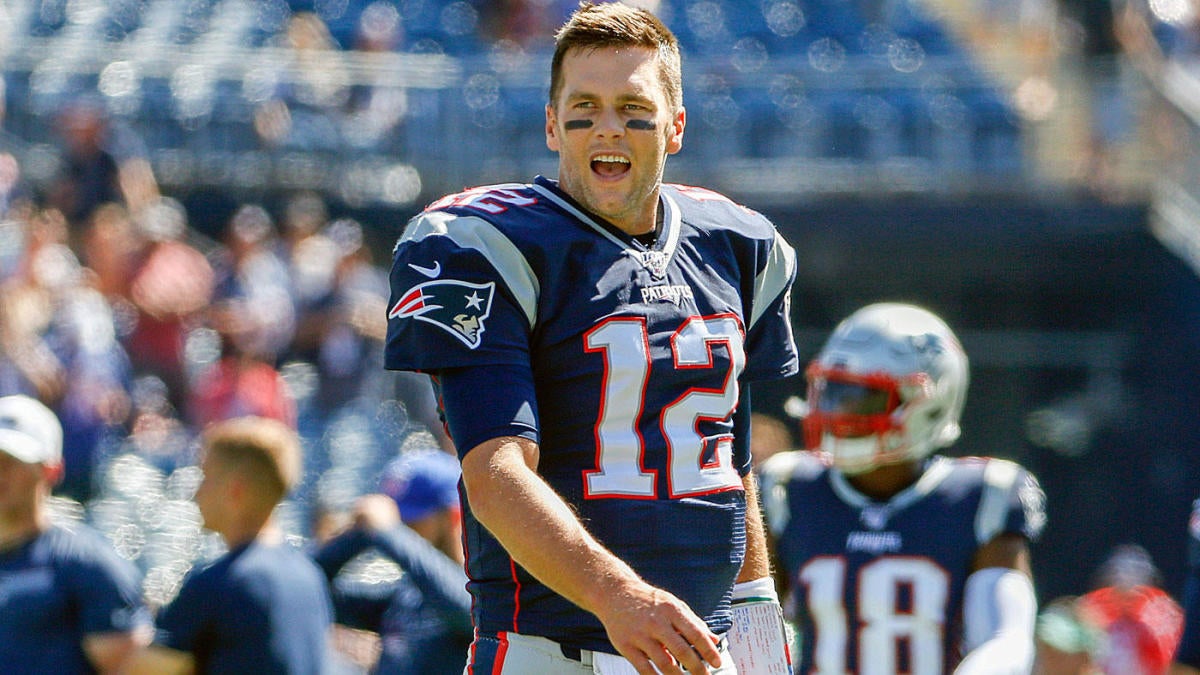 It’s the question that everyone in the NFL asking: Where will Tom Brady play in 2020? If we’re being honest, it looks like nobody — not even TB12 himself — has their thumb on exactly what the six-time Super Bowl champion quarterback will do once he hits unrestricted free agency for the first time in his career. Even if he does know, Brady doesn’t seem to keen on telling us one way or another. After all, he was pretty mum on the subject during a recent Instagram Q&A with his TB12 Sports Therapy fans.

You didn’t think it was going to be that easy, did ya?

As Brady keeps his cards close to his jersey, we can look at the landscape of teams that could be in the market for Brady’s services this offseason. You can see below that we collected up eight teams — some long shots, some not so much — that could kick the tires on Brady this offseason and try to bring him to town. Yes, the Patriots are on this list, but they’re not as much of a lock as many New Englanders are hoping they will be. He could obviously return to the only team he’s known in his NFL life, but there are also a number of other clubs that can make compelling cases.

The Raiders are one of the teams that have generated the most buzz surrounding Tom Brady’s free agent status and there have been a number of reports saying that they’re going to make a legit run at him. The fact that the six-time Super Bowl champion was seen yucking it up with owner Mark Davis prior to a UFC event only added more gasoline to this speculation. Given that the Raiders are about to step into their new home in Las Vegas, it makes sense that they’d want to make a splash by bringing in Brady.

They rank just outside the top-10 in the league in projected cap space, but Oakland can clear an additional $13.6 million if they cut current starting quarterback Derek Carr. That amount of dough would not only be enough to help get Brady in Sin City, but provide help elsewhere around the roster. Offensively, Waller, Jacobs and Renfrow would be fantastic weapons for Brady, but that defense does need some work.

The two big questions for Brady landing in Vegas is head coach Jon Gruden’s willingness to allow his potential new quarterback to install his offense with the Raiders and simply the competition in the AFC West. For years, Brady has enjoyed the luxury of the AFC East where the Jets, Dolphins, and Bills have struggled to put together a consistent threat to the Patriots. If he were to join the Raiders, he’d have to face the reigning Super Bowl champion Chiefs and Patrick Mahomes twice a year, which isn’t exactly the easiest path to the playoffs.

The Colts are a very interesting suitor for Brady. They have the second-most cap space in the entire NFL, they’re a well-coached team, they boast a number of solid weapons, and most importantly they have the best offensive line of the bunch on this list by a wide margin. According to Pro Football Focus, this 2019 Colts offensive line ranked third in the league. Indy needs to figure out what starting left tackle Anthony Castonzo’s future holds, but Brady would be well protected with the Colts.

T.Y. Hilton would also be one of the better deep threats Brady has seen in his career and he could certainly increase the production of Jack Doyle as well. Not only that, but the Colts have enough cap space to bring in Brady and sure up other holes on the roster.

Indianapolis seems ready and willing to upgrade the quarterback position in 2020, but would Brady really want to play in the house that his longtime rival Peyton Manning built?

I probably have the Chargers a little lower than most expect. After all, they seem like the favorites to land Brady if he doesn’t re-sign with the Patriots. For Los Angeles, they should move heaven and earth to try and pry Brady away from Foxborough. They’re about to move into a new stadium and have garnered next to no buzz as the Los Angeles Rams have seemingly stolen the hearts of the city. By bringing in the star power that Brady holds, it would do wonders for the Chargers to generate a core group of fans.

Austin Ekeler (restricted free agent) would be a phenomenal weapon for Brady out of the backfield and, as long as they re-sign tight end Hunter Henry, the Chargers have enough weapons that Brady could contend with. On the defensive side of the ball, Brady would have the likes of Joey Bosa and Melvin Ingram to complement his offense.

Choosing the Chargers could also be a business decision for Brady as it relates to his TB12 brand. If he wants to push his recovery and training methods into a new market, Los Angeles would be quite an attractive landing spot.

Similar to the Raiders, however, Brady would have to face the Chiefs twice a year and fight them for the AFC West title, which puts the Chargers down a few pegs.

The New England Patriots will get their crack at trying to keep Tom Brady, but it won’t be easy. They have to deal with salary cap issues that no other club on this list has to worry about with Brady. If he re-signs prior to the start of the new league year, his $13.5 million cap hit will be split over the next two seasons. So, if the Patriots ink him to a $30 million per year deal prior to that deadline, you’ll have to add an additional $6.75 million. If he signs after that deadline, the entire $13.5 million chunk will be added in 2020.

With that in mind, time is of the essence for New England to talk with Brady about his future. If they can get him to agree to a deal prior to that deadline, they’ll have a much easier time bringing in more weapons for the six-time Super Bowl champ.

As for what’s already on the roster, Brady has his trusted go-to weapon in Julian Edelman along with James White. There’s potential that Mohamed Sanu could be better in 2020 and first-round receiver N’Keal Harry should make a leap in Year two. That said, New England must improve the tight end spot to better their chances of bringing Brady back.

There’s seemingly no question that Robert Kraft and company want Brady for the rest of his football days, but they’ll have to make things a bit more appealing in terms of the roster.

Bet you didn’t expect any AFC East team to be higher than the Patriots on this list. Well, the Dolphins could make a rather strong case to Brady this offseason. Not only do they have enough space to bring him aboard, but they could create quite the offense around him as they own the most cap space in the entire NFL heading into this offseason. They also have three first-round picks that could complement the roster.

DeVante Parker and Mike Gesicki are a great one-two punch for Brady, but the Dolphins would need to improve their offensive line and defense before next season. Given their draft capital and cap space, it’d be rather easy to attack those needs in multiple ways.

There’s also a bit a familiarity for Brady in Miami with Brian Flores, formerly the Patriots de facto defensive coordinator, now the head coach. It’d also be fascinating to see Brady go head-to-head with his former team twice a year.

This seems like a bit of a reach, but if the Titans elect to pass on re-signing free agent Ryan Tannehill as their starter going forward, Brady all of a sudden comes into play here. This Titans team was on the brink of a Super Bowl berth before blowing a 10-point lead to the Chiefs. If you add Brady to this group and re-sign star running back Derrick Henry, Tennessee would not only become the favorite in the AFC South, but also a legitimate Super Bowl threat.

Just ask yourself this: If Brady was on the 2019 Titans, would they have beaten the Chiefs in the AFC Championship? My answer would be yes.

Brady is good friends with Titans head coach Mike Vrabel and Tennessee has been something of a “Foxborough South” in recent years. A short-term deal makes a lot of sense for both sides.

It doesn’t appear like the 49ers are going to get rid of Jimmy Garoppolo, but let’s speculate for a moment. The 49ers have an out in his contract this offseason that would clear $22.4 million off the cap. Throughout this latest run (and eventual defeat) to Super Bowl LIV, there were questions as to how much head coach Kyle Shanahan actually trusts Garoppolo. Considering his play-calling (especially towards the end of the first half of the Super Bowl), things would indicate that he doesn’t fully trust what Jimmy G will bring to the table.

If they did ever decide to let him go, it would be amazing theater to have them sign Tom Brady, who rooted for the 49ers as a boy and is from the Bay Area and try to contend for Super Bowls. Brady would have tremendous weapons like George Kittle along with Deebo Samuel and the San Fran defense was one of the best in the league all year. Brady would also enjoy the benefit of playing behind San Francisco’s above-average offensive line.

Again, this likely isn’t happening, but, as long as it’s even the slightest possibility, it will remain high on this list.

They’ve been dubbed the “sleeping giant” in the Tom Brady sweepstakes, and for good reason. The Bucs arguably have the best group of offensive weapons in Mike Evans and Chris Godwin along with a fast-improving defense following the addition of defensive coordinator Todd Bowles last offseason. If Tampa Bay doesn’t want to pay Jameis Winston an extravagant contract, it’d make sense for the franchise to kick the tires on Brady.

Chris Godwin and Mike Evans would rival the Randy Moss-Wes Welker duo that Brady played with in his record-breaking season in 2007. When you add tight end O.J. Howard into the mix, Brady could put together a pretty special campaign in 2020. Not only would Brady have those weapons at his disposal, but he’d have a stout defense and an offensive line that ranked No. 7 in the NFL, according to PFF. The Bucs also have the third-most cap space in the NFL, so they could address any other weaknesses on the roster.

When you take out the market and any sort of history Brady may have with a given franchise, the Tampa Bay Buccaneers are the most attractive destination. If Brady wants to put up eye-popping numbers and contend for a Super Bowl, this is the spot.