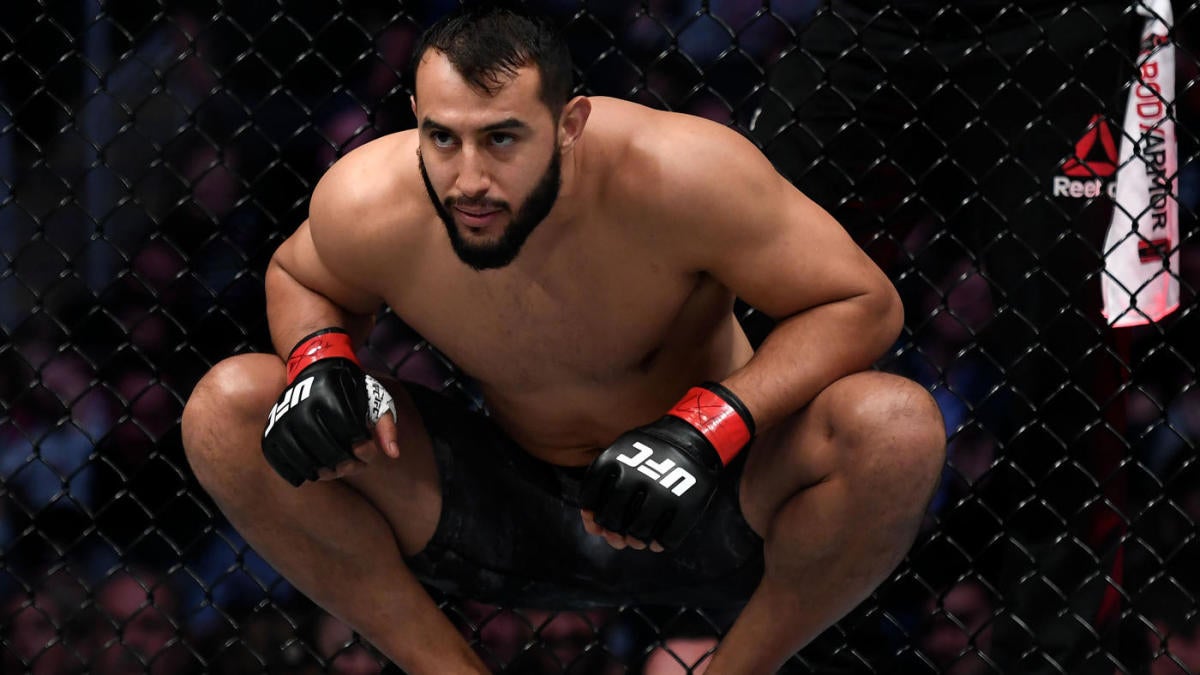 If there’s any kind of moral victory to be gained from the pre-fight build to Saturday’s UFC 247 main event in Houston, unbeaten Dominick Reyes may have come close.

Reyes (12-0), who will challenge for Jon Jones’ UFC light heavyweight title inside Toyota Center, faced off with his future opponent for the first time in December following a press conference in Las Vegas to announce the fight.

“I wasn’t intimidated at all,” Reyes recalled during last week’s media luncheon in Los Angeles. “It was interesting. In the faceoff, that was the first time I ever met Jon in my life or [was] even near him. We were face to face and my heart rate didn’t rise at all, I felt at home.

“The lore of Jon Jones is a lot bigger than he actually is. Ego drives this guy, I’m driven by love and passion.”

Get an early look at UFC 247 with our podcast — State of Combat with Brian Campbell — where we look at everything on the main card and get some in-depth analysis from UFC Hall of Famer ‘Suga’ Rashad Evans on what to expect from Jones vs. Reyes and Shevchenko vs. Chookagian.

The 30-year-old Reyes certainly wouldn’t be the first fighter to proclaim that Jones (25-1, 1 NC), already regarded by many as the sport’s greatest of all-time, is “just a man.” The prerequisite confidence of the Heperia, California, native also doesn’t guarantee success against a man in Jones who is 13-0 (1 NC) in UFC title fights.

Just the same, it’s hard not to consider Reyes as very much a live dog entering the third title defense of Jones’ second full reign as champion. Some of that has to do with the dangers that Reyes brings to the table physically. One could argue, however, that just as much of it has to do with Jones and where exactly his mindset rests following a pair of five-round decisions.

Looking back at the two fighters who have given Jones the most trouble as champion — Alexander Gustafsson in their 2013 classic and Thiago Santos last July in a split decision — both possessed similar physical attributes to the 6-foot-4 southpaw Reyes and an equally high-volume style. Both also benefitted from starkly different distractions that likely affected Jones’ performance, which puts into question whether Reyes can potentially benefit from the same.

While Jones certainly met his equal match in Gustafsson, who went on to give then-champion Daniel Cormier all he could handle in a split-decision loss  two years later, “Bones” was admittedly compromised by heavy partying and lack of training heading in. Identifying the “distractions” in play from Jones’ last fight against Santos falls more into the subhead of speculation.

Since Jones returned in December 2018 from his most recent USADA suspension, his approach has been more calculated and efficient than the early days of his title reign that began at the age of 23 in 2011. Now 32, Jones still remains within his physical prime, but it’s worth questioning whether he’s too focused on protecting what he has at the moment and whether that mindset of “fighting not to lose” left the door open for Santos to nearly steal a decision.

Even on two injured legs, Santos remained dangerous enough to give Jones reasons not to close distance with reckless abandon. At the same time, Santos could barely stand in the final two rounds and should’ve been easy prey for Jones’ wrestling to help him set up a finish instead of the close call it became as critics blamed Jones for “playing with his food” too much.

Should Jones fall into the trap of becoming too much of a point fighter — similar to the tail end of Georges St. Pierre’s welterweight title reign as an overprotective measure to protect his standing — Reyes would be the wrong opponent to gamble against.

“As a fighter, I want to have records where people know they will never beat it,” Jones said during the UFC 247 Countdown show. “Guys who are 10 years younger than me, they know their chances of beating it are probably slim and none. I want records like that.

“I want those record books and I want the greatest of all time conversation to not be that much of a conversation when I’m done.”

Matching their skills up against each other and keeping in mind the value of Jones’ title experience and his 7.5-inch reach advantage, an aggressive Jones should be too much for Reyes. Should he attack the legs and look to wear him down before relying on his wrestling to set up a submission just like he did in his 2018 rematch with Gustafsson, one could identify a decently clear path to victory.

The onus will be on Reyes to drastically alter Jones’ ability to dictate the terms of the fight similar to how Santos was able to disarm him. That can only come through the timing of hard and clean strikes early on that give Jones pause. Lucky for Reyes, he holds that ability and has shown the perfect level of almost ignorant confidence that could help a green fighter on the elite level not grasp the idea that they shouldn’t be competing on an even level with the greatest to ever do it.

In the end, that comes down to which version of Jones enters the Octagon — the supernatural 20-something who leaned on his creative striking and legendary chin to finish a litany of future Hall of Famers or his current veteran model that might be a bit too focused on preventing danger rather than enforcing it.

Should this prove to be Jones’ final foray at 205 pounds before a move up to heavyweight, this also has the makings to be the toughest challenge of his second reign.