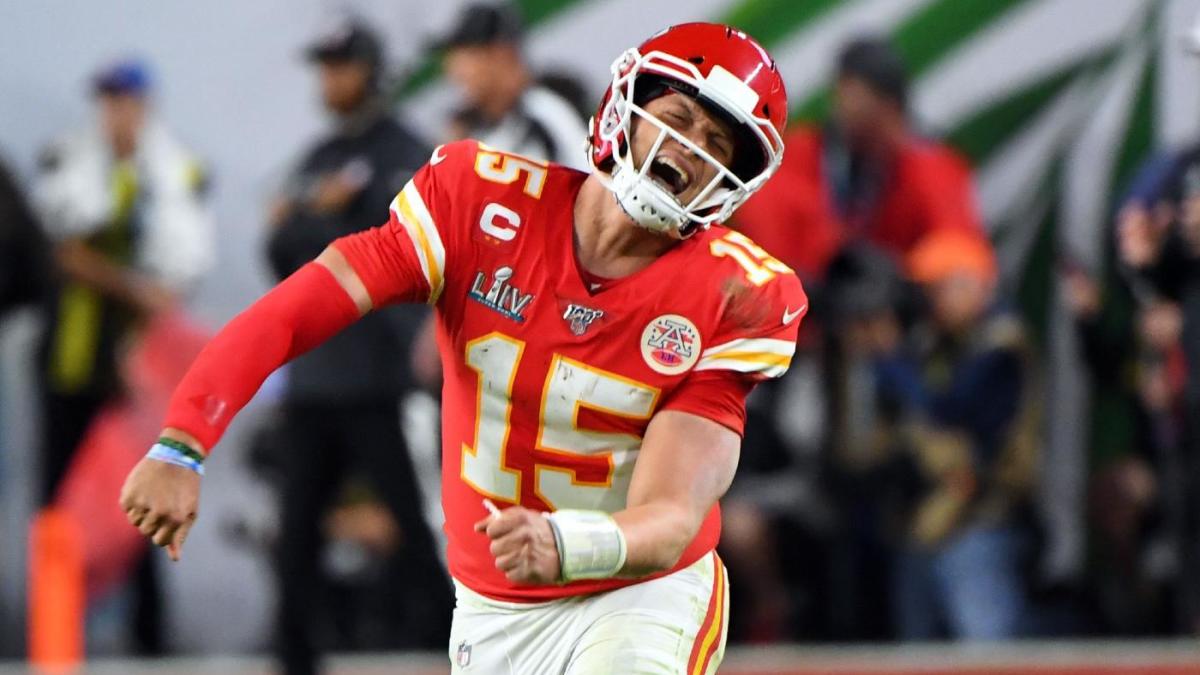 While Patrick Mahomes‘ Super Bowl MVP trophy hasn’t had time to collect dust, that hasn’t stopped oddsmakers from projecting his odds at him taking home next year’s NFL MVP trophy.

Mahomes, the first player to win league and Super Bowl MVP honors before his 25th birthday, is the current favorite to take home the league’s 2020 MVP award. Westgate released the new MVP odds the day after Mahomes helped lead the Chiefs to a victory over the 49ers in Super Bowl LIV.

The league’s MVP in 2018, Mahomes currently has 7/1 odds to win his second MVP award. Ravens quarterback Lamar Jackson, this year’s MVP, is second with 10/1 odds to repeat as the league’s MVP. Seahawks quarterback Russell Wilson, who was in the mix to be the 2019 MVP, is third with 16/1 odds.

Falcons quarterback Matt Ryan, the league’s MVP back in 2016, has 30/1 odds to win his second MVP award. Joining Ryan with 30/1 odds is Tom Brady, a three-time MVP who is slated to be a free agent when the NFL’s new league year begins on Mar. 18. Bills quarterback Josh Allen, Steelers quarterback Ben Roethlisberger, Panthers quarterback Cam Newton, and Browns quarterback Baker Mayfield each have 40/1 odds.

A year after throwing a league-high 50 touchdown passes, Mahomes threw 26 touchdowns and just 5 interceptions while appearing in 14 regular season games. Mahomes was on fire during the postseason, throwing 10 touchdowns against just 2 interceptions while helping the Chiefs become the first team in NFL history to win following double-digit deficits in three consecutive playoff games.

While Super Bowl LIV was not his greatest performance, Mahomes was still able to throw two touchdowns and run for another while becoming the third youngest MVP in Super Bowl history. Trailing 20-10 with half a quarter remaining, Mahomes helped the Chiefs score the game’s final 21 points that included touchdown passes to Travis Kelce and Damien Williams. The comeback began with Mahomes’ 44-yard completion to Tyreek Hill on 3rd-and-15 with just over seven minutes remaining. That completion led to his touchdown pass to Kelce that jumpstarted the Chiefs’ scoring spree.

Mahomes may have solidified his place as the NFL’s best quarterback, the 2019 regular season still belonged to Jackson, who led the NFL with 36 touchdown passes while leading the Ravens to a 14-2 record and the AFC’s No. 1 seed. Jackson also rushed for 1,201 yards — the NFL single season record for a quarterback — while averaging an NFL best 6.9 yards per carry.

But despite his regular season success, Jackson and the Ravens came up short at home in the playoffs for a second straight year. Jackson recently made it clear that his main objective remains mimicking Mahomes as a Super Bowl champion.

“We really want (a Super Bowl),” Jackson told the Ravens’ website from Miami. “I really want that trophy, so bad, for Baltimore, not just myself. Just that city. The fans are great, the coaching staff, the whole organization, the guys that I’m around. I wouldn’t want to be any other place.”