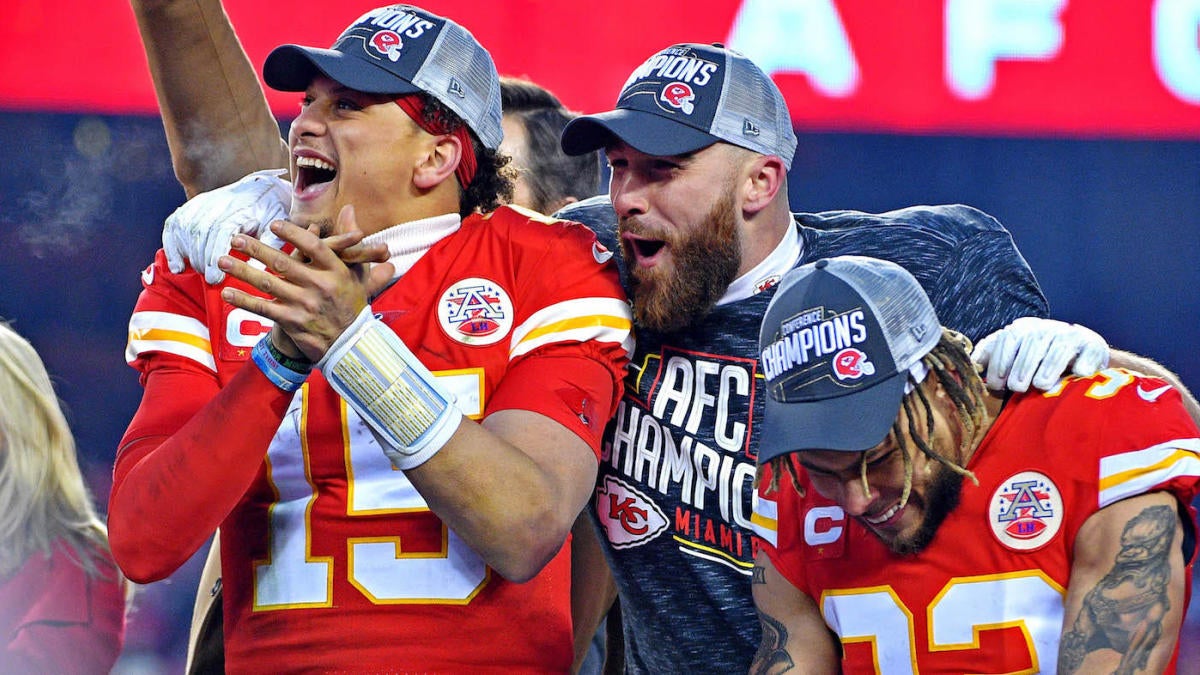 The Kansas City Chiefs have one of the most prolific postseason offenses entering the Super Bowl in NFL history. Kansas City is averaging 43 points per game in two postseason games, the second highest average for any team entering the Super Bowl, after scoring a season-high 51 points in the divisional playoff win against the Houston Texans and 35 points in the AFC Championship game victory over the Tennessee Titans.

The player that has sparked the Chiefs offense is none other than Patrick Mahomes, who is 46 of 70 for 615 yards with eight touchdowns and zero interceptions for a 131.6 passer rating in two postseason games. Mahomes is the first player in NFL history with 250-plus passing yards and 50-plus rushing yards in back-to-back playoff games, and he joined Joe Montana (1984) as the only players with 250-plus pass yards, three-plus pass touchdowns, and 50-plus rush yards in multiple career playoff games. There’s a reason the Chiefs had their two highest scoring totals since December 1, and it’s the red-hot quarterback.

The Chiefs are just the sixth team to enter the Super Bowl averaging over 40 points a game, and the other five teams to accomplish the feat have mixed results. Kansas City finished fifth in points per game (28.2) in the regular season, the lowest ranking among the teams on this list.

The 1990 Bills had the best offense in the NFL, as teams couldn’t figure out Marv Levy’s no-huddle attack. Buffalo averaged 26.8 points per game in the regular season, but scored 44 and 51 points in both its playoff games (beating the Los Aneles Raiders 51-3 in the AFC Championship Game). The Bills seemed like an unstoppable force entering Super Bowl XXV, even if they were facing the New York Giants‘ No. 1 defense.

The Giants controlled the time of possession in order to keep the Bills offense off the field, keeping the ball for 40:33 compared to just 19:17 for Buffalo. The Bills scored just 19 points and didn’t commit any turnovers, and the Giants won 20-19 after Scott Norwood missed a 47-yard field goal as time expired. Buffalo went just 1 for 8 on third down but had 371 yards of total offense.

The 1994 49ers had the NFL’s best offense as well, scoring a league-high 505 points (31.6 points per game). They also were No. 2 in total yards, averaging 378.8 yards per game. San Francisco’s offense was even more proficient in the postseason, scoring 44 points against the Chicago Bears in the divisional round and 38 points against the Dallas Cowboys in the NFC Championship Game. San Francisco was firing on all cylinders entering Super Bowl XXIX.

The 49ers were even better in the Super Bowl, rolling to a 49-26 blowout against the San Diego Chargers. Steve Young threw a record six touchdown passes in the game and threw a record 36 passes without an interception. Ricky Watters and Jerry Rice each had three touchdowns in the game as the 49ers put up 455 total yards.

The 2016 Falcons had the No. 1 offense entering the Super Bowl, scoring a league-high 540 points (33.8 points per game) and finishing No. 2 in total yards (415.8 yards per game). The Falcons were even more dynamic in the postseason, scoring 36 points in the divisional round and 44 in the NFC Championship Game, averaging 457.5 yards per game.

The Super Bowl was going perfectly for Atlanta, as the Falcons led 28-3 with 8:31 left in the third quarter over the New England Patriots. They didn’t score again for the rest of the game as the Patriots racked up the final 31 points en route to a 34-28 overtime victory. Atlanta had just 16 plays for 44 yards after the 28-3 mark after piling up 278 yards on 30 plays, leaving their mark as the most epic collapse in Super Bowl history.

The 2015 Panthers had the No. 1 scoring offense in the regular season as well, averaging 31.3 points per game. Carolina scored 31 points against the Seattle Seahawks No. 1 ranked defense in points allowed, then followed with 49 points against the Arizona Cardinals in the NFC Championship Game, totaling 476 yards of offense.

The Panthers’ Super Bowl performance was embarrassing for league MVP Cam Newton, who went just 18 for 41 for 265 yards and an interception as Carolina scored just 10 points. Newton was sacked six times and fumbled the ball twice with one recovered for a touchdown as Carolina had four fumbles in the game, losing three. The Denver Broncos defense had one of the greatest performances in Super Bowl history, holding the Panthers to 3 of 15 on third down and 315 yards of offense, with six sacks and four turnovers.

The 2014 Patriots are the only team on this list that didn’t have a No. 1 during the regular season, finishing fourth in points per game at 29.3. In the playoffs, New England scored 35 points against the Baltimore Ravens in the divisional round and 45 against the Indianapolis Colts in the AFC Championship Game. The Patriots averaged 409.5 yards per game entering the Super Bowl against the league’s No. 1 defense in the Seattle Seahawks (15.9 points).

New England scoring 40 would have been an impressive feat, but the Patriots were trailing 24-14 in the fourth quarter. Tom Brady led the Patriots on back-to-back touchdown drives (68 and 64 yards respectively) to give New England a 28-24 lead with 2:06 to play. Seattle drove the ball to the New England 1-yard line, but Russell Wilson threw an interception to Malcolm Butler with 26 seconds to play on second-and-goal instead of running the with Marshawn Lynch. The 28-point total was the most the Seahawks gave up since Week 7 of the season, making the Patriots’ comeback even more impressive.