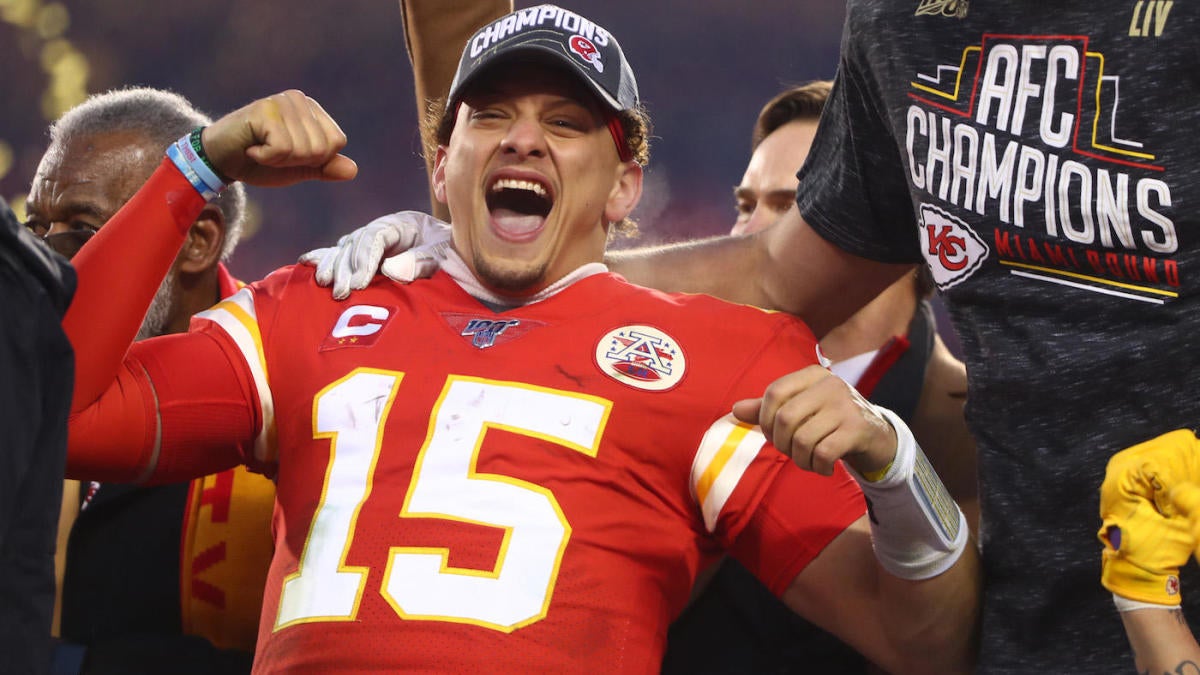 MIAMI — One year after becoming the second quarterback in NFL history to throw for 50-plus touchdowns and 5,000-plus yards in a single season, which also happened to be his first season as an NFL starting quarterback, Patrick Mahomes might’ve found a way to top his MVP season. Last year, Mahomes scrounged together one of the best regular seasons for a quarterback in NFL history. This year — after a regular season that was stellar, but also hindered by injuries and the undeniable force of nature known as statistical regression — Mahomes is in the process of piecing together arguably the best postseason run in NFL history.

With one game remaining — Super Bowl LIV against the 49ers on Sunday — Mahomes might already have submitted the best playoff performance leading up to the Super Bowl in the history of football. At the very least, it’s up there in the annals of all-time great postseason quarterback play — right alongside Joe Montana’s run in 1990, Troy Aikman’s in 1993, Steve Young’s in 1995, Kurt Warner’s in 2009, Joe Flacco’s in 2013, and Matt Ryan’s in 2017 (to name a few of the all-time great postseasons by NFL quarterbacks).

Because the Chiefs found a way to capture a first-round bye in Week 17, thanks to the Patriots inexplicably losing to the Dolphins, Mahomes has only gotten to play in two games to reach the Super Bowl. Already, though, his stats are comparable to the aforementioned quarterbacks during their respective postseason runs, all of whom played in a minimum of three games. In only two games, Mahomes has already almost chased down all of the quarterbacks. At the very least, he’s on pace to surpass most of them on Sunday night.

Flacco’s postseason in 2013 is probably the recent one that is best remembered due to the sheer improbability of a very middling quarterback going on an all-time great run, and Mahomes is only trailing him by two touchdowns in half the games. Passer rating might not be the best statistic to measure quarterback play, but Mahomes’ passer rating is 14.3 points higher than Flacco’s. Mahomes likely won’t catch Flacco in total yards, but that’s only because Flacco played in four games. Mahomes is averaging 360.5 total yards per game. Flacco averaged 289 per game.

Ryan’s run is mostly forgotten due to what transpired after the Falcons jumped out to a 28-3 lead over the Patriots in Super Bowl LI, but it deserves to be included — not to mention, it came after an MVP regular season. Mahomes needs only one more touchdown to tie Ryan in that department. Considering Mahomes has failed to score a touchdown only twice in 35 career starts, one of which was his first-ever start at the end of his rookie season, it’s a safe bet he’ll surpass Ryan. Where he’ll likely come up short is in total yards.

From an efficiency standpoint, Mahomes belongs too.

Something that should standout about both of those tables is how great Montana’s run was in 1990. It’s still the best of the bunch 30 years later.

Now, let’s check in with the advanced metrics over a more-recent span of time.

One former NFL quarterback regarded as a clutch postseason performer who wasn’t included above? Eli Manning, who just retired a week ago. Since there will undoubtedly be Giants fans clamoring for Manning to be included, here’s how Mahomes’ current postseason run compares to both of Manning’s.

And from an efficiency standpoint:

While Manning provided two incredible moments in two iconic upsets over the Patriots, the totality of each of his playoff runs isn’t as impressive as Mahomes’. That doesn’t make Manning’s postseason performance not great. They were unquestionably awesome. They just don’t happen to measure up to Mahomes or the others, at the least from a statistical standpoint (so far, anyway).

But again, that’s not really a fair comparison for Manning. Most quarterbacks don’t compare to him.

“I mean, I won’t compare him to anybody,” said 49ers cornerback K’waun Williams. “He’s Patrick Mahomes.”

Clearly, Mahomes’ statistics are overwhelmingly positive. But what most of those other aforementioned quarterbacks — and Manning — also had was the power of a strong narrative. It’s not just about putting up lofty numbers. It’s also about how they went about doing it.

For Flacco, it was being forced to win four games to capture a Super Bowl, two of which came on the road against far superior teams. He also supplied the iconic play — a 70-yard game-tying touchdown pass with 31 seconds remaining against the Peyton Manning-led Broncos in the divisional round. For Montana, it was about being the greatest quarterback of all time (at that point in time) engineering arguably the greatest postseason stretch by a quarterback (again, at that point in time) to capture his fourth ring and consecutive championships. It’s why Ryan’s 2017 postseason is mostly forgotten. He never got that moment. Everything that he did to build a 28-3 lead in the Super Bowl has been wiped away by what transpired after.

Mahomes doesn’t just have the numbers. He also has the iconic moments.

In the Chiefs’ playoff opener, they fell into an immediate 24-0 hole to the Texans, a hole that Mahomes did not play a role in digging. The offense stalled in the early going due to dropped passes and the special teams essentially handed the Texans 14 points with a blocked and muffed punt. It didn’t matter. In the span of a single quarter, Mahomes turned a 24-0 deficit into a 28-24 lead at halftime. He led the Chiefs to touchdowns on seven straight possessions. The Chiefs won 51-31, becoming the first team in NFL playoff history to win a game by at least 20 points after trailing by 20-plus points.

Watching where Williams was (and where he was looking) when Mahomes released this ball make me chortle. This is such a “trust your route and turn, the ball will be there” play. pic.twitter.com/NL7AJ9qcFc

Mahomes doesn’t really have a window to throw to Kelce here due to the pass rushers, so he creates one by leaning way to his right and altering his arm angle. Still absolutely pinpoint.

This window does not exist for 99% of QB’s. It just doesn’t. There’s a freaking linebacker in the way. It’s witchcraft. pic.twitter.com/DTTAw1x3Ir

Now that Mahomes is actually healthy, he’s fast enough to outrun your pass rushers. Which means man coverage is dangerous because he might have an easy 15 yards in front of him.

2nd and 15? No problem, Mahomes will just throw a laser to Kelce that’s placed so well the coverage doesn’t matter. pic.twitter.com/i9wyuhFobh

Look at where Kelce is as Mahomes starts to throw the ball. Literally turned the other way. There’s no defending this stuff when Mahomes and Kelce are on their game. pic.twitter.com/ndWh95VD85

A week later, with a trip to the Super Bowl at stake, the Chiefs trailed the Titans by 10 points on two separate occasions in the first half. With 6:43 remaining in the second quarter, the Chiefs were losing 17-7. By halftime, they were leading 21-17 after Mahomes threw an absolute laser to Tyreek Hill up the seam for a 20-yard touchdown and then ripped off an impossible 27-yard touchdown run.

The Chiefs offense has only been stopped this postseason when their pass catchers have failed to catch accurately thrown footballs.

In both games, Mahomes also led the Chiefs in rushing yards. The strength of his supporting cast is undeniable, from the coach and playcaller to the offensive line and playmakers, but Mahomes has moved the ball almost entirely on his own.

The only thing left for Mahomes to do? Take down a 49ers defense that finished the regular season second in DVOA before stifling Kirk Cousins and Aaron Rodgers in their two playoff victories. The one and only thing you can ding Mahomes’ playoff run for is the quality of his opponents. Yes, Mahomes was forced to dig the Chiefs out of holes against the Texans and Titans, but he did that against the 26th- and 16th-ranked defenses by DVOA, respectively. Beating the 49ers’ defense would add more legitimacy to Mahomes’ playoff run.

With Nick Bosa, DeForest Buckner, Arik Armstead, and Dee Ford, the 49ers boast arguably the league’s best defensive front, which allows them to generate pressure while only rushing four and dropping seven back into coverage. The 49ers blitzed at the league’s fourth-lowest rate (20.9 percent), but still pressured opposing quarterbacks 28.7 percent of the time. Only the Steelers finished with a higher pressure rate (30.3 percent).

Unfortunately for the 49ers, Mahomes — who can throw out of any platform, change his arm angle, and elude incoming pass rushers with his legs — is seldom bothered by pressure.

“The mobility will be something that I’ll have to utilize, when you have a pass rush like this that can really get after the quarterback,” Mahomes said. “Not necessarily mobility running down the field, but mobility in the pocket, being able to move the pocket whenever I have to, and getting the ball out of my hands will be very important.”

Given how dominant this 49ers defense is, an article like this might seem premature. The cruel reality of the playoffs is that it only takes one bad game — sometimes, one bad throw — for a great postseason run to turn into a forgettable one. Sometimes, it doesn’t even take a bad performance. A season-ending loss is enough to make people forget. Nobody ever talks about Ryan’s postseason run in 2017, when in reality, it was better than Flacco’s, a run that is still widely referenced. Ryan’s postseason run is even overshadowed by both of Eli Manning’s, even though neither of those runs were nearly as impressive.

In that sense, this article probably isn’t premature. We can expect Mahomes to be Mahomes on Sunday, and polish off an already all-time great postseason run with anywhere from a solid to great performance against an elite defense in the Super Bowl.

The only question is if the Chiefs will be able to win because if the Chiefs don’t win, there’s a very real chance Mahomes’ run won’t be remembered with Flacco’s and Montana’s. It’ll be forgotten — in the same way Ryan’s playoff run has been erased. But if the Chiefs win with Mahomes dismantling a great defense, he’ll skyrocket to the top of the list, right there alongside Montana.

“You understand that you don’t get these opportunities all the time,” Mahomes said. “You have to go out there and really take advantage of it.”