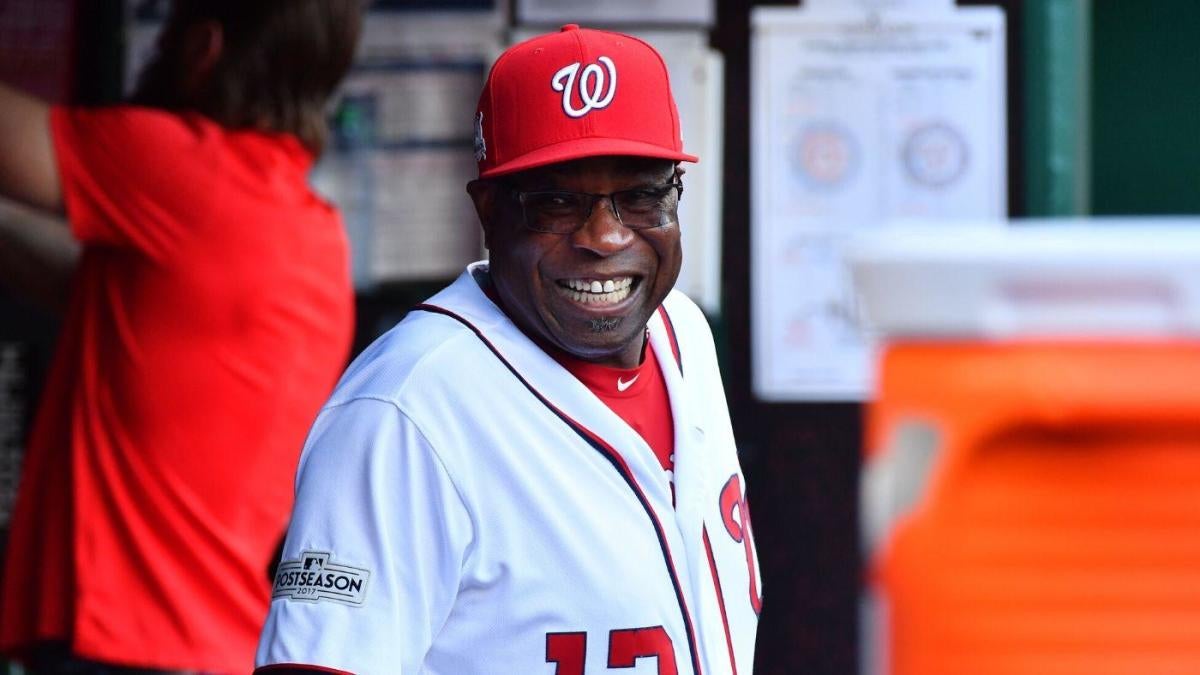 Bryce Harper entered the series only 18 at-bats removed from a major knee injury. Max Scherzer injured his hamstring in his final regular-season start. The Nats as a team hit .186 in the series, Daniel Murphy and Bryce Harper hit .211. Anthony Rendon .176. Trea Turner only had a .217 OBP and one stolen base. Ryan Zimmerman hit .150. The team slugged just .335.   The 2015 Nationals completely fell apart and missed the playoffs despite having a roster full of talent. There were plenty of reports of clubhouse issues, namely manager Matt Williams losing the locker room. Enter Dusty with a 95-win 2016 season and 97-win 2017. He was scapegoated after losing the NLDS both years in five games. I have no idea how anyone could have watched that series unfold and come to the conclusion it was Baker’s fault, but it was a sentiment felt by many fans and also apparently the Nationals, who fired Baker following that series. He’s the career scapegoat, despite always taking his team to the playoffs.Baker, 70, has 22 seasons of managerial experience with zero connections to anything even resembling a scandal. His teams have never been considered dirty or otherwise unprofessional. He’ll be a master at dealing with the media this season and oversee players who will surely be under tons of scrutiny. Skilled managers find ways to deflect attention from the players and take any heat that needs taken. He’ll be brilliant on this front as well. Dusty’s guys lost that game, 2-1.  Back in 2017, I wrote the following about Baker and the Nationals losing to the defending champion Cubs. Baker’s managerial record doesn’t hurt, either. At some point, things have to break right for him in the postseason. It’s not like World Series winning managers are all models of perfection. Remember Joe Maddon botching his bullpen usage in 2016? Ned Yost isn’t a great tactician and the Royals won it all. Bruce Bochy is “old school” — a common gripe about Baker — and won three rings. Keeping the clubhouse a positive place has long been a skill of Baker’s and that’ll come in handy in 2020. He’s simply a perfect presence to follow up one of the biggest scandals in the sport’s recent history.With the 2012 Reds, ace Johnny Cueto got hurt in the first inning of NLDS Game 1. No, it wasn’t due to overuse of pitching. The 2012 Reds were historically durable, Cueto averaged 104 pitches per game and the injury was back spasms. His ailment in the playoffs was bad luck. The Reds would lose that series in five games without their top pitcher. Was that Dusty’s fault? Really? And this was the game-winning hit in one of the Cubs’ wins:  The only downside about Baker is a nonsense stigma that he “chokes” in the postseason — we’ll get to that below. But the positives exponentially outweigh the negatives here, mostly notably in his recent history. The experience matters, too. Throwing a coach — even a very capable candidate like Joe Espada — without managerial experience into this fire wouldn’t have been the right move. They needed someone with decades of credibility who has seen just about everything in this game.

The Houston Astros organization needs to move forward looking for the best ways to remove the stain from their sign-stealing scandal as quickly as possible. In hiring Dusty Baker as manager, the Astros have taken a huge step.

Hopefully Baker has realized on-base percentage is far more important than batting average. He doesn’t overuse pitchers anymore, as we saw with the Reds and Nationals, so that concern is gone for anyone who isn’t stuck in 2003. He will still run out lineups people don’t like and make pitching changes people question, but that’s the case for all 30 managers every season. Baker spent 10 seasons as Giants manager to start his post-playing career, going to the playoffs three of his last six years, including an NL pennant win in 2002. In 2003, Baker went to Chicago and took the Cubs to the NLCS. They won 67 games the previous season.  In 2008, Baker took over as Reds manager. They were coming off a last-place finish. They won the division in his third season then again won it in his fifth. They were a wild card team in his sixth season, but apparently that wasn’t good enough and he was fired. That’s also happened a lot.Remember Game 5? Gio Gonzalez was lousy, so Baker went to Max Scherzer in relief (remember praising such moves last October?) and Scherzer gave up four runs in an inning. That’s on Scherzer. Also, Baker’s club was victim of some questionable umpiring…Had the play been ruled properly, the inning would have been over. Instead, the Cubs scored a run on the play. They won by one run.  In the past 24 seasons, the Reds have made the playoffs just three times. All three came with Baker as manager. Since 2000, they’ve had just three seasons with a winning record; yes, all with Baker. When the Reds hired Baker, they had made the playoffs three times since 1976. He made it three times out of four years. Baker is far from perfect as a manager. He is, however, the perfect hire given the state of the Astros right now. Some of the complaints about Baker from the 2002 World Series and 2003 NLCS failures are fair. But those losses were nearly two decades ago, and he was sabotaged by things out of his control in each of his last two stops.