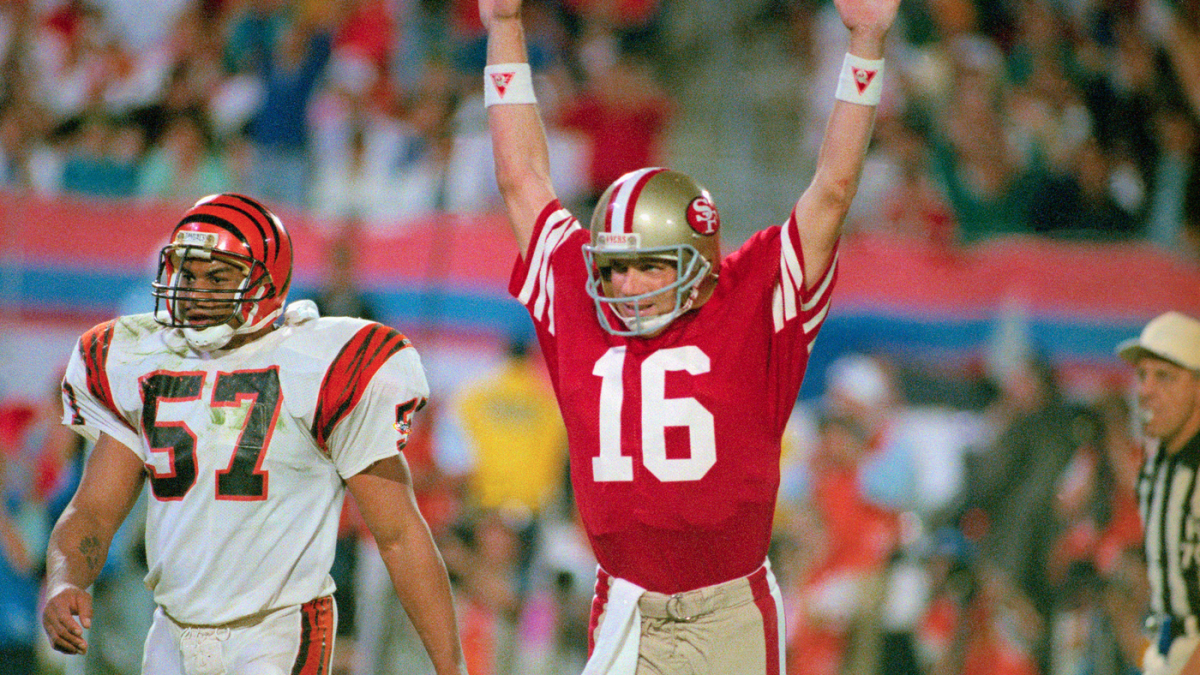 The 49ers have played in one Super Bowl since winning their fifth ring, but despite their recent “drought,” San Francisco still stand on the precipice of history. The modern-day 49ers, if they can defeat the Chiefs in Super Bowl LIV, will join the teams from the 1980s and ’90s that have brought Super Bowl titles back to the West Coast. Speaking of West Coast, Bill Walsh, the first coach to lead San Francisco to a Super Bowl, helped create a 49ers’ dynasty with the utilization of his revolutionary offense.

Here’s a look at what transpired during the 49ers first seven trips to the Big Game.

A six-win team the previous season, the 49ers went 13-3 during the 1981 season on the strength of third-year quarterback Joe Montana, the play calling of Walsh, and a revamped defense that included three rookie defensive backs in Ronnie Lott, Eric Wright and Carlton Williamson.

Walsh, who developed his legendary West Coast offense with Hall of Fame coach Paul Brown in Cincinnati, was heartbroken after Brown decided not to anoint him as the Bengals‘ new head coach after Brown stepped down after the 1975 season. But after Dwight Clark’s infamous catch propelled his team to a win over the Cowboys in the 1981 NFC Championship Game, Walsh would get his shot a redemption against Brown’s Bengals in Super Bowl XVI.

Led by Walsh’s methodical game plan, the 49ers jumped out to a 20-0 halftime lead (the largest lead in Super Bowl history to that point) before holding on for a 26-21 win. A key moment during the game was an epic goal line stand by the 49ers that prevented the Bengals from pulling off a possible comeback. Montana, despite a modest stat line (he threw for 157 yards with a touchdown), won his first MVP award, as the 49ers won their first of four Super Bowls during the 1980s.

Super Bowl XIX: A perfect end to a near perfect season

Marino, the league’s MVP that season after throwing for 5,084 yards and 48 touchdowns during the regular season, quickly gave the Dolphins an early 10-7 lead. Marino’s magic, however, was not enough against the masterful Montana, who threw for a then Super Bowl record 333 yards and three touchdowns. Montana also ran for 59 yards, which was at the time the Super Bowl record for a quarterback. Two of Montana’s touchdown passes went to running back Roger Craig, who also rushed for a touchdown while becoming the first player in Super Bowl history to score three touchdowns in a single game.

While Marino did manage to throw for 318 yards, he was consistently under pressure from an unrelenting 49ers’ defense that sacked him four times. Marino also threw two second half interceptions, as the 49ers shut out the Dolphins during the second half of their 38-16 victory.

“They came to see an offense,” 49ers’ center Randy Cross told a nearby cameraman near the end of the game, “and the wrong one showed up.”

Super Bowl XXIII: The Team of the ’80s

Once again, a 49ers’ Super Bowl run was inspired by previous playoff heartbreak. A year after being upset by the Vikings in the divisional round of the playoffs, the 49ers set out to win their third Super Bowl of the ’80s. But another Super Bowl run would not come easy for the 1988 49ers, who entered the season with a quarterback controversy between Montana and Steve Young, who joined the 49ers as a free agent in 1987.

After playing musical chairs with his quarterbacks during the first three-quarters of the season, Walsh decided to stick with Montana after the 49ers slumped to 6-5 with five games remaining. But after a “players only meeting” that was spurned on by Lott, San Francisco won four out of their final five regular season games to clinch the NFC West division title. After blowing out the Vikings in a rematch of the ’87 playoffs, the 49ers upset the Bears in Chicago to earn a rematch with the Bengals in Super Bowl XXIII.

In one of the most competitive games in Super Bowl history, the 49ers found themselves trailing 16-13 and pinned at their own 8-yard-line with 3:10 remaining. With the Super Bowl in the balance, Montana led the 49ers’ offense on a 92-yard drive that culminated with his 10-yard touchdown pass to John Taylor with 34 seconds remaining. In what was Bill Walsh’s final game as the 49ers’ coach, San Francisco prevailed, 20-16. Montana threw for a then Super Bowl record 356 yards, while receiver Jerry Rice took home MVP honors after catching 11 passes for a Super Bowl record 215 yards.

While past playoff failures was the motivation behind their previous two Super Bowl wins, the ’89 49ers were out to prove that they could win a Super Bowl without Walsh, who was replaced by the team’s former defensive coordinator, George Seifert. While the ’88 season was a roller coaster ride, the ’89 season looked like a walk in the park for the 49ers, who won 14 regular season games before blowing out the Vikings and Rams in the NFC playoffs.

The greatness of the 49ers’ 1989 squad was on full display in Super Bowl XXIV. The Broncos, who had appeared in two of the previous three Super Bowls, never had a chance, as the 49ers scored 27 points in the first half and 28 points in the second half. Behind a dominant defensive effort and Montana’s then Super Bowl record five touchdown passes, the 49ers posted a 55-10 victory while setting a Super Bowl record for the most points scored in a single game as well as the largest margin of victory.

Montana became the first player to win three Super Bowl MVP awards. San Francisco’s defense was just as dominant, forcing four turnovers while holding John Elway and the rest of the Broncos’ offense to 103 total yards. In the process, the 49ers put an exclamation point on their already established status as the Team of the 80s while becoming the fourth franchise to win back-to-back Super Bowls.

After a five-year hiatus, the 49ers reclaimed their place atop pro football’s landscape in 1994. Led by league MVP Steve Young and NFL Defensive Player of the Year Deion Sanders, the 49ers went 13-3 during the regular season before besting the Bears in the NFC divisional round.

It can be argued that the 49ers’ most satisfying victory of the ’94 season was their 38-28 victory over the Cowboys in the NFC Championship Game. After losing to the Cowboys in the previous two NFC title games, the 49ers jumped out to a 21-0 lead on the strength of two forced turnovers and a 29-yard touchdown pass from Steve Young to running back Ricky Watters. After two second quarter touchdowns by Dallas cut the 49ers’ lead to 10 points, Young’s 28-yard touchdown pass to Rice just before halftime served as the final nail in the Cowboys’ coffin.

If the NFC title game was the main course, Super Bowl XXIX was icing on the cake for the 49ers, who were never seriously threatened by the AFC champion Chargers. Behind Young’s record six touchdown passes, the 49ers recorded a 49-26 victory while becoming the first franchise to win five Lombardi Trophies.

The infamous power outage in Super Bowl XLVII left both the 49ers and the Ravens in the dark, but the in-game delay that was caused by the outage played a significant role in the 49ers’ gallant comeback. Trailing 28-6 at the time of the power outage (which caused a 34-minute delay), the 49ers would score 26 of the game’s ensuing 29 points to pull to within two points of the Ravens with 9:57 left. But after the 49ers’ game-tying two-point conversion fell short, San Francisco found themselves trailing by five points with 4:19 remaining.

Needing 80 yards for the game-winning score, a 24-yard completion from quarterback Colin Kaepernick to receiver Michael Crabtree and a 33-yard run by Frank Gore helped get the 49ers inside the Ravens’ 5-yard line with two minutes left. But the 49ers’ comeback bid would come up short, as Kaepernick slightly overthrew his fourth down pass to Crabtree in the end zone. Despite a valiant effort, the 49ers lost a 34-31 decision to the Ravens while suffering the franchise’s first Super Bowl defeat.

San Francisco would make it back to the NFC Championship Game the following season, losing to the eventual Super Bowl champion Seahawks. Richard Sherman, a key member on that Seattle championship team, will now look to lead the 49ers to their sixth Super Bowl win against the Chiefs.

Tom Brady will be first quarterback to start a conference championship...