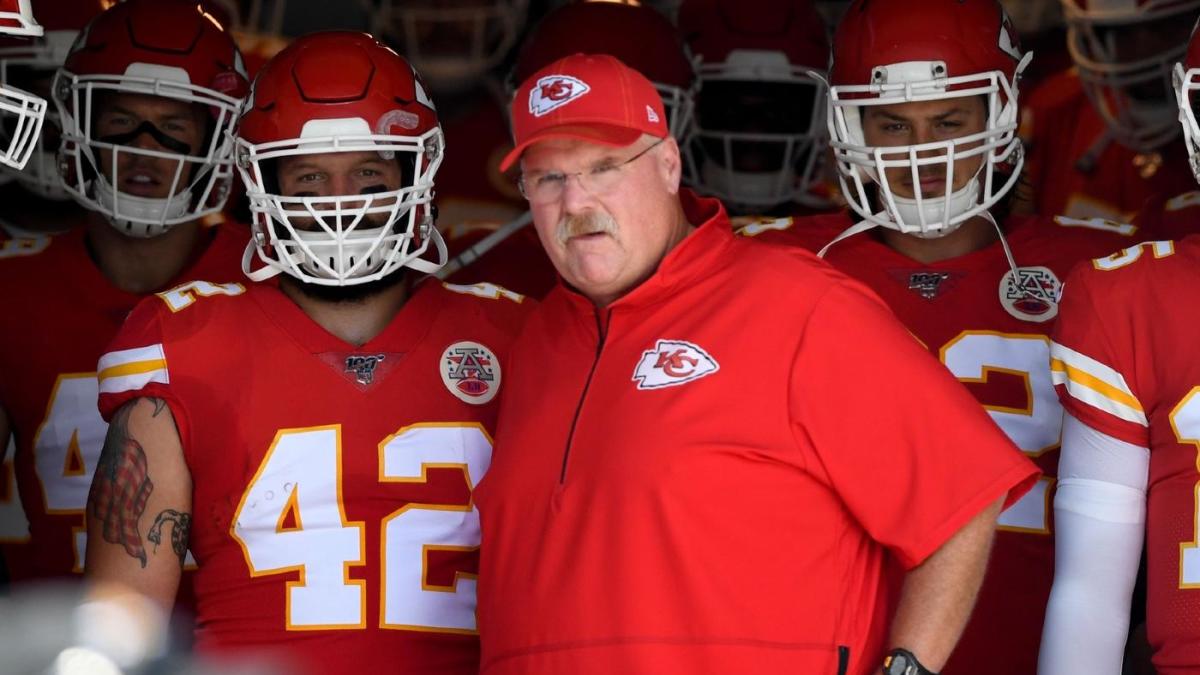 Andy Reid eschewed his trademark Hawaiian shirt for a suit and tie upon arriving in Miami for Super Bowl LIV on Sunday evening. But while Reid left his Hawaiian shirts at home, many of his players paid homage to Reid by donning special red Hawaiian shirts during Sunday’s flight.

Reid, who is in the midst of his 21st season as an NFL head coach, is the Super Bowl‘s biggest sentimental favorite since John Elway helped the Broncos upset the Packers in Super Bowl XXXII, marking the end of Elway’s 15-year wait to hoist the Lombardi Trophy. Like Elway, Reid has enjoyed a highly successful NFL career, as he is seventh all-time in regular season wins and sixth in playoff wins.

But despite his regular season and postseason success, Reid has yet to win a Super Bowl, as next Sunday will mark the second time that he has led a team to the Big Game. Reid, who became a head coach with the Eagles back in 1999, led the Eagles to the 2004 NFC championship before falling to the defending champion Patriots in Super Bowl XXXIX.

The Chiefs, the team Reid has coached since 2013, are also hoping to end their Super Bowl drought, as next Sunday will be the Chiefs’ first Super Bowl appearance since January 1970. The first AFL participant in what is known regarded as the Super Bowl, the Chiefs returned to the Super Bowl three years later, defeating the Chiefs in Super Bowl IV in what was the final game played between the AFL and the NFL, as the two leagues merged during the 1970 offseason.

To win the Super Bowl, Reid and the Chiefs — currently a one-point favorite — will have to defeat a 49ers team that won 13 games during the regular season before ousting the Vikings and Packers at home during the NFC playoffs. While his preparation for the 49ers was just in its opening stages, Reid discussed the challenge that he and his team will be up against just hours after defeating the Titans in last Sunday’s AFC Championship Game.

“I know they’re a good, solid football team,” Reid said of the 49ers, who clinched their first Super Bowl berth since 2012. “They play hard and aggressive. You saw that last night playing against a good Green Bay team. They do a variety of things on both sides of the ball. They can run it, they can pass it on the offensive side. On defense, they’ve got a variety of things that they throw at you. Solid on special teams, so, it’s all and all a good football team. It’s well coached. Very well coached.”

Reid also spoke on the merits of his quarterback, Patrick Mahomes, who could become the first player in NFL history to win a Super Bowl and a league MVP award before his 25th birthday.

“He’s great to be around every day because he brings great energy every day,” Reid said of Mahomes, who threw eight touchdowns and zero interceptions during the Chiefs’ playoff wins over Houston and Tennessee. “You respect that because everybody’s got their ups and downs because there’s life outside of football. When he’s in that building, it’s all football, it’s all team. He’s never given a ‘It’s about me.’ I’ve never heard that from him. It’s all 100% about the team, ‘How we’re doing, what we can do better, how can I help.’ And then buckles down to get the game plan down. He studies. For young guys out there, what a great example that is about hard work.

“He’s a special kid. This city’s lucky to have him. It’s a nice match. Great fans and a great quarterback like that.”