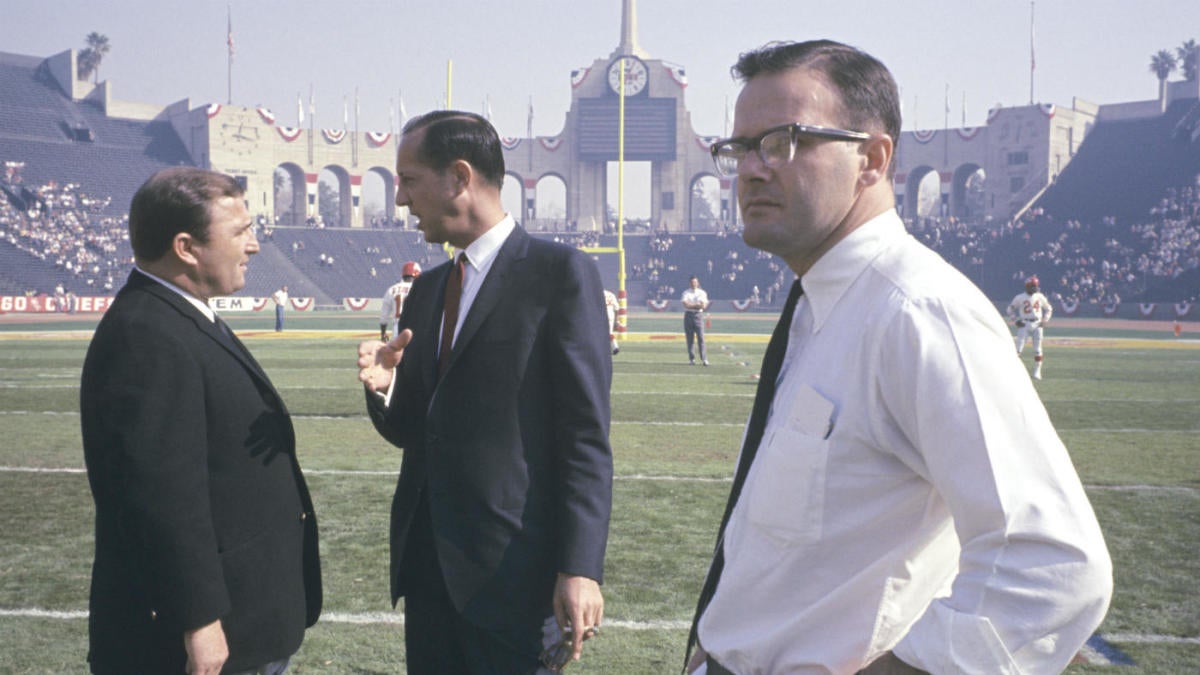 Lamar Hunt was a true innovator. After trying — and failing — twice to acquire an NFL team, Hunt decided to do the unthinkable: create a brand new football league that would one day compete with the league that spurned him.

Payback, however, was not Hunt’s goal. The goal of Hunt’s league — the American Football League — was to create a more exciting brand of football while tailoring rules to help the offenses (sound familiar?). After several lean years, the AFL quickly established itself as a more fun, entertaining alternative to the more traditional NFL. Not only did AFL games include higher point totals, they also included colorful jerseys (to help reel in young fans) and just as colorful personalities that included Chiefs coach Hank Stram and Jets quarterback Joe Namath.

Along with Namath, the league possessed several household names that included Jack Kemp (who quarterbacked the Bills to two AFL titles while appearing in four straight AFL title games) and Chargers receiver Lance Alworth, whose career earned him a spot in the Pro Football Hall of Fame. Over time, the league thought it was ready to compete with the mighty NFL, and before the start of the 1966 season, Hunt, who was also the owner of the Chiefs, penned a letter to NFL commissioner Pete Rozelle to see if the NFL champion would care to face his league’s champion once their own championship games had concluded.

“If possible, I believe we should ‘coin a phrase’ for the Championship Game,” Hunt wrote, according to Michael MacCrambridge’s book, “America’s Game.” “I have kiddingly called it the ‘Super Bowl,’ which obviously can be improved upon.”

Rozelle, according to former NFL publicity director Don Weiss, did not love the nickname. it’s been reported that Rozelle would have called the game the Pro Bowl if that wasn’t already the name of the league’s all-star game.

“Pete was a pretty regular person, but he was a stickler on words and grammar, and ‘super’ was not his idea of a good word,” Weiss said. “He thought ‘super’ was a word like ‘neat’ or ‘gee-whiz.’ It had no sophistication.”

When no other ideas came to light, Rozelle and Hunt settled on the first game between the two leagues being branded as the “AFL-NFL Championship Game.”

Rozelle wasn’t the only one that didn’t love Hunt’s “Super Bowl” nickname. Before pitching the name to Rozelle in his note, Hunt initially mentioned it during a meeting with the other AFL team owners when trying to decide if there should be one or two weeks between the leagues’ respective title games and the AFL vs. NFL game. While no one directly shot down Hunt’s idea, the name Super Bowl was received with chuckles by the other owners.

“Nobody ever said, ‘Let’s make that the name of the game,'” Hunt recalled in MacCrambridge’s book. “Far from it, we all agreed it was far too corny to be the name of the new title game.”

At this point in the story, there’s a few questions that need answered. Where did Hunt’s “Super Bowl” idea come from? And how did the AFL-NFL Championship Game get renamed to the Super Bowl after it was mocked by AFL owners and rejected by Rozelle?

The answer to the first question can be traced back to a kid’s toy that was played with by Hunt’s children during the mid ’60s. One day, Hunt saw his kids playing with a Superball, a “mystery ball with 1,000 bounces” that was branded as “the greatest ball ever created.”

While the AFL-NFL Championship Game was the official name for the 1967 game played between the AFL champion Chiefs and the NFL champion Packers, the game was often referred to in the media as “the World Series of football.” But while that nickname never gained momentum with the general public, several players and media members had begun to use Hunt’s “Super Bowl” nickname when publicly talking about the AFL-NFL title game. In fact, NFL Films, during their coverage of Green Bay’s 35-10 victory, referred to it as the “Super Bowl.”

Over the next year, the phrase “Super Bowl” spread like wildfire, as fans, players, media circuits and national commentators had starting using Hunt’s phrase on a regular basis. Following the second AFL vs. NFL installment, another blowout victory by Vince Lombardi’s Packers (this time over Al Davis’ Raiders), the leagues decided to officially use Hunt’s nickname as the official name of the AFL-NFL matchup.

Super Bowl III, played in January of 1969, was the first AFL-NFL game that was officially dubbed as the Super Bowl. Fittingly, the third installment of his annual game would break the mold while helping make the Super Bowl the spectacle that it is today. Despite being 18-point underdogs to Don Shula’s heavily favored Colts heading into the game, Namath famously guaranteed a victory for his Jets. With more hype surrounding this Super Bowl than the previous two combined, Namath, in front of a packed house at Miami’s fabled Orange Bowl, helped lead the Jets to a shocking upset that exponentially increased the popularity of the NFL and Super Bowl while also providing instant validation for Hunt and the AFL.

A year later, the AFL and NFL agreed to merge following the 1969 season, meaning that the fourth installment of the Super Bowl would be the final game ever played between the two leagues. A year after watching the Jets become the first AFL team to defeat the NFL, Hunt looked on with pride as his Chiefs pulled off their own upset in Super Bowl IV, defeating the Vikings, a 13-point favorite, 23-7 to even the AFL’s record with the NFL at two wins apiece.

While the Super Bowl trophy has been named after Lombardi, the AFC championship trophy has been named in Hunt’s honor. Last Sunday, the modern day Chiefs secured their first Hunt Trophy since the Chiefs last appeared in the Super Bowl 50 years ago. A week from Sunday, they will look to win Hunt’s “other” trophy in what would be a fitting end to the NFL’s centennial season.