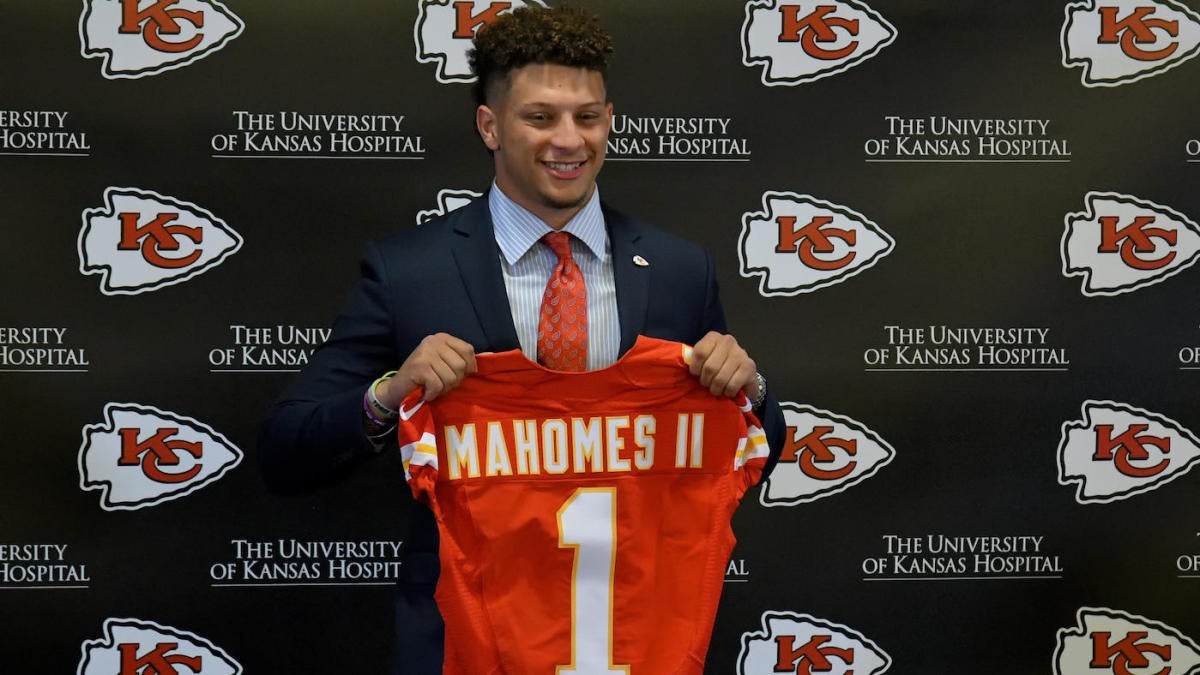 Fans of the Kansas City Chiefs will always remember the 2017 NFL Draft. In the first round, they made a trade that would alter the future of their franchise and the landscape of the NFL at large.

The 2017 draft class was a bit top-heavy when it came to quarterbacks. It wasn’t considered a deep class, but there were a couple of signal callers who had the potential to develop into NFL stars. Mitchell Trubisky, Deshaun Watson and Patrick Mahomes were considered the top three quarterbacks in the draft once Day 1 arrived. However, it’s important to remember just how far Mahomes shot up draft boards. Early in the process, he was discussed as a Day 2 pick, then a fringe first-rounder, but all it took was one team to fall in love.

The San Francisco 49ers sat at No. 2 overall, and they needed a quarterback. Brian Hoyer was slated to be their starting signal caller, and they were thought to be a team that would take a flier on a rookie. Instead, the Chicago Bears called and offered four picks to move up one spot from No. 3 to No. 2. Since the Bears had just signed Mike Glennon to be their starter less than two months earlier, the general consensus was that they would take a defensive player, such as Stanford defensive end Solomon Thomas. Instead, the Bears opted to take Trubisky at No. 2 overall.

With the 49ers on the clock at No. 3 overall, they could have taken someone like Mahomes or Watson, but they decided to shore up the defensive line by taking Thomas.

As the draft went on, Trubisky ended up being the only quarterback to be selected in the first nine picks, and the Buffalo Bills were put on the clock at No. 10 overall. The Chiefs then decided to make a bold move, and trade their first-round pick (No. 27 overall), their third-round pick (No. 91 overall) and their 2018 first-round pick to acquire No. 10 overall. Many thought the Chiefs were moving up for the two-time Heisman Trophy finalist and college football champion Watson. They were wrong.

Watson was considered by many to be the top quarterback in the draft. He put up record numbers for the Tigers and led Clemson to back-to-back College Football Playoff appearances. He compiled a 32-3 record as a starter, had the best winning percentage in school history for a quarterback and finished third in ACC history in total offense — only behind Philip Rivers and former Clemson quarterback Tajh Boyd. While you could argue that Watson didn’t have as high of a ceiling as some of the other quarterbacks in the class, he definitely appeared to be the most “sure thing.”

Instead, the Chiefs decided to take the big-armed quarterback out of Texas Tech: Mahomes.

The Whitehouse, Texas, native wasn’t highly touted during the early stages of the draft process. His footwork was torn apart by analysts and many pointed to the fact that his stats were inflated due to the Air Raid offense. But as we mentioned earlier, he gradually began to climb up draft boards as the draft day approached. Not many saw Mahomes being selected at No. 10 overall, but most Chiefs fans were excited after watching five minutes of his highlights tape.

While Kansas City had Alex Smith as its starting quarterback, he was coming off a season where he passed for 15 touchdowns and eight interceptions. It wasn’t out of the realm of possibility that the Chiefs were looking to upgrade their quarterback situation — even if they had just gone 12-4 during the 2016 season. Kansas City could redshirt Mahomes for a year, plus Smith’s contract included no guaranteed money in 2018.

The Chiefs’ 2017 draft class had only six players, but with prospects like Tanoh Kpassagnon, Kareem Hunt and Jehu Chesson, the potential was there. All attention, however, was given to Mahomes.

The young quarterback threw for 390 yards and four touchdowns in his first four preseason games, and he recorded an overall passer rating of 109.3. He wouldn’t see any more action until Dec. 31, when he got to start the regular-season finale against the Denver Broncos. It certainly wasn’t a great performance, as Mahomes completed 62.9 percent of his passes for 284 yards and one interception, but behind the scenes, it appeared that the Chiefs were ready to make a big change under center.

Smith couldn’t have played better than he did in his final season in Kansas City. He passed for a career-high 4,042 yards, 26 touchdowns, and only five interceptions, but the Chiefs opted to trade him to the Washington Redskins. With that big move, Kansas City officially entered the Mahomes era.

The 2018 campaign was a storybook season for the Chiefs. It began against the Los Angeles Chargers, when Mahomes threw for 256 yards and four touchdowns in a 38-28 victory. The Chiefs won eight out of their first 10 games, and finished in first place in the AFC with a 12-4 record. While their defense was subpar, it appeared the Chiefs were gearing up for a Super Bowl appearance thanks to their wunderkind under center. Kansas City rolled past the Indianapolis Colts in the divisional round, but had to take on the New England Patriots in the AFC championship game. The contest was to be played at Arrowhead, however, which gave fans confidence that could end the Patriots dynasty and advance to Super Bowl LIII. While Mahomes threw for 295 yards and three touchdowns, the Chiefs fell in overtime to the eventual Super Bowl champions, 37-31.

Even with a disappointing end, the season proved that the Chiefs were onto something special. Mahomes won the 2018 MVP award after passing for 5,097 yards, 50 touchdowns and 12 interceptions. Only two quarterbacks in NFL history have thrown for 5,000 yards and 50 touchdowns in a single season: Peyton Manning in 2013 and Mahomes in 2018. While Manning threw for more yards and touchdowns in 2013, Mahomes averaged more yards per attempt and tallied a touchdown on a higher percentage of his passes.

Entering the 2019 season, the Chiefs were considered a Super Bowl favorite. They got off to a bit of a shaky start, however. Tyreek Hill was injured in the season opener against the Jacksonville Jaguars, Mahomes played hurt through back-to-back losses against the Colts and Houston Texans, then he dislocated his kneecap against the Broncos in Week 7. He would miss two games due to the injury, and his return to the field in Week 10 was spoiled by the Tennessee Titans, who won a 35-32 thriller thanks to a blocked field goal on the last play of the game. That Nov. 10 setback ended up being the Chiefs’ last loss of the season; they closed the regular season with six consecutive victories, and then won both playoff games by double digits to advance to Super Bowl LIV.

Mahomes finished with 4,031 passing yards, 26 touchdowns and five interceptions in 14 regular-season games. Clearly, his numbers weren’t as good as last year’s, but he really stepped up his game in the postseason. In Kansas City’s two playoff games, Mahomes threw for 615 yards and eight touchdowns. He also was the Chiefs’ leading rusher in both games; he had a combined 106 yards and one touchdown.

The answer was pretty clear early on, but the Chiefs’ draft-day gamble paid off. Mahomes holds NFL records for most touchdown passes thrown in his first eight career games, the youngest quarterback to throw for six touchdowns in a game, the most consecutive road games with three or more touchdown passes and he was the fastest player to 7,500 career passing yards. He also already owns a handful of Chiefs franchise records. As my colleague Sean Wagner-McGough wrote about this week, Mahomes is already considered one of the best quarterbacks to have played in the NFL.

The Chiefs and 49ers will face off next Sunday for a chance at NFL glory. San Francisco’s No. 3 overall pick in the 2017 NFL Draft will be chasing around the quarterback the 49ers probably wish they would have drafted at No. 3 overall — but hindsight is 20/20.

The 49ers received four draft picks to move back one spot, but they actually traded two of those away. Thomas was of course selected at No. 3, but they traded the No. 67 overall pick to the Saints — who took the rookie of the year, running back Alvin Kamara — and traded No. 111 overall to the Seattle Seahawks, who took safety Tedric Thompson. The 49ers then used the 2018 third-round pick to draft linebacker Fred Warner at No. 70 overall. He started all 16 games this season, and he recorded 118 combined tackles, three sacks, nine passes defensed, and one pick-six.

Hoyer started the first six games of the 2017 season, but he was benched in Week 6 for rookie C.J. Beathard, who was the quarterback the 49ers drafted in the third round that year. Hoyer would be released only a couple of weeks later while Beathard took over as the permanent starter.

In October 2017, the 49ers then made the big move which would help them get to Super Bowl LIV: they sent a second-round pick to the Patriots in exchange for Jimmy Garoppolo. He made his first appearance as a 49er in Week 12 against the Seahawks when Beathard went down with an injury. Garoppolo then took over as the permanent starter the next week, and he led San Francisco to five consecutive victories.

Garoppolo entered the 2018 season as the unquestioned starter, but he tore his ACL in Week 3 against the Chiefs. When he returned in 2019 to again try to complete his first full season as a starter, he led the 49ers to a 13-3 record while throwing for 3,978 yards, 27 touchdowns, and 13 interceptions.

Both the Chiefs and 49ers are happy with where they currently stand, but it’s interesting how that 2017 draft affected how the future would turn out for these two teams.