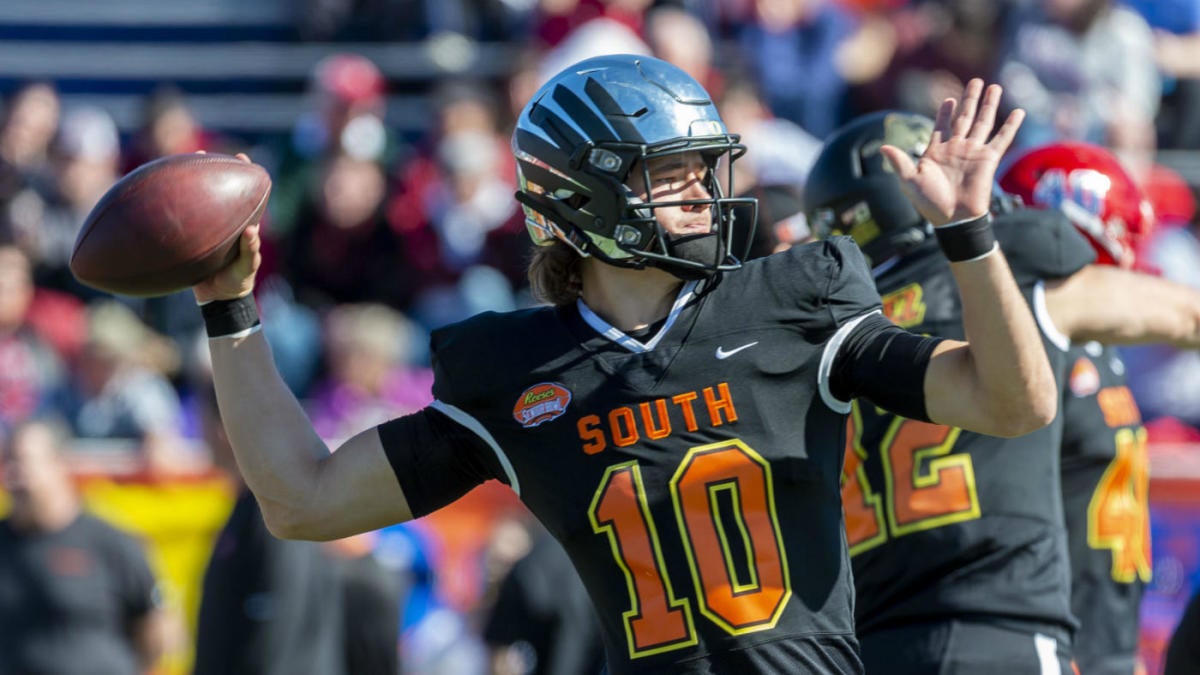 MOBILE, Ala. — This week was all about Justin Herbert proving himself to the doubters, those folks (us included) who weren’t sure based on what we saw in 2018 and 2019 that he could consistently play at the level required of an NFL quarterback with the physical tools to easily find himself drafted in the top 15.

Herbert couldn’t have scripted things any better, starting with Tuesday’s media session, where he told CBSSports.com that NFL teams wanted to see him be a leader on the field above all else, right through the three practice sessions where he was the best quarterback on the field. That carried over into Saturday’s game where Herbert took the field with the South team on the very first drive.

Eight plays and 65 yards later, the South led 7-0, thanks to 4-for-4 passing from Herbert, who also added a 19-yard run, and punctuated it all with a quick screen to running back Lamical Perine, who took it 16 yards to the end zone.

If that looks familiar, it should; Herbert threw a lot of screens at Oregon. He’s capable of making every throw on the route tree, and he we saw glimpses of that arm strength on Saturday. Herbert played just one quarter and when it was over, he was 9 of 12 for 83 yards and a touchdown, and was named the game’s MVP, despite the South falling, 34-17.

“It’s been a huge opportunity,” Herbert told NFL Network’s Tom Pelissero afterwards. “It’s been such a great week. It’s been busy. We’ve been tested but we’ve had a lot of fun. Would’ve liked to have own this game, but we played hard and really enjoyed spending time with the guys.”

Herbert passed his first test of the pre-draft process with flying colors. And that will go a long way in assuaging concerns that NFL teams had during the 2018 and 2019 seasons. That may seem counterintuitive on some level — and, frankly, it is, but there’s something to said from seeing Herbert in person, watching what he’s capable of from just feet away, and talking to him about those inconsistencies that dogged him at times these last two years.

The reality is that the hard part is over for Herbert; he’s been poked, prodded and quizzed the last week only to ball out on game day. And now he only has the NFL combine (where he may choose to just meet with teams and not participate in drills) and his scripted pro day. Put another way: Even though his tape wasn’t consistently that of a first-round pick, he’s almost certainly going in Round 1, and he could even be the second quarterback taken after Joe Burrow.

If this week was all about Herbert and Jordan Love, Anthony Gordon was out to prove that he was more than “just the latest guy from Mike Leach‘s Air Raid offense.” Love, the Utah State star who has drawn comparisons to Patrick Mahomes for his playing style, had a quiet Senior Bowl game, going 4 for 6 for 26 yards. He wasn’t bad, he just had limited opportunities.

Gordon, meanwhile, has a good case for being the best player on the field at Ladd-Peebles Stadium on Saturday afternoon. The knock on him coming into the week was that he didn’t always make the best decisions with the ball at Washington State, as evidenced by his 16 interceptions. But as Gordon told CBSSports.com on Tuesday, his goal this week was to prove that he could minimize those mistakes, and that’s exactly what he did.

Gordon was often efficient and accurate during the three practices, even if he didn’t have the arm strength of Herbert and Love. But he showed during the game that arm strength is not, in fact, everything. Gordon’s savvy pocket presence served him well, and his footwork appeared improved from the 2019 season, when he would occasionally throw flat-footed, which led to off-the-mark passes that were sometimes intercepted.

He played the third quarter on and finished 8 of 12 for 69 yards and two touchdowns. And you could make a convincing case that he deserved MVP honors. Yes, Gordon’s first TD was to a wide-open Chase Claypool in the back of the end zone:

But Herbert’s lone TD pass came on a screen.

Gordon also showed off the quick release that saw him complete 71.6 percent of his throws last season:

That may have been his least impressive throw of the day. There was this pass to James Proche on third-and-9 that moved the sticks; he lofted it over the linebacker and just in front of the safety where only Proche could make a play:

And then there was the other touchdown toss, this time to Antonio Gandy-Golden:

The play breaks down and instead of allowing his eyes to drop, he knows exactly where Gandy-Golden is and puts the ball in the corner of the end zone.

A year ago, Gardner Minshew played in the Senior Bowl and didn’t have nearly the week Gordon had, and he ended up as one of the biggest surprises of the 2019 season after the Jaguars drafted him in the sixth round.

Don’t be surprised if Gordon hears his name called before then.

The other QBs were a mixed bag

Herbert and Gordon were the big winners, without question. And while Love had a quiet game, he had a strong week. Jalen Hurts leaves Mobile with almost as many questions as when he arrived. The athleticism is obvious, but we saw many of the flaws that plagued him down the stretch for Oklahoma crop up on Saturday. When his first read wasn’t there, his eyes would drop and he would look to run.

And when Hurts was a hair late letting it rip, he was punished; Bradley Anae had a huge game, in part because of this play:

But Hurts also flashed the ability that made him so dangerous for the Sooners. This was one of the best throws of the week, and a great route by Jauan Jennings, who had a strong week of practice:

Shea Patterson‘s game mirrored his week. He had a nifty 75-yard touchdown pass to Darius Anderson on a wheel route that went uncovered:

But he also airmailed an easy throw in the middle of the field that was intercepted by Kindle Vildor:

Steven Montez also had a tough outing. He conceded this week that he needed to improve his footwork, and several times Saturday suspect mechanics along with indecisiveness led to negative plays.

He doesn’t get the ball out on time and is sacked by Anae (there’s that name again) late in the third quarter:

A few plays later, Montez again doesn’t get the ball out on time and compounds things by trying to throw downfield with a player draped around his legs. The result was an easy interception for Troy Pride Jr.:

Montez has the physical tools to play in the NFL, but the lack of consistency means he’ll need to make up a lot of ground in the coming weeks and months.