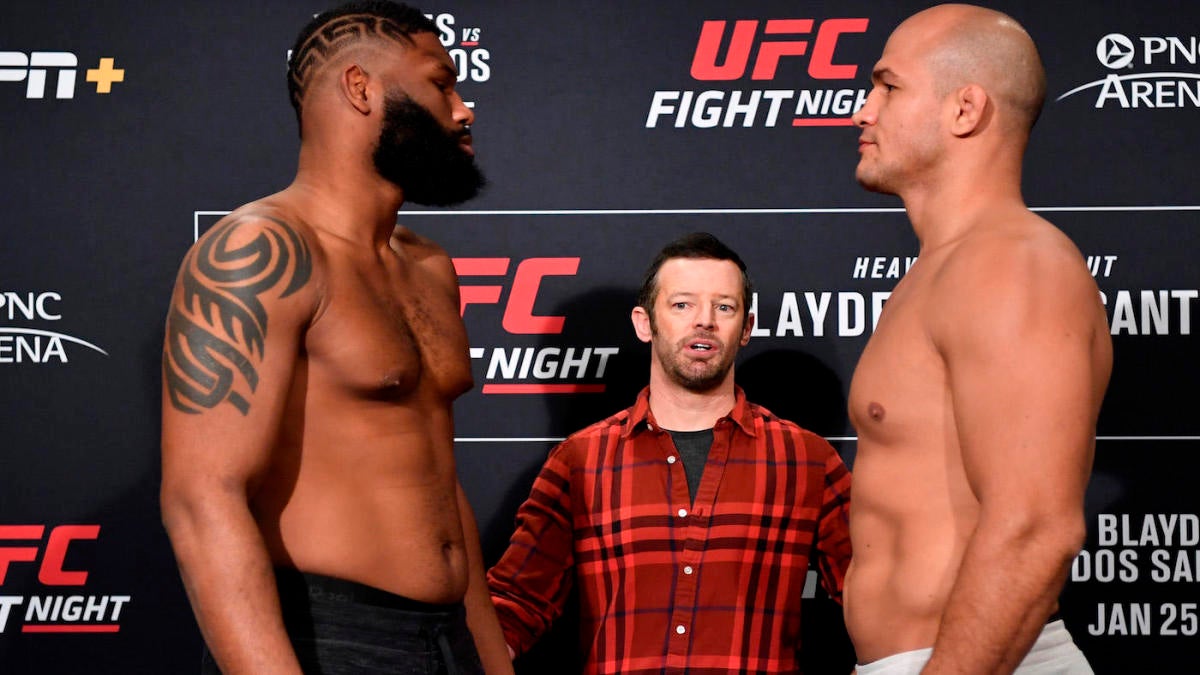 With the exception of a pair of run-ins against terrifying slugger Francis Ngannou, UFC heavyweight Curtis Blaydes has yet to meet a challenge he couldn’t succeed against in his six years as a pro.

As Blaydes (12-2, 1 NC) enters his first foray of 2020 on Saturday against former champion Junior dos Santos in the main event of a UFC Fight Night card in Raleigh, North Carolina, the thought of what’s at stake for the 28-year-old with a victory isn’t far off.

“When you get to headline, you know the UFC believes in you and believes you can put on a good enough show to be the main event,” Blaydes told MMA Junkie during Wednesday’s media day. “If I do well this weekend, I should be in title contention so let’s go.”

Taking a quick glance at the UFC heavyweight rankings reveals that Blaydes, a 6-foot-4 native of Naperville, Illinois, isn’t all that far off. Current champion Stipe Miocic is expected to face Daniel Cormier in a trilogy bout this calendar year and the only man with a stronger claim to face the winner is Ngannou, who twice finished Blaydes via TKO in his only defeats.

What makes Saturday’s fight so unique is that dos Santos (21-6) is fresh off a 71-second TKO loss to Ngannou last June that elevated “The Predator” to No. 1 contender status.

Blaydes, who most recently fell to Ngannou in just 45 seconds in 2018, said he doesn’t believe there is much anyone can learn by comparing his losses to the one JDS recently had because “[Ngannou] doesn’t give you much of a chance to show yourself.” Still, Blaydes is inspired by the chance to defeat such a legendary fighter in the 35-year-old Brazilian who is 3-1 since a 2017 title loss to Miocic.

“It would be nice to have another guy like him on my resume. It will only strengthen my argument for getting my first title shot,” Blaydes said. “I do believe that Junior is right there and still one of the best in the game so I know beating him would essentially certify my place as the next title challenger.”

Dos Santos isn’t willing to go away without a fight, not after he was forced to pull out for a scheduled main event in Moscow last November against Alexander Volkov because of a leg infection. His condition became dangerous enough that doctors told dos Santos he could’ve faced amputation if not death had he waited any longer to go to the hospital.

“It was extremely serious,” dos Santos told MMA Fighting last month. “I spent a week in the hospital thinking that I would get cleared and fight [Volkov] but the doctor came to me and said, ‘You don’t understand how serious this is.’ He said I was lucky to be a healthy man and that I went to the hospital soon enough, otherwise I could have gone straight to ICU.”

Asked to point out a weakness of dos Santos he may be able to take advantage of, Blaydes referenced his opponent’s inability to effectively strike while going backwards. Although Blaydes is expecting forward pressure to be a big part of his strategy, he believes the fight will be won or lost depending upon whether he can take it to the ground.

“As he has gotten older, [dos Santos] has pretty much remained the same guy. He’s well rounded but he hasn’t really added anything,” Blaydes said. “He’s Junior, he’s very good but I know that I have the advantages in the wrestling department. There are not many guys in this weight class — let alone the sport — who have my wrestling experience.”

It may have been eight years since dos Santos last wore the UFC heavyweight title but he has done a tremendous job staying relevant. JDS has never lost consecutive fights and has only tasted defeat against true elite. So how good exactly is Blaydes at this point? It’s the unknown that makes this such an intriguing fight.

While dos Santos remains a highly skilled boxer with legitimate knockout power, Blaydes has steadily evolved into one of the division’s best dual threats as a wrestler with a proven history of being able to finish fights. Blaydes will not only have youth and mileage on his side, he won’t have the same physical questions to answer after the combination of a long layoff and a serious illness.

Blaydes has looked great in his two wins since his last defeat and is 7-0 (1 NC) overall inside the Octagon against anyone not named Ngannou, including victories over Alistair Overeem and Mark Hunt. Even though Blaydes has never fought beyond the third round, there isn’t a ton of reason to fear he won’t be able to do so.

All four of dos Santos’ defeats since losing his title to Cain Velasquez have come via TKO. It’s time for the heavyweight division to take notice at just how good Blaydes can be.