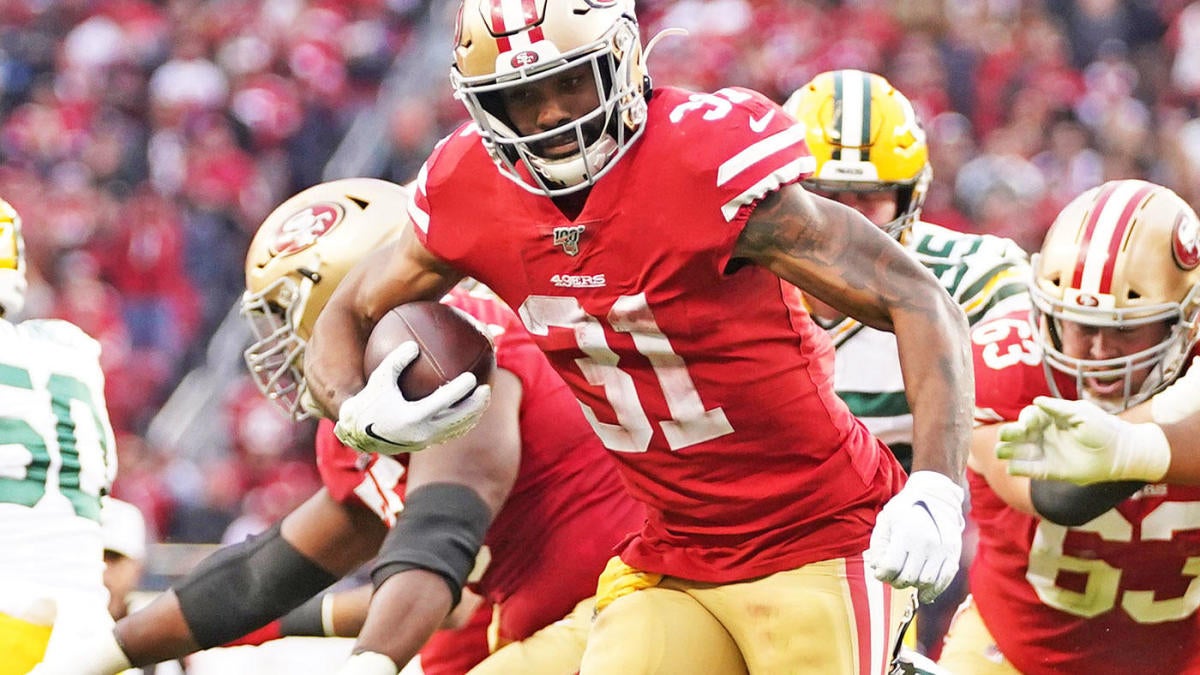 For a long time, “run the ball and stop the run” was the only way most people thought you could win in the NFL. Over the past several years, that has gradually been revealed as untrue. Passing the ball is simply far more efficient than running it; and studies have shown that the best thing you can do with a run is probably to fake it and then throw off of play-action, which has been shown to be effective regardless of whether you are running the ball effectively or not, or even running it at all.

Over the past two months or so, the San Francisco 49ers have been so effective running the ball that they have just about flipped that axiom on its head. From their Week 12 destruction of the Green Bay Packers through their NFC title game destruction of the Green Bay Packers, the Niners called for a run on 53 percent of their offensive plays, per Sharp Football Stats. Normally, this would be inadvisable. But the Niners managed 5.4 yards per carry and a 55 percent success rate on those running plays, which is better than the success rate that any NFL team had on pass plays this season.

How did this team manage to turn inefficient plays into efficient ones? Through a combination of personnel, play-design, and a commitment to fakery that surpasses that of anybody else in the league.

The personnel part is the easiest to explain. It starts up front, with stalwart left tackle Joe Staley, 2018 first-rounder Mike McGlinchey, and the combination of Laken Tomlinson, Mike Person, and both Weston Richburg and his injury replacement Ben Garland on the inside. That group was the fifth-best run-blocking unit in the league this season, per Pro Football Focus, and they received assistance from arguably the best blocking fullback (Kyle Juszczyk) and tight end (George Kittle) in the whole league.

Those guys cleared the way for a stable of running backs that might be the fastest in the NFL. NFC title game hero Raheem Mostert ran the 40-yard dash in 4.31 seconds. Free-agent signee Tevin Coleman, who gained extensive experience in head coach Kyle Shanahan’s offense during their time together in Atlanta, ran it in 4.39 seconds. And after running 4.48 seconds at the combine, Matt Breida ran it in 4.38 seconds at his pro day. These guys can scoot.

The design of Shanahan’s zone-based running schemes allows those backs to gather a full head of steam as they make their way through holes in the line of scrimmage, picking up chunk gains in the process. And while the marriage of scheme and players is perfect, the Niners complement that marriage with a cavalcade of shifts and motions and fakes intended to confuse the defense about where the ball actually is, who has it, and where it’s going.

The 49ers used pre-snap motion on 72 percent of their running plays this season, per Sports Info Solutions, the highest rate in the league. They had someone in motion at the time of the snap on 22 percent of run plays, the fifth-highest rate in the league. NFL teams averaged 4.9 yards per carry on run plays that included motion at the snap compared to 4.0 overall, per SIS, and a similar trend held for the Niners, who averaged 5.4 per carry with motion and 4.3 per carry without it.

But the effort to confound doesn’t stop there. San Francisco utilizes the most dizzying array of fakes in the NFL, and those fakes have to be respected because Shanahan will give the ball to pretty much any player at any time, in any way imaginable. If somebody goes in motion or looks like they’re going to take a hand-off on a jet sweep or an end-around or an option pitch, there’s a reason behind that action, and usually a counter to it as well.

All of this scheming is based around one thing: outside zone. Outside zone calls for the entire offensive line to flow in the same direction, while the running back takes the ball laterally outside of the tackle box before planting his foot in the ground and heading north-to-south through the first hole he sees open up in the line.

San Francisco’s three running backs are all perfect fits for this specific run scheme, with a combination of patience, vision, and burst that allows them to wait for a hole to open up, see that hole, and then explode through it for chunk gains. The 49ers run this concept more than almost any team in the NFL, and they execute it better than just about everybody else, too. According to Sports Info Solutions, the Niners’ 205 outside zone runs were fourth-most in the NFL this season, and their 1,008 yards on those plays were third-most.

But San Francisco doesn’t always just run the outside zone straight at the defense. They’ll dress it up a bit on occasion, sending a blocker from the front side to block the backside defensive end in what’s typically called split zone action. Using that one blocker flowing in the opposite direction of the actual play provides just a little bit more space for the running back, allowing him to break into the open field.

Just when the defense thinks it’s got the outside zone schemed up, the Niners will fake it and flip the ball to Deebo Samuel on an end-around. Samuel has enough speed to beat any defender to the edge anyway, but one thing this team loves to do is have Kyle Juszczyk or George Kittle flow around to the outside with him. They’ll have one of those guys fake like he’s blocking toward the zone side, then wheel around in the backfield and lead the way for Samuel toward the opposite side of the field. They send Samuel out to the side by himself in the first of the runs in the clip below, but keep your eye on Kittle and Juszczyk in the next few, and how their fake blocks help sell the reality of the zone run and allow Samuel to get moving upfield before they come and flatten the first defender in his way of hitting the edge.

When they’re not using a pure zone scheme, the 49ers love to attack with counter runs. They’ll even run the exact same counter play twice in the same game, in opposite directions, as they did in the season-opener against the Bengals. And in much the same way they do with the split zone and the end around, they often use one of their blockers to help sell the fake. Again, watch the route Juszczyk takes on his blocks in the clips against the Steelers, Browns, Rams, Seahawks, and Falcons in the video below. He’s arguably the key to the whole play.

The fakes don’t stop there. Jimmy Garoppolo is arguably the most committed quarterback in the league to selling one particular fake. It’s the kind of thing that quarterbacks are taught in the lowest levels of football, but eventually stop doing as they move up through high school and college to the pros: carry out every run play as if it’s a pass. Even if you hand the ball off, continue your rollout to the opposite side. If you can hold just one defensive player in place for even a half-second and keep him from flowing to the ball, you provide just a little bit more room for the running back as he makes his way to the hole.

Watch Garoppolo in all the clips below, faking a throw to his receiver after handing the ball off for a shotgun sweep. This is the kind of little thing that makes a difference on the margins, and helps turn running from an inefficient choice into an efficient one. The final clip in the video below exemplifies this perfectly, as Gerald McCoy gets frozen in his tracks by the fake when he has a clear shot at taking down Tevin Coleman in the backfield, but the play instead results in a touchdown.

As we mentioned earlier, the 49ers also use pre-snap and at-snap motion more than any team in the league. But they don’t motion guys just for the sake of it. They integrate that motion into the run game. Like a lot of coaches from his father’s coaching tree, Kyle Shanahan has a particular affinity for jet motion. But the Niners usually don’t hand it off to the jet motion guy: according to Sports Info Solutions, they ran only six jet sweeps all year. On the other hand, they ran 32 plays that included both jet motion and a fake hand-off, giving them the seventh-highest rate of such plays in the NFL.

Just as they do off of the outside zone plays, the 49ers will also iterate off of their jet motion plays. They’ll run reverses. They’ll fake a jet sweep one way and run inside power run behind it. They’ll show that exact same look and flip the ball back to a receiver moving the other direction to run a variation of a flea-flicker. And they’ll run an actual option play, with Juszczyk as the trigger man reading the edge defender and making a pitch to the running back, who can then turn the corner. They might very well lead the league in plays where at least three players touch the ball.

All of these concepts and more worked so well for the 49ers in the NFC title game that Garoppolo only had to throw eight passes. Raheem Mostert had a game for the ages and that was enough to send the team to the Super Bowl.

The Chiefs‘ run defense was worse this season than even that of the Packers. If you had to pick a weakness for them then run defense would be it. But it’s been much better in recent weeks, over just about the same time period that the Niners’ run game has become unstoppable. Kansas City just shut down Derrick Henry last week, and he was on a run the likes of which nobody had ever seen before. San Francisco can’t count on the same performance on the ground in the Super Bowl that they had in the NFC title game, and they can’t count on only needing to run the ball and never having to throw. But if and when they do run, they’re highly likely to find success. That success forces adjustments from the defense, and that’s when Shanahan starts getting really creative.