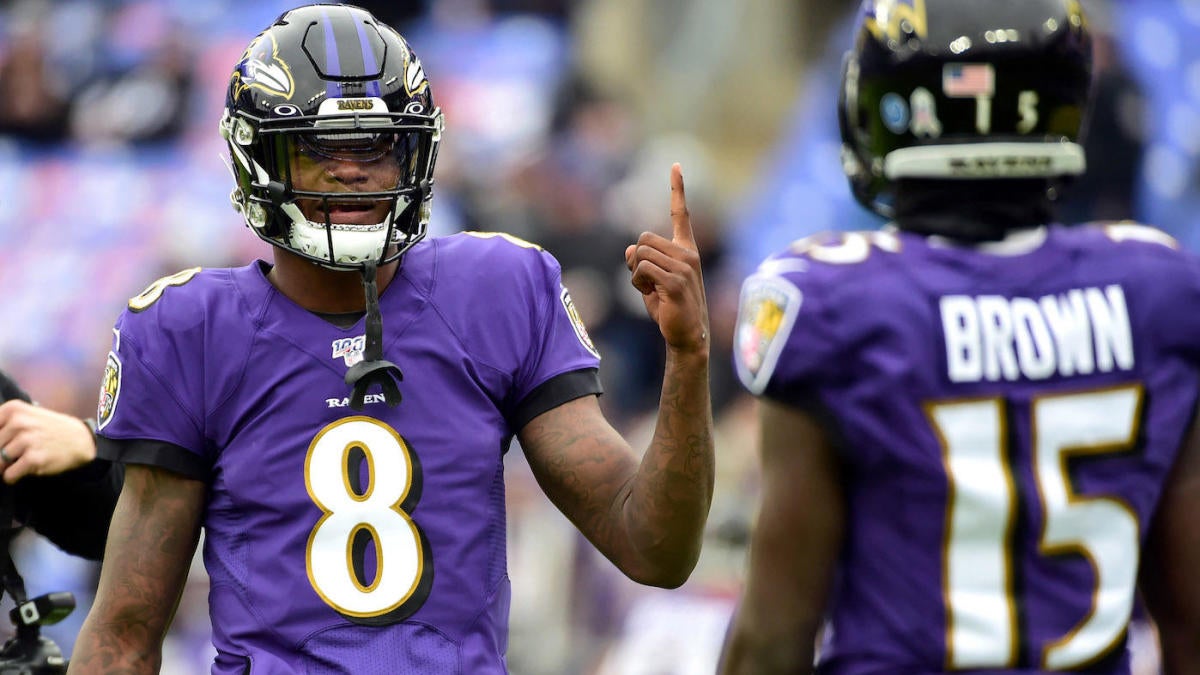 The Baltimore Ravens finished with the best record in the NFL at 14-2, and were the Super Bowl favorite before they ran into a brick wall in the postseason. The Ravens fell to the Tennessee Titans, 28-12, in the divisional round, but this season marked a new era in Baltimore.

Lamar Jackson is the favorite to win the MVP award after throwing for 3,127 yards and 36 touchdowns. He also rushed for 1,206 yards and seven touchdowns. The 23-year-old was the most explosive player in the NFL, and he was surrounded by a couple of weapons that helped him take his game to another level.

Mark Ingram rushed for over 1,000 yards this season, Mark Andrews was one of just three players in the NFL to record 10 or more receiving touchdowns and Marquise Brown proved to be worth the No. 25 overall pick the Ravens spent on him in the 2019 NFL Draft.

“Hollywood” Brown wasn’t the most consistent offensive threat for the Ravens, but Jackson knows he’s going to be a star in this league.

“Even though he was hurt with his foot, he still felt like he should be Julio (Jones) already,” Jackson told Jamison Hensley on ESPN on Thursday. “I told him, ‘Bro, you’re good. Your foot not already 100 and you’re making plays.’ This year, he’s going to be dangerous.”

Julio Jones of the Atlanta Falcons may be a much larger receiver than Brown, but Jackson has a point in saying that his future No. 1 wideout can be a big-play receiver in the NFL.

Brown played in 14 games and made only 11 starts, but still recorded 584 receiving yards and seven touchdowns. Both of those numbers ranked No. 1 among Ravens’ wideouts in 2019. He also caught seven passes for 126 yards in the Ravens’ one postseason game against the Titans.

The former Oklahoma star fell down draft boards after he injured his foot in the Big 12 Championship Game last year. The Ravens took a flier on him, however, even though he had to begin training camp on the NFI list. Brown got the start in the season opener against the Miami Dolphins, and had performance that dropped jaws around the NFL.

In the 59-10 victory, Brown played 14 snaps and caught four passes for 147 yards and two touchdowns. According to ESPN, he became the first player in NFL history to record multiple 40-plus-yard touchdown catches in a debut.

Brown’s snap count and games he was active in fluctuated throughout the season due to his foot/ankle injury. While many want to question his durability, there’s no doubt he’s a legitimate star when healthy. Back in Week 12, Jackson saw he had a mismatch with Brown on the outside. No one could cover him whether he was running a slant pattern or a quick out route. Brown caught the first two touchdowns of the game, and finished with five catches for 42 yards in the impressive 45-6 victory.

Whether running a fly route or just a quick inside pattern, Brown has proven he’s already one of the quickest receivers in the NFL, and he should play a big role in 2020.