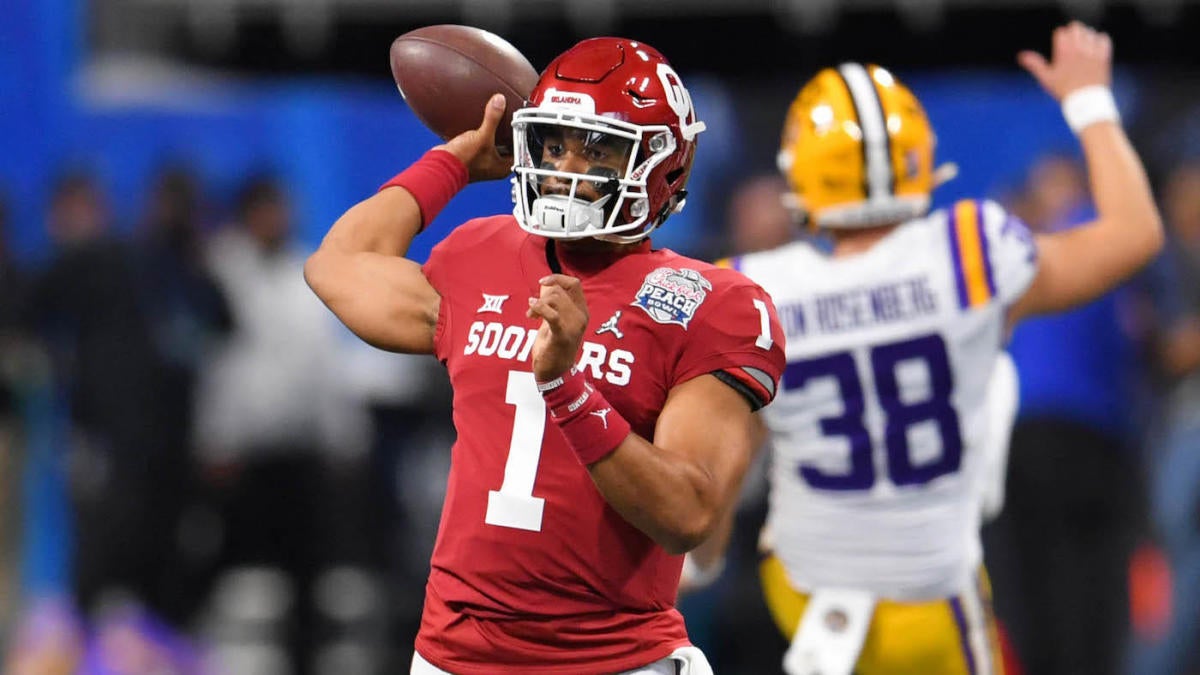 MOBILE, Ala. — The 2020 Senior Bowl practices concluded Thursday afternoon, and for the six quarterbacks it was their last chance to impress the assembled scouts and general managers before Saturday’s game at Ladd-Peebles Stadium.

We’ve written previously this week about how the quarterbacks have fared in new surroundings, with new teammates and coaching, and under the glaring spotlight that will determine where they’ll be drafted in less than four months.

Here’s how Justin Herbert, Jordan Love, Shea Patterson, Jalen Hurts, Anthony Gordon and Steven Montez looked during Thursday’s session, which was moved indoors to the University of South Alabama because of rainy conditions.

It’s been pretty much Groundhog Day for Herbert this week and that’s a good thing. He’s been impressive, starting with his measureables (6-foot-6, 238 pounds), athleticism and arm strength. He’s thrown tight spirals every day, and he has been accurate too.

The biggest hurdle he needed to overcome this week — and we’ve written about it repeatedly — is his ability to command the huddle.

Questions about leadership have plagued him throughout his career at Oregon and it was one of the first things he mentioned to us when we spoke to him Tuesday. In watching those in-between moments, his Senior Bowl teammates appear to respond well to him, and while it’s hard to discern any “leadership qualities” during practice sessions, Herbert’s on-field demeanor is indistinguishable from the other five quarterbacks. Put another way: His physical tools are undeniable and given his strong showing this week, we’re almost certain that he will find his way into the first round of the 2020 NFL Draft.

Like Herbert, Love had a lot to prove this week, and he’s gone about doing just that. He wasn’t quite as sharp during Thursday’s session — he missed with a few passes during 7-on-7 — but he was still very, very good.

To recap: Love has arm strength for days and athleticism that draws comparisons to Patrick Mahomes. But Love’s 2019 season was tough to watch at times. That can be attributed to all the new faces on the Aggies’ offense but also, as Love told us this week, to him trying to do too much and forcing throws, many of which ended as one of his 17 interceptions.

Still, there is so much to like and that was obvious in each of the three practice sessions.

Now NFL teams have to figure out which Love they’ll be getting; the one who forces things, or the one we saw in 2018 and again this week. Love didn’t play like a first-round pick during his junior season but we will not be surprised if he’s one of the first 32 players selected.

Patterson had a tough outing on Wednesday; he struggled to accurately throw the ball down the field, he had two passes batted down at the line of scrimmage during 11-on-11s, and microphones caught North Team coach Matt Patricia giving Patterson an earful about mishandling the center-QB exchange.

To Patterson’s credit, he looked like a different person on Thursday. His passes found their intended targets more often, we saw arm strength that was lacking the day before, and he looked to be playing with more confidence.

These are all positive developments, but the reality is that Patterson has to prove himself through the pre-draft process because of his uneven 2019 campaign and the fact he only stands 6-foot-2. During his final season at Michigan, he reminded us at times of Trace McSorley, who played in last year’s Senior Bowl and was a seventh-round pick of the Ravens last April. And that athleticism was on display Thursday too.

As it stands, Patterson is likely a late Day 3 pick, though a strong outing in Saturday’s game could certainly prompt some teams to revisit that conversation.

Hurts has somehow flown under the radar this week, which is interesting when you consider that he completed 69.7 percent of his throws last season for Oklahoma, with 32 touchdowns and eight interceptions. And that’s before we include the 1,298 rushing yards and 20 TDs. So while the spotlight has been on Herbert and Love, Hurts has quietly gone about his business.

You also can’t discount Hurts’ leadership ability. If we’re going to knock Herbert for his passive persona, we have to acknowledge that Hurts gets his teammates to buy in, no questions asked. (And they’re not alone, it turns out.)

Hurts came into the week as a likely Day 3 pick but he has Taysom Hill-type versatility, and there could be a team willing to take a Day 2 flyer on him, especially following a strong outing on Saturday.

Gordon hasn’t been flashy this week but he’s been consistent. And in a lot of ways, that’s more important. A year ago, former Washington State quarterback Gardner Minshew came to Mobile and had a tough week. Still, he was a Day 3 pick of the Jaguars and ended up being one of the best rookies in the ’19 class. Gordon is coming off a 48-touchdown, 16-interception effort for the Cougars, and he came into Senior Bowl week wanting to prove to NFL teams that he could limit turnovers while still racking up the big plays.

He doesn’t have the arm strength of Herbert or Love, but he shows the ability to snap off throws, moves well in the pocket and at no point seems overwhelmed by the task at hand.

In terms of physical ability, we like Gordon more than Minshew, but he will need to play with more consistency, and protect the ball better, to have success at the next level.

Montez came into the week needing to show that he can be more accurate (he completed 63 percent of his passes in 2019 with 17 touchdowns and 10 interceptions) and make better decisions. For the most part, he’s done just that. He quietly had a solid Tuesday and Wednesday sessions, and he was good again on Thursday.

The throw above was from Wednesday’s practice, but we saw much of the same throughout the week. Montez has flown under the radar here at the Senior Bowl but that has more to do with all the attention both given to both Herbert and Love and less about what Montez hasn’t done. He’s an intriguing Day 3 prospect who hasn’t done anything to hurt himself this week.