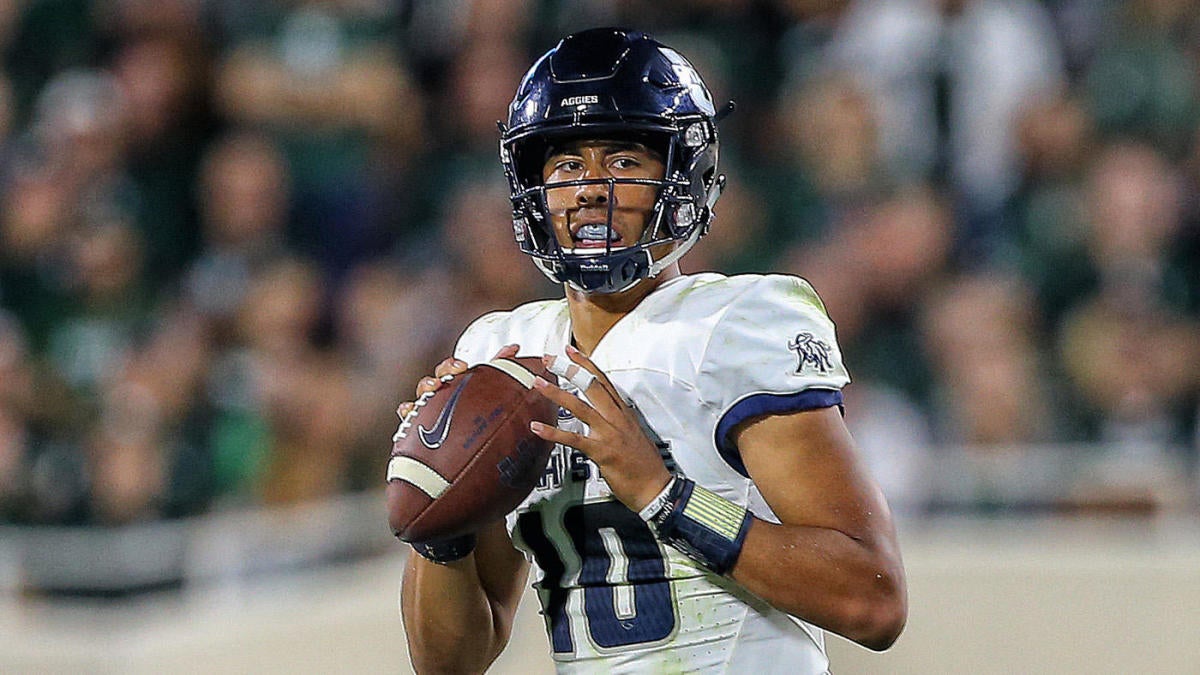 MOBILE, Ala. — A blustery and cold Tuesday gave way to slightly warmer and calm conditions on Wednesday, and for the six Senior Bowl quarterbacks, it was another opportunity to prove themselves to the scouts, coaches and general managers in search of the next franchise quarterback.

After the first day of practices we talked about the two biggest names here in Mobile — Oregon’s Justin Herbert and Utah State’s Jordan Love — who could both end up going in the first round of the 2020 NFL Draft. On Day 2, we’ll revisit Herbert and Love, but also look at some other quarterbacks hoping to parlay a good week into a spot on an NFL roster in the fall.

For more on the Senior Bowl, check out Chris Trapasso’s Wednesday wrap-up from Mobile.

Herbert’s arm strength has never been in question, and that arm was again on full display during Wednesday’s session. The former Oregon standout can make every throw, but the issue has always been with consistency, and sometimes ball placement. Can he consistently make those throws under duress, in the face of pressure, and place the ball over a buzzing linebacker and in front of a driving safety?

We’ve seen glimpses of that this week, including this throw to Florida wideout Van Jefferson, who is quietly having a very good week:

More of this and fewer instances of the off-target attempts and suspect decision-making, and Herbert will go from a top-32 selection to hearing his name called in the top 10, and perhaps as soon as No. 6, when the Chargers are on the clock.

It was no secret that if Love showed up in Mobile and balled out, he’d find himself again firmly in the first-round conversation. That’s despite a forgettable 2019 campaign that can be attributed to many factors, including a new coaching staff, a new offensive line, many new players at the skill position — and most importantly, a quarterback trying to do too much.

But Love’s physical talents are undeniable; the arm strength, the mobility, the ability to make plays from nothing — it’s all reminiscent of Patrick Mahomes, who in his second full season as an NFL starter is headed to the Super Bowl. And unlike Herbert, Love’s ability to feather deep balls between defenders has never been in question, and we saw what makes him so special during Wednesday’s session:

Note that Baylor‘s Denzel Mims was on the receiving in both times. Mims is a burner who is living up to expectations heading into the week.

Both Herbert and Love have shown well through two practices, but Love has been slightly better in our eyes. Either way, the reality is that a first round that likely had just one quarterback off the board a month ago could now feature as many as four if Herbert and Love’s stock continue to rise, and Tua Tagovailoa proves he’s healthy.

A year ago, Gardner Minshew came to the Senior Bowl after putting up dizzying numbers for Washington State in Mike Leach’s offense. Gordon bested those numbers — 800 more yards and 10 more touchdowns — but he also tossed seven more interceptions.

Gordon told CBSSports.com that those turnovers were mostly a function of him trying to do too much, and he intended to show NFL teams this week that he can take care of the ball while still putting up big numbers. He has a sneaky-good arm, moves well in the pocket, and as he pointed out to us, despite just one year as a starter for the Cougars, his 689 attempts is the equivalent of several seasons for most other quarterbacks.

Gordon is having a better Senior Bowl than Minshew did a year ago, and if he performs well the rest of the week there’s every reason to think he’ll get drafted.

It’s hard to get a read on how well Hurts has performed this week, mostly because his game is hard to evaluate in a controlled setting. Hurts is at his best when he’s on the run, and there’s not much to glean from a non-contact practice when he decides to take off.

That said, when Hurts did throw the ball he didn’t look out of place. That’s no surprise for anyone who watched him at Oklahoma.

Hurts is only 6-foot-1 but we haven’t heard anyone mention his “lack of ideal size” as a concern; thanks to Kyler Murray, Baker Mayfield and Russell Wilson, smaller quarterbacks are not only OK, you can win with them. Hurts got in trouble during the 2019 season when his first read wasn’t there and his eyes would drops as he looked to run. That won’t fly in the NFL, and he’ll need to prove to teams that he can operate inside the pocket before relying on his legs.

Patterson’s 2019 season can kindly be described as up and down. In 13 games he completed 50 percent or fewer of his passes five times, and he looked overwhelmed at times during Wednesday’s practice. He didn’t display the arm strength of Love or Gordon, the other North Team quarterbacks, and he struggled at times to throw a tight spiral. He also had issues with the getting the snap cleanly — North Team coach Matt Patricia made it crystal clear he wasn’t happy with the miscue — and had back-to-back throws batted down at the line of scrimmage during 7-on-7 drills.

But this isn’t the end of the world for Patterson; Minshew and Will Grier had similarly uninspiring weeks during the 2019 Senior Bowl and the former went on to play in 14 games for the Jaguars while throwing for 3,271 yards, 21 touchdowns and six interceptions. The latter was a third-round pick who could have a chance to earn more playing time in 2020 with Cam Newton‘s health still an unknown.